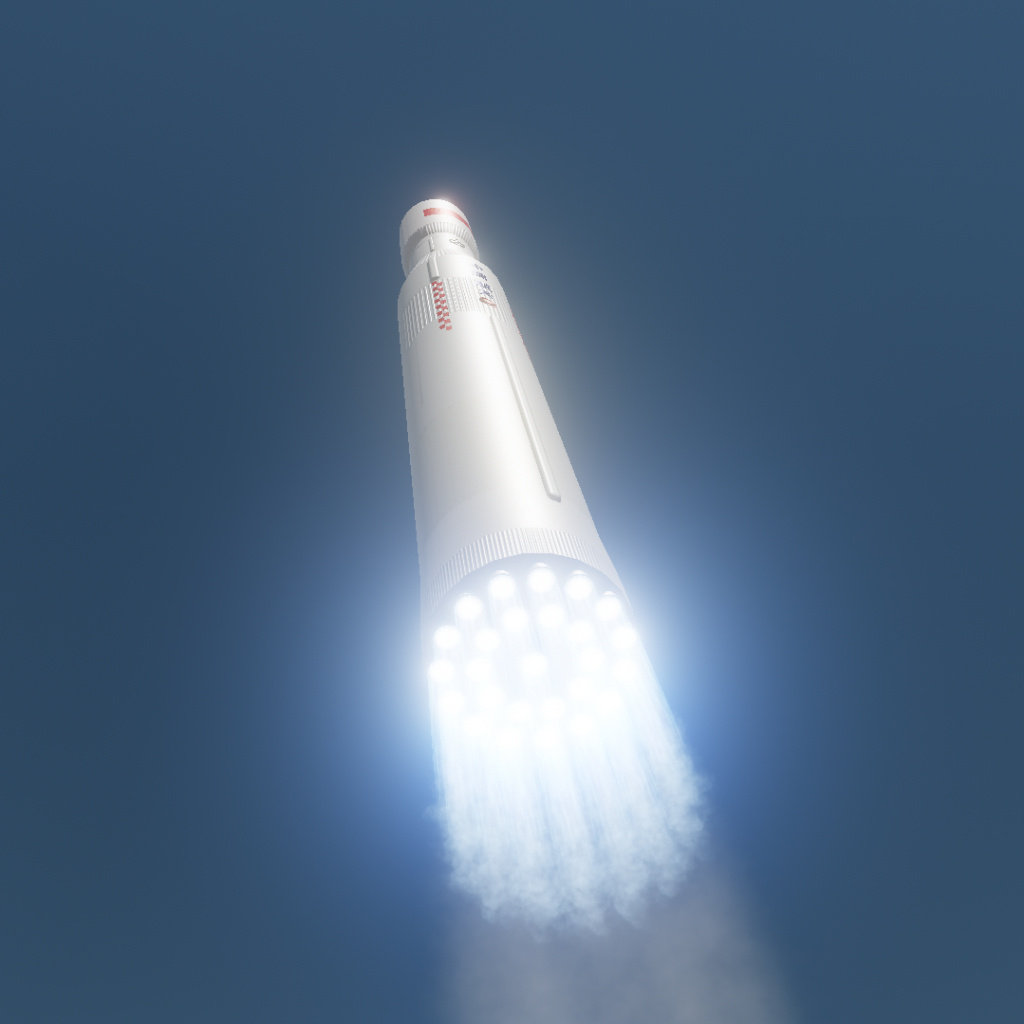 The Chang Zheng Long March 9 Ultra Heavy Carrier- Reusable Rocket  has a new polished rod configuration, with a thickness of 11 meters and a height of 111 meters or more, adding 10 new engines….Long Lehao ​​is the chief designer and general consultant of the launch vehicle series of the China Academy of Launch Vehicle Technology, an academician of the Chinese Academy of Engineering, and the deputy chief designer of the lunar exploration project. On March 23, my country’s seventh “China Space Day”, Academician Long Lehao ​​and a number of authoritative figures in the aerospace field were invited to the School of Astronautics of Beijing Institute of Technology. At the first report meeting, Academician Long Lehao ​​gave a lecture on aerospace knowledge and communicated with teachers and students. During this period, he announced the latest design plan of the Long March 9, which quickly attracted widespread attention.

Many friends know that Academician Long announced a new configuration plan of the Chang Zheng Long March 9 when he visited the University of Hong Kong just last year. It is often called “21 version of Chang Zheng Long March 9 (2021 version)” on the Internet. The new version released this year is basically the same. Yu overthrew last year’s version, so what about this 22nd version (2022 version) Long March 9? Let’s take a look first.

The picture above shows the latest version of the Long March No. 9 PPT screen released by Academician Long Lehao ​​at Beijing Institute of Technology on April 23 this year.

According to the composition and data of the 22nd version of Chang Zheng Long March 9, which appeared in Academician Long’s PPT presentation, this latest version of the Long March 9 continues the 21st version of the bare rod without booster configuration, but it is thicker and longer than the 21st version. Now, the core stage of the latter has a diameter of 10.6 meters, while the diameter of the 22 Chang Zheng Long March 9 has reached 11 meters, and both the first and second stage rockets are 11 meters in diameter, which is larger than the Saturn V used by the United States to land on the moon. (The diameter of the first stage is 10.1 meters) and it is nearly 1 meter thicker, which is also thicker than NASA’s SLS super-heavy rocket (the first stage of the rocket core stage is 8.4 meters in diameter) and Musk’s starship (9 meters in diameter). If it is successfully developed, it can be called the thickest rocket in history.

The picture above shows the size comparison of the three Long March 9 rockets and my country’s “Hainan” amphibious assault ship. The third from the left is the 2021 version of the Long March 9.

In terms of the diameter of the rocket, this is actually at least the third time that the Chang Zheng Long March 9 plan has become thicker. The design plan of the Long March 9 launched in 2011 has a diameter of 9.5 meters (another 4 boosters). It is 10.6 meters, and this year it has become 11 meters. It can be said that it is getting thicker and thicker.

Not only is it thicker and longer (or taller), it also has more rocket launches. In the key equipment components, the biggest change in the new configuration of the Long March 9 is its engine. The 2011 version of the Long March 9 design plan is equipped with four YF-130 liquid oxygen kerosene engines for the core stage rocket (a single thrust of about 480 tons) ,), each of the 4 boosters is equipped with 2 YF-130 liquid oxygen kerosene engines, so that the total thrust of the first-stage rocket can reach about 5,800 tons; The core three-stage rocket is equipped with four 25-ton YF-79 hydrogen-oxygen engines.

In the 2021 version of the Chang Zheng Long March 9plan, 4 boosters were abandoned, and the bottom of the core-level polished rod rocket was replaced with 16 YF135 liquid oxygen kerosene engines (a single thrust of about 370 tons). This design is similar to the original version. The thrust is the same, but the boosterless configuration becomes simpler, the aerodynamic efficiency is better, the weight is also reduced by 15 tons, and the launch efficiency is also improved.

But the most eye-catching change in the 2022 version of the Long March No. 9 plan is the engine. First, the number of engines has increased, and 26 200-ton liquid oxygen methane engines are used, and there is no model for this engine, so it should not be a project. The thrust of such a first-stage rocket is 5,200 tons, which is lower than the previous two versions, about 700 tons, but the carrying capacity has not been reduced. The transfer rail carrying capacity is 50 tons.

Moreover, this liquid oxygen methane engine is also the best choice for building a recyclable and reusable rocket. This is also the “Raptor” liquid oxygen methane engine that Musk must use to build the starship (the original thrust is 180 tons, and the upgraded version has a thrust of 250 tons) The reason for this, and the new version of the Long March 9 PPT picture released by Academician Long, the first design purpose of the program is “reusable” use, so this time the main focus is also the “reusable” function of Chang Zheng Long March 9.

The picture above shows the three “Raptor” liquid oxygen methane engines used on the starship.

Perhaps it is precisely because of the configuration of the liquid oxygen methane rocket and the various advantages of this engine that Academician Long Lehao ​​updated last year’s design with the 2022 version of the Long March 9 plan announced this year. This liquid oxygen methane rocket is also a giant The most ideal choice for rockets, it can even be recycled and reused in the future, and if the design is in place, the thrust-to-weight ratio of this engine will be very ideal, which also allows the volume of the engine to be made very small, so the lower end of the first stage rocket can be used. Install a number of liquid oxygen methane engines.

The number of engines of our rocket is not fixed. There are 29 to 32 Raptor engines under the first stage of Musk’s starship, and a maximum of 37 engines can be installed, but its diameter is only 9 meters. If we can develop If there is a liquid oxygen methane engine with the same thrust-to-weight ratio as the “Raptor”, then the number of engines that can be installed under the first level of the 2022 Long March 9 is not only 26, so the 26 engines mentioned by Academician Long are likely to be the minimum basic The version, if it is opened, can even put 50 “Raptor” equivalent engines under the super rocket with a diameter of 11 meters, and the thrust can reach 10,000 tons. If it can achieve 1/3 of the thrust upgrade like the Raptor, the total thrust can even reach With a total thrust of 13,000 tons, the carrying capacity can be greatly increased by 1 to 3 times.

Of course, this is only an idea at present. my country’s Long March 9 super-heavy rocket was approved last year. The manufacturing plan is basically the 2011 version of Chang 9. The various components used have also been rolled off the assembly line. It is estimated that in the next few years The assembly will be completed one after another, and the first flight will take place before 2029 at the latest. It will be a major power in my country’s aerospace field in the new era.

The picture above shows the interstage ring of the Long March 9, which is under development, and has already begun to be manufactured.

But this does not mean that the new version of the Long March 9 will not be manufactured. What Long Lao proposed is an improved optimization plan. It is not only the digestion, absorption and re-innovation of the world’s advanced aerospace technology, but also represents the future development direction of my country’s aerospace industry. The two Chang 9 versions proposed by Long Lao in the past two years are both bare-rod and non-boosted configurations, indicating that this configuration of the Long March 9 giant rocket will become a new development direction, and maybe there will be better configurations in the future. , but at present, the 22nd version of Chang Zheng Long March 9 is the most advantageous configuration scheme…..

“The Paper” June 24, 2021 article “The Diary of Space Entering Hong Kong, the University of Hong Kong welcomes the 83-year-old Academician Long Lehao, and changes to the scene of chasing stars in seconds “