END_OF_DOCUMENT_TOKEN_TO_BE_REPLACED


It was a on at night with the Halloween Phantom of the Opera Moon on the 31st October 2017 in Auckland-New Zealand in which during that that day night it was clear remarkable in which latterly the cloudy started to gate crashed from the north..  During that same day it was the eve of Halloween in east coast where Space X had currently launched the South Korean television telecommunications Satellite KoreaSat5A.. on the following day over in the west coast at California is the multiple payload launch of the SkySat also Dove Satellites in one single launch by OrbitalATK in which both launches met its launch criteria besides waiting patience for the weather..

The Halloween moon at eighty two percent waxing gibbous.. in which the moon costume played the female Phantom of opera mask with the decorative Jade Rabbit eye

The sunset Halloween Moon with the Jade Rabbit..

The the crater Copernicus one of the promenade craters ..

Meanwhile on that same Halloween day, Southern Hemisphere wise at the Auckland Observatory-Stardome were running with Halloween theme night. With props of Tombstones suspended ghouls with decorative running spiders, flying bats, in which running in sessions of three Halloween thematic planetarium shows each come with Halloween loot treat swag…

Before the gate-crashing blanketing rain clouds that came rolling over from north as it ghost storyline the waxing gibbous Phantom of the opera moon in creating that Halloween look for the moon in view as the storyline the Jade Rabbit eye.. In which you can see the promenade features of the sea of the Apollo 11 landed sea of Tranquility also Apollo 17 landed  Serenity… among that the moon was moving away from the constellation Scorpio in which rising later as she headed towards the full moon- second quarter then onwards wanningly towards the New Moon..


As I’m keyboarding this post on the 29th October 2017 it’s the #ObservetheMoon is International Observe the moon night  in which the moon will be currently least sixty five percent waxing gibbous in which Luna the moon reveals more her full moon lacy cratered wedding dress towards on the fifth November 2017……..On  a relative  clear spring  Yesterday in Auckland New Zealand night in with during that week’s night sky in which was a previously week was a rain out week thought out the country in which as I’m keyboarding this post.. It has relativity retracted the clear fine day in replacing with a cloudy rainy day…  As it was 24th October 2017 the moon Luna shade with the Earth shadow at seventeen percent Waxing Gibbous in which was four day –nights ago from the New Moon in which the Earth Shadow casted giving a total Waning Gibbous on the 20th October 2017..

As the moon was trending towards the Waxing Gibbous in which unveiling the earth shadow Terminator lacy veil, in which showing her Luna cratered embroidery lacy wedding dress slowly, as Luna rises little later by little away from the Constellation Scorpio as itself too settles earlier among with the planet Saturn looking at averagely of one billion Kilometers away also one hour ago back in time..

the sunset crescent moon – looking at circumference shows it not round but with cratered mountains ..

during a sunset the four days-nights away from the new moon the moon glimmers with sunset glow..

As this week night on the 26th October 2017, Auckland Observatory-Stardome, in which while working during the past eight in the evening that interesting night interestingly noticing a very bright transiting object transiting from the constellation Scorpio towards the Southern Cross from westward to the south is the International Space Station in which nibbling tracking looking through the eight inch Meade … looking through the lens finding it was a flat H, in which seeing the main solar panels of the international space station, with the structural trust, in which in the center is the looking at the living modules of the space station itself, in which the main radiators in which lens flared the main central station’s central structure.. 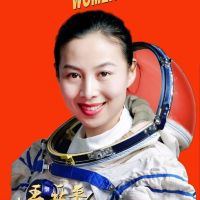