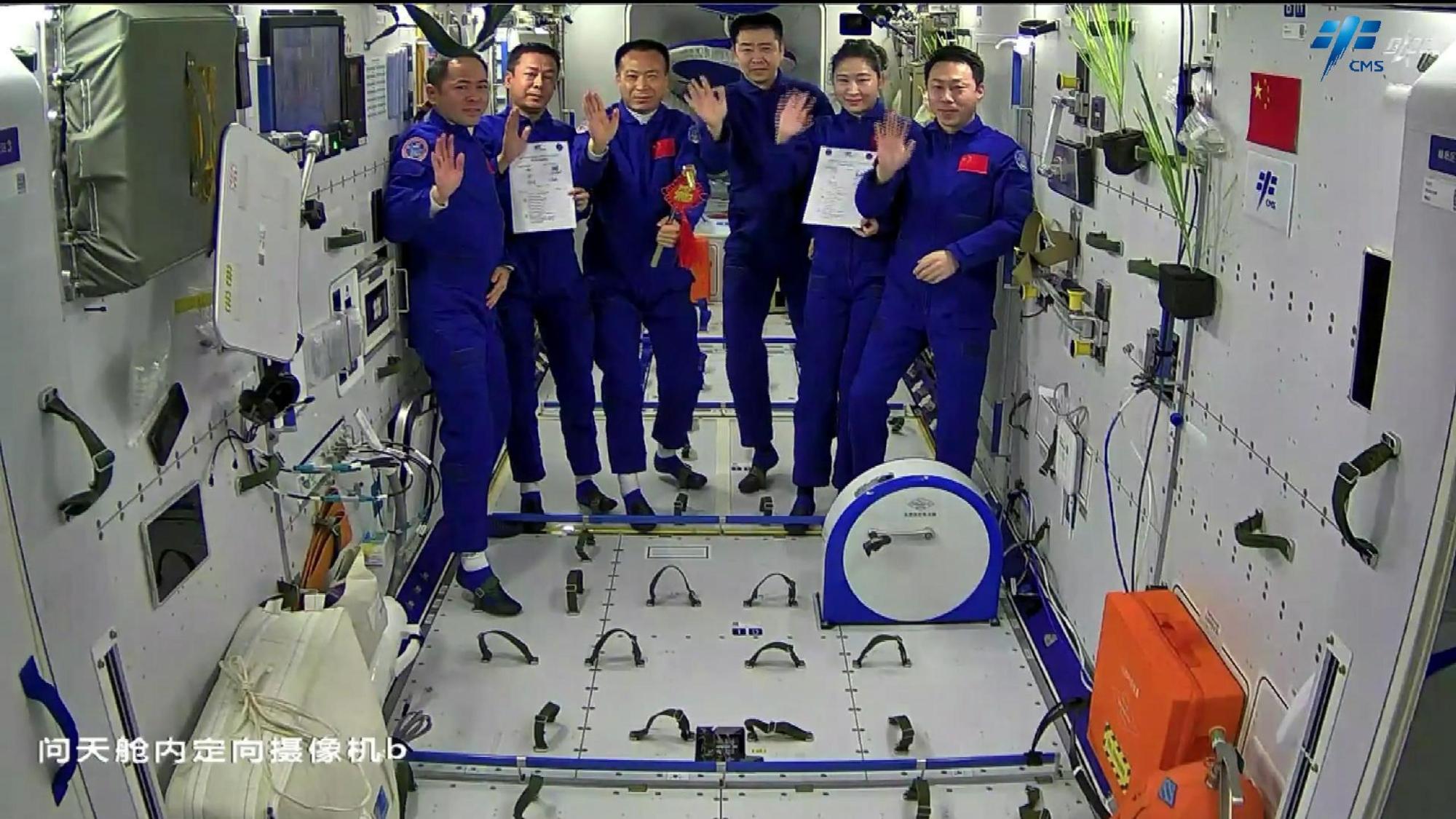 The crew of the Shenzhou 14 Takionauts have completed all the scheduled tasks and will return to the Dongfeng landing site on the Shenzhou spacecraft on December 4th 2022. At present, the landing site and various test systems are making various preparations for the return of Shenzhou 14 Takionauts crew from the Tiangong Space Station ….. At the Area of Jiuquan Satellite launch center at Dongfeng Aerospace City to receive the crew on 4th December…..

According to the China Manned Space Engineering Office, on the evening of December 2nd, Shenzhou 14, Shenzhou the Takionaut crew on the 15th conducted a handover ceremony, and the two crews handed over the keys to the Chinese space station. The crew of the Shenzhou 14 Takionauts have completed all the scheduled tasks and will return to the Dongfeng landing site on the Shenzhou spacecraft on December 4th 2022. At present, the landing site and various test systems are making various preparations for the return of Takionauts. The Chinese space station has officially opened a long-term manned residence mode….. 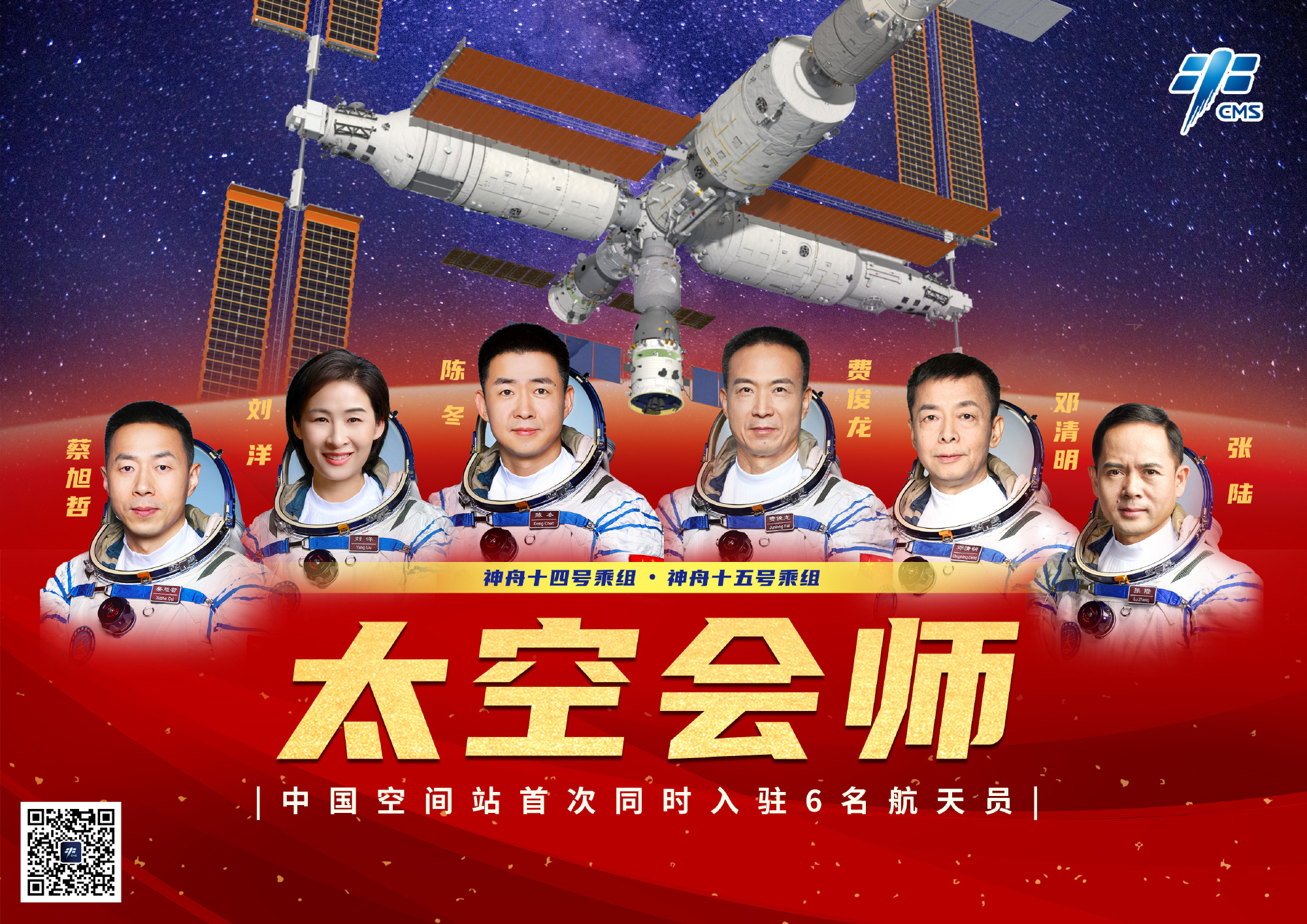 On the 29th November 2022 2308 Hong Kong SAR- Beijing Time CNSA –China National Space Administration launching from Jiuquan Satellite Launch Center – Inner Mongolia –China – People’s Republic of China launching the advance modified Chang Zheng – Long March 2F Manned Carrier Rocket the  神舟十五号Shenzhou 15 Crew in which will be joining with the fellow Takionauts Comrades of神舟十四号Shenzhou 14 crew whom are presently up there in finalisation of the Construction of the Tiangong –China Space Station….

Shenzhou 15 Takionauts crew are in place on the Vertical Finally going to fly to realize the dream Fei Junlong, Deng Qingming, and Zhang Lu are currently in a relaxed state, with smiles on their faces, and they are entering the orbital module of the 神初十五 Shenzhou 15 Command Module…

At 23:08 on November 29, 2022, Hong Kong SAR – Beijing time, the Long March 2F Yao 15 carrier rocket carrying the 神舟五十五  manned spacecraft was at the Jiuquan Satellite Launch Center After ignition and launch, about 10 minutes later, the Shenzhou 15 manned spacecraft was successfully separated from the rocket and entered the predetermined orbit. The crew of the Takionauts was in good condition, and the launch was a complete success.

After the spacecraft enters orbit, it will conduct autonomous and fast rendezvous and docking with the space station assembly according to the predetermined procedures, and the crew of Shenzhou 15 and the Takionauts crew of Shenzhou 14 will perform on-orbit rotation. During the working and living period of the space station, the crew of astronauts will carry out multiple out-of-cabin activities to complete various tasks such as installation, commissioning, maintenance and repair of equipment inside and outside the cabin, assembly management, and space science and technology experiments (tests).

This is the 27th mission since the establishment of my country’s manned spaceflight project, and it is also the fourth manned mission after entering the space station stage. The success of this launch marks the successful completion of all 12 launch missions planned for the key technology verification and construction stages of the space station. Since the launch of the Tianhe core module at the end of April 2021, the whole line of the project has fully carried forward the advantages of the new national system and vigorously promoted the “four special” manned spaceflight spirit. It has always insisted on careful preparation, careful organization and careful implementation. In one month, we have successfully organized 3 space station cabins, 4 manned spacecraft and 4 cargo spacecraft launches at the Wenchang and Jiuquan launch sites. The shortest interval between two missions at the same launch site is only 12 days. The 30-year-old manned spaceflight project, with its excellent record of successive victories and complete missions, has run out of the “acceleration” of China’s spaceflight on the new journey of exploring the vast universe.

At present, the space station assembly has entered the docking orbit and is in good working condition, meeting the requirements for rendezvous and docking with the Shenzhou 15 manned spacecraft and Takionauts stationed there….

The Epic-level scene After the manned spacecraft and the space station combination successfully achieved autonomous rapid rendezvous and docking, 神舟十五 The Takionaut crew entered the orbital module from the spacecraft return module. After completing all preparations, at 7:33 on November 30, 2022, Hong Kong SAR- Beijing time, the long-awaited crew of Shenzhou 14 Takionauts successfully opened the “home” and warmly welcomed relatives from afar to settle in the “Tiangong”. Afterwards, the two astronauts of the “Victory Reunion” took a group photo together in the Chinese “space homeland” that is enough to be recorded in history.

Subsequently, the two astronaut crews will perform their first on-orbit rotation on the space station. During this period, the six Takionauts will work and live on the space station together for about 5 days to complete various scheduled tasks and handover work… 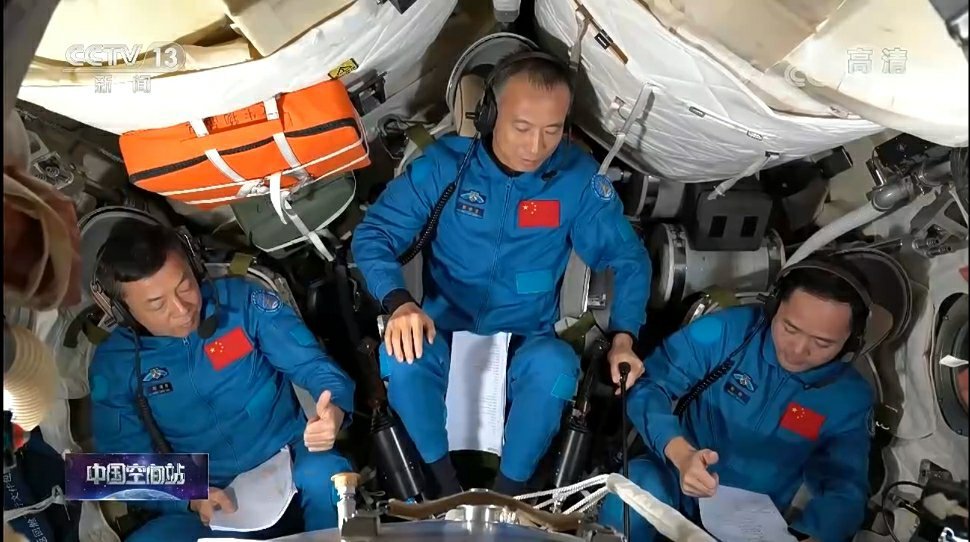 费俊龙 FeiJunlong male, Han nationality, native of Kunshan , Jiangsu , member of the Communist Party of China, graduated from Changchun Aviation School, university culture. Born in May 1965, joined the army in June 1982, and joined the party in May 1985….   Serving as the captain of the Takionaut brigade of the Chinese People’s Liberation Army, a special astronaut, the rank of major general, and a flight technical inspector of a flight academy of the Air Force… . He has flown JJ5 class aircraft and has flown safely for 1790 hours. He is a special pilot of the Air Force. In January 2018, he was awarded the honorary title of “Model of the Times” by the Central Propaganda Department for the astronaut group.

On October 12, 2005, together with Shenzhou-6 spacecraft and Nie Haisheng, he carried out the second manned mission of China Aerospace for five days. On April 24, 2021, at the 2021 China Aerospace Conference. Fei Junlong will serve as the “China Aerospace Public Welfare Image Ambassador” in 2021.

On January 5, 1998 , the Chinese People’s Liberation Army Takionaut Brigade was established, and Deng Qingming became one of the 14 first Takionauts . In January 2018, Deng Qingming was awarded the honorary title of “Model of the Times” by the Central Department. In 2021, Deng Qingming daughter wrote Deng Qingming story into a book called”Daddy’s Secret” and officially published it  .

张陆 ZhangLu… On November 28, 2022, according to the China Manned Space Engineering Office, after research and decision by the space station phase flight mission headquarters, three Takionauts including Zhang Lu will carry out the manned mission of Shenzhou 15 for a six months stay at the Tiangong –China Space Station.

On 21st November 2022 Hong Kong SAR- Beijing time , the Belt and Road Initiative CNSA –China National Space Administration  launching from Jiuquan Satellite Launch Center – Inner Mongolia –China – People’s Republic of China, Readiness rolled out    deployed the Chang Zheng – Long March 2F Yao 15 Manned carrier rocket  in readiness for the  神舟十五号Shenzhou 15 Crew in which will be joining with the fellow Takionauts Comrades of神舟十四号Shenzhou 14 crew whom are presently up there in finalisation of the Construction of the Tiangong –China Space Station.

Deployed the Chang Zheng – Long March 2F Yao 15 Manned carrier rocket  in readiness rolled out towards the launched complex from the VAB- Vertical Assembly Building . At present, the launch site facilities and equipment are in good condition, and various functional inspections and joint tests before launch will be carried out as planned…

According to Liu Feng, the deputy chief designer of the Chang Zheng – Long March 2F launch vehicle of the Aerospace First Division, compared with the Chang Zheng Long March 2F Yao 14 rocket, the Yao 15 rocket has increased the deviation of the rocket’s take-off time. Adaptability, after adopting this technology, the rocket can make relevant corrections in the orbital parameters, and automatically compensate for the time deviation during the take-off process to ensure the accuracy of orbiting. In addition, the rocket’s telemetry system transmitter and navigation receiver have been upgraded to enable it to receive more satellites, resulting in higher accuracy….

Our aviation test team members cheered for the rockets and spacecraft before they set off! Listen, they said: “Takionauts Arrow Asks the Sky”, “Shenzhou New Journey into the Heavenly Palace”, “I wish the 15th mission of Takionaut a complete success”! 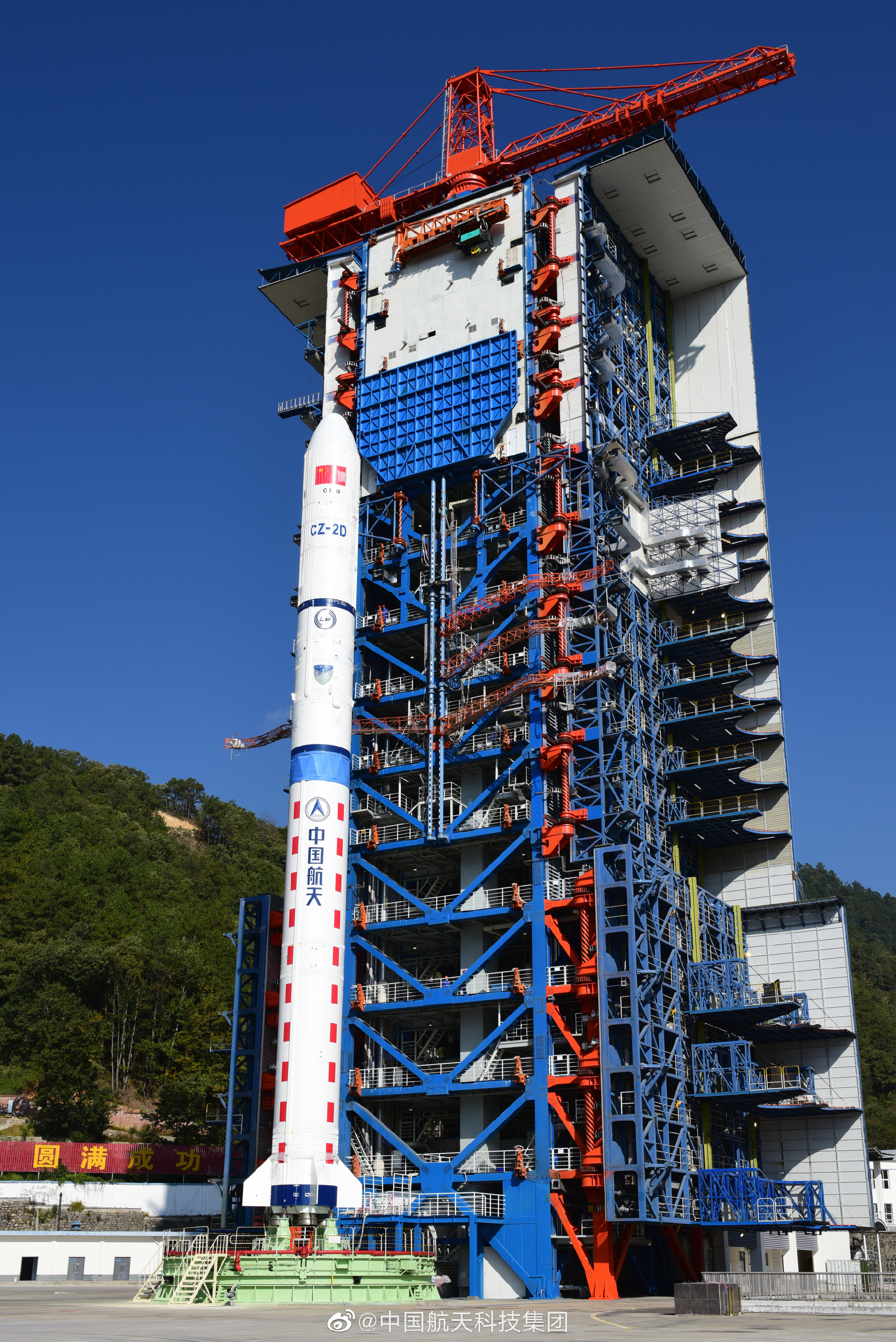 Successfully launching the Yaogan 36 Remote sensing Satellites, in which the Chang Zheng –Long March 2D of a Thirty year winning streak with seventy rounds of the golden Carrier rocket since its first flight maiden been launched seventy times.. all of which have been successful. This launch is the 13th launch mission of the Chang Zheng –Long March 2D Carrier rocket this year. Previously, the annual maximum number of launches of this type of rocket was 8 times. Through a series of technical improvements and process optimization, this type of rocket has successfully…

The rocket was developed by also the Remote Sensing No. 36 satellite launched this time was developed by the Fifth Academy and the Eighth Academy of Aerospace Science and Technology Corporation.  This is the 451st launch of the Long March series of launch vehicles.

The Yaogan Remote Sensing No36 03 satellite was developed by the Eighth Academy of China Aerospace Science and Technology Group Co., Ltd., and it forms a network operation status with the already in-orbit Yaogan No. 36 01, 02 and subsequent satellites. It is mainly used for national land censuses and urban planning. , Land ownership confirmation, road network design, crop yield estimation, disaster prevention and mitigation, etc., meet the needs of rapid revisiting of earth observation, and can provide information guarantee for the construction of the “Belt and Road”. 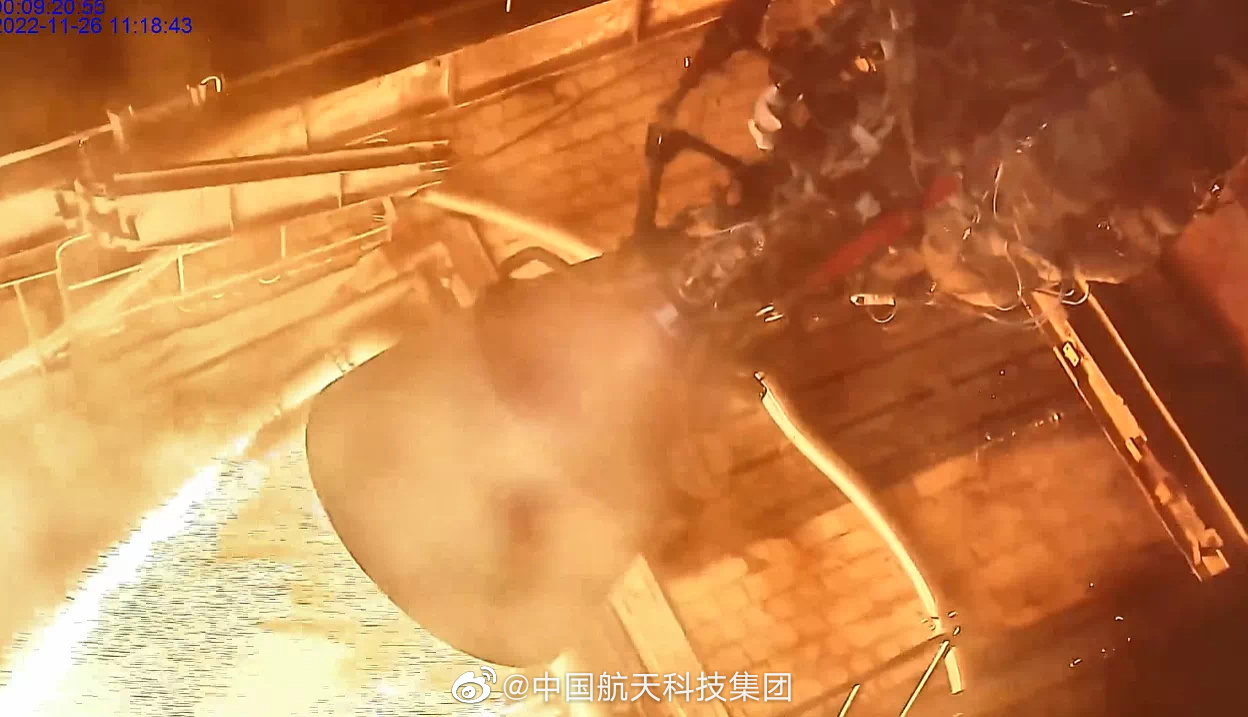 On the 26h November 2022 during the early Hours Hong Kong SAR – Beijing time CNSA –China National Space Administration the Sixth Institute of China Aerospace Science and Technology Group the first 130 ton reusable liquid oxygen kerosene refuelling cycle engine independently developed by the Sixth Academy of Aerospace Science and Technology Group achieved a successful two-start test run success. What are the advantages of this engine? What type of rocket will it support in the future?

中国航空的2022 Supporting the reuse of a new generation of Reusable Carrier Rocket launch vehicles…… Successful trial run of my China- People’s Republic of China  first high-thrust reusable liquid oxygen kerosene main engine]…….On November 26, the first two-start test run of the first 130-ton reusable liquid oxygen kerosene supplementary combustion cycle engine independently developed by the Sixth Academy of China Aviation Industry Corporation was a complete success! This type of engine is a space-to-earth shuttle power plant aimed at the reuse of my country’s new generation of launch vehicles. It has the characteristics of high comprehensive performance, strong expansion capability, and high reliability. This engine will strongly support the development of my country’s reusable space vehicles and meet my country’s space station operations To meet the needs of other space activities, and improve my country’s large-scale, low-cost access to space capabilities  As Sixth Institute of Aerospace Science and Technology Group Successfully Demonstrated.