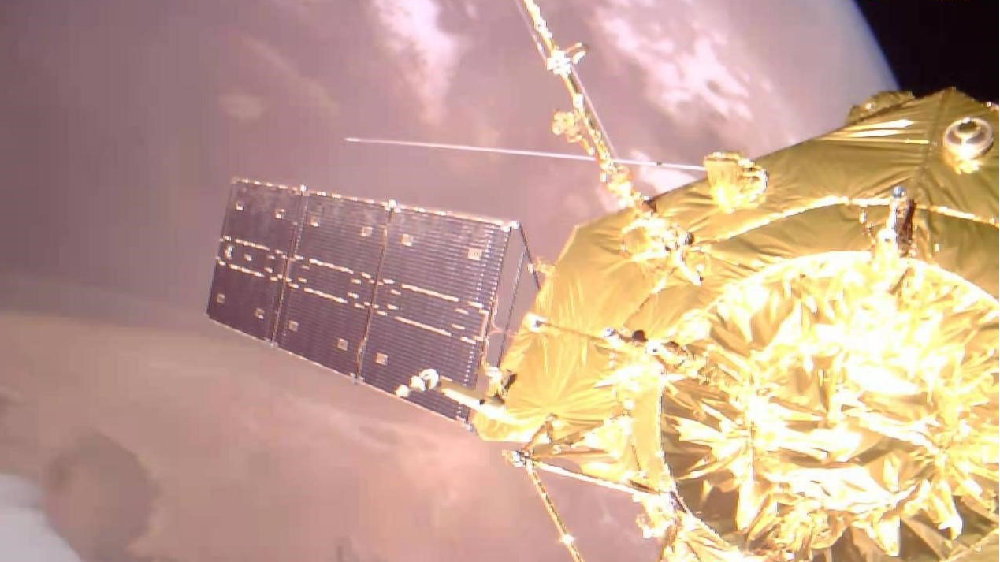 In Figure 1, the orbiter is flying over the north pole of Mars. The orbiter body is golden, the directional antenna for high-speed data communication with the ground is silver (under the orbiter body), and the solar wing is in good condition. The white area on Mars is the “ice” sheet covering the North Pole. Unlike the ice at the two poles of the Earth, the “ice” of Mars is composed of dry ice (solid carbon dioxide) and water ice. The dark area below Mars is the Olympia Shabo of Mars, the bright circular crater in the upper left corner is named Korolev Pit, and the remaining red and dark areas are bare ground.

In Figure 2, the solar wing on the side of the orbiter is fully deployed and the attitude is stable. An unfolded subsurface detection radar antenna is parallel to the solar wing, and the magnetometer extension rod extends to the upper left of the surround.

Figure 3 shows the Martian North Pole ice cap, the bedding is clearly visible. After years of deposition and ablation, it presents a spiral landform composed of a white ice layer centered on the pole and bare ground.

Figure 4 is a mosaic of 3 images acquired by the “Zhurong” Mars rover recently using a navigation terrain camera. In the figure, we can see typical Martian topography such as ring craters and rocks. As of December 31, 2021, the Tianwen-1 orbiter has been in orbit for 526 days, and is currently about 350 million kilometers away from the Earth. The communication delay is about 19.5 minutes. 1400 meters. At present, the Tianwen No. 1 mission is carrying out detection and related tests as planned, and a total of about 560GB of raw scientific data has been returned. The two devices are in good condition and operating normally.

Images and visuals are from CNSA- China National Space Administration also from there respectives..