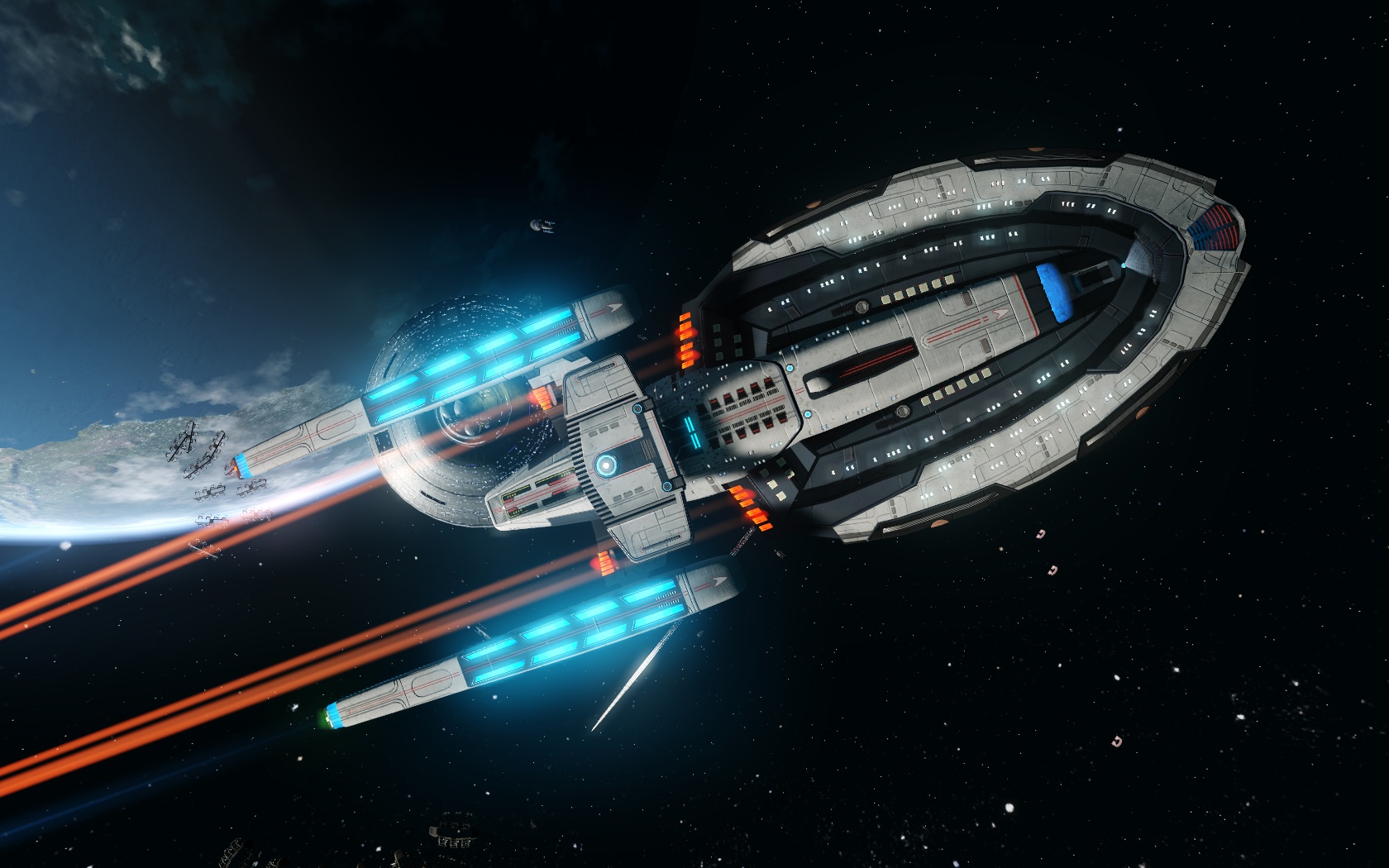 As you many recollect some years ago that there was a Tier five Vesta class among with her sisters the Aventine, Rademakers were successors of the intrepid class, featuring all valve lessons learnt from the Crew of the Voyager also it’s one of the first ship classes to utilized the Slipstream warp drive technologies.. As that design branches out into the Avenger towards the Star-Odyssey class starships with its unique deflector dish unit… The Vesta Class- USS Aventine was seen in action with Captain Ezri Dax whom was previously known as Jadzia……

“The Tier six  Multi Mission Explorers, The Esquiline,  Brigid, Palatine classes” have an average length of least 672 meters long that least 200 meters longer than the ICC and IFC building in Hong Kong.. Brigid is the daughter of the Rademaker class, with its wider delta saucer section… also with its sleek slender like body like wearing a full length silk Qipao dress,  a silk oriental jacket with an evening heels to go in which akin towards too the Star-Odyssey class..  Design wise Brigid has taken mostly of the Pathfinder  class elements among with it noting the slipstream deflector dish housing it’s no neck to been seen with it, in breaking tradition with its standard Starfleet design doctrine…. With its lowered warp nacelles also its support sanctions…

Among with the three, daughters of the, come with various console that can be found within the Esquiline, Brigid, Palatine… with the Esquiline-operational/engineering, is  Omni-Directional Tachyon Wave siphon device that that shield energy drains of nearby targeting ships in the same time of creating a secondary shield layering of your own..  The second is found in the Brigid – Isometric Discharge Array that’s firing a massive Electrical discharge blast of your intended Target or in plural sense..   The third can be found in the Palatine Class- in which a Radiation Bombardment Matrix in which does some serious radiation damage to whom enter the cone of path of the release …..  once you have all three console sets installed, it’ll increase your Maximum Shielding hit points, Auxiliary power  also a decrease of your recharge times.. Also its best to install the previous three set items form the tier five Vesta class in will give you an extra advantage…  also it’s the ship can be heavy modified as with three Tactical/ Engineering and five science ..  It does come with some two universal bridge stations in which one Lt. Universal, Lt. Commander Universal/ Temporal operative Console Modifications among other bridge consoles…

The Brigid Class is clearly a Science class; however you could load up the ship with full arrays of dual cannons, turrets torpedoes in an arrangement… or just with beam arrays with torpedoes… Given with its plus five in weapons power and plus fifteen in Aux power… So a fleet Aux to weapons warp reactor would provide that sufficient power to those systems…the Esquiline, Brigid, Palatine all comes with hanger bays, in which it’s sort of a medium shuttle carrier based ship which provides an extra level off shielding and Defense… the ship is extremely flexible to move around for it’s size, in which you can get in very close to attack