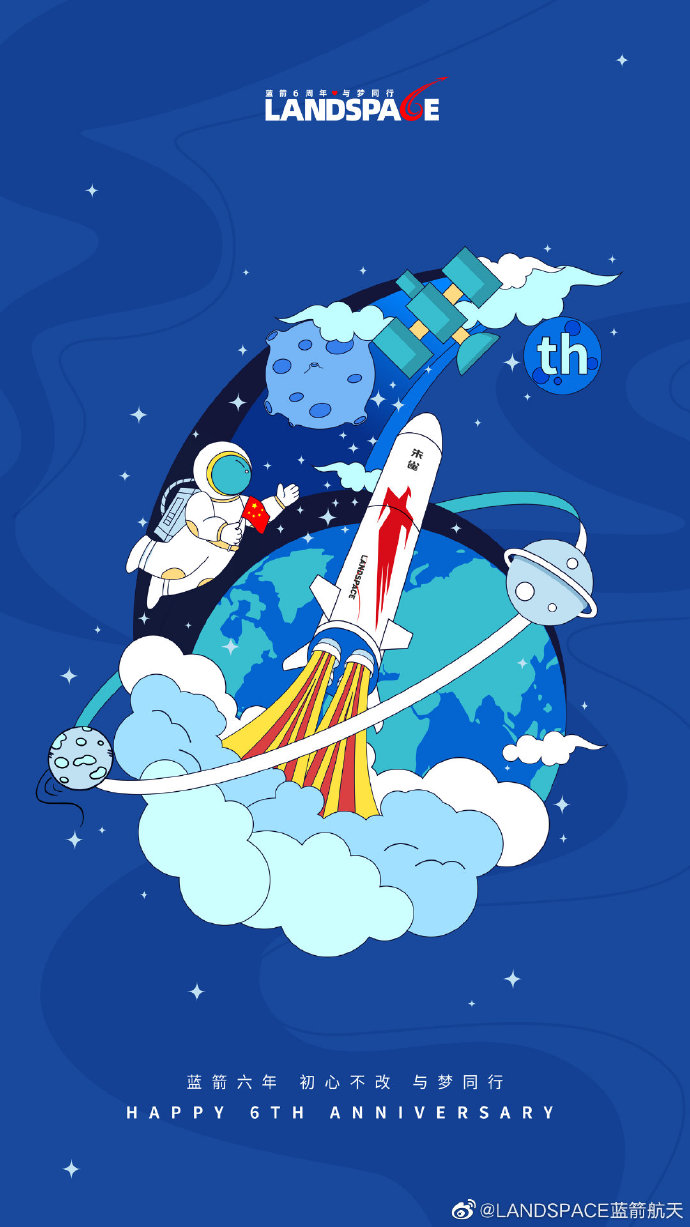 Celebrating LandSpace –Blue Arrow Aerospace 6th year Anniversary in operations with a strong message “初心不改，与梦同行 ​​​​- Do not change the original heart, walk with the dream “in which founded on 4th June 2015 Thursday founded in Beijing now located  now One of sixty plus Chinese private space Carrier Rocket Companies in China-People’s Republic of China..   , LandSpace Blue Arrow Aerospace … located in Beijing (Zhonghang International Plaza, No. 13 Ronghua South Road, Yizhuang Economic and Technological Development Zone, Beijing as their main head office in Land Space’s headquarter, Beijing R&D Center is located in Beijing Economic and Technological Development Zone in E-town…  in which they also have numerous branches in Xian Research and Development Center.. Also Located Huzhou Intelligent Manufacturing center in providing testing as assemblies of the components together …

In which previously LandSpace 蓝箭航天 One of sixty Chinese private space Carrier Rocket Companies in China-People’s Republic of China…   , LandSpace Blue Arrow Aerospace successfully completed the joint test run of the second-stage engine of the Suzaku 2 rocket. The rocket engine used in this round of test runs is a combination of 80-ton and 10-ton “Tianque” liquid oxygen methane engines….

Recently previously During the Month of May, on the later part of the month of 2021 24th May, it was China’s Space Day also Book Day in the Occasion of People’s Republic of China, During the Occasion celebrating in eighteen cites with LandSpace –Blue Arrow Aerospace in collaboration with CITIC Bookstore, we will jointly create a theme event of “Stars, Book Sea and Unstoppable Exploration” , which will be opened in the airport and city bookstores. A two-week expedition to space travel. We invite you to pay attention to the “growth” of Suzaku Rocket and witness the upward path of space exploration…. In which the event runs through the duration of April 23 to May 5th 2021….

Previously on 30th January 2021  during a rocket engine testing that  lasted for “Five times in eight days, Blue Arrow Aerospace’s 80-ton engine completes 2000 second reliability test run” January 30, 2021, the 12th “Tianque” 80-ton liquid oxygen methane engine completed the long-range reliability test run with a test run time of 400 seconds . The engine has undergone five consecutive long-distance tests on 23-30 days, with a cumulative duration of over 2000 seconds, covering 13 times the flight duration. This round of testing also carried out high and low thrust, high and low mixing ratio, limit inlet pressure and temperature tests, which fully verified the reliability and stability of the engine….