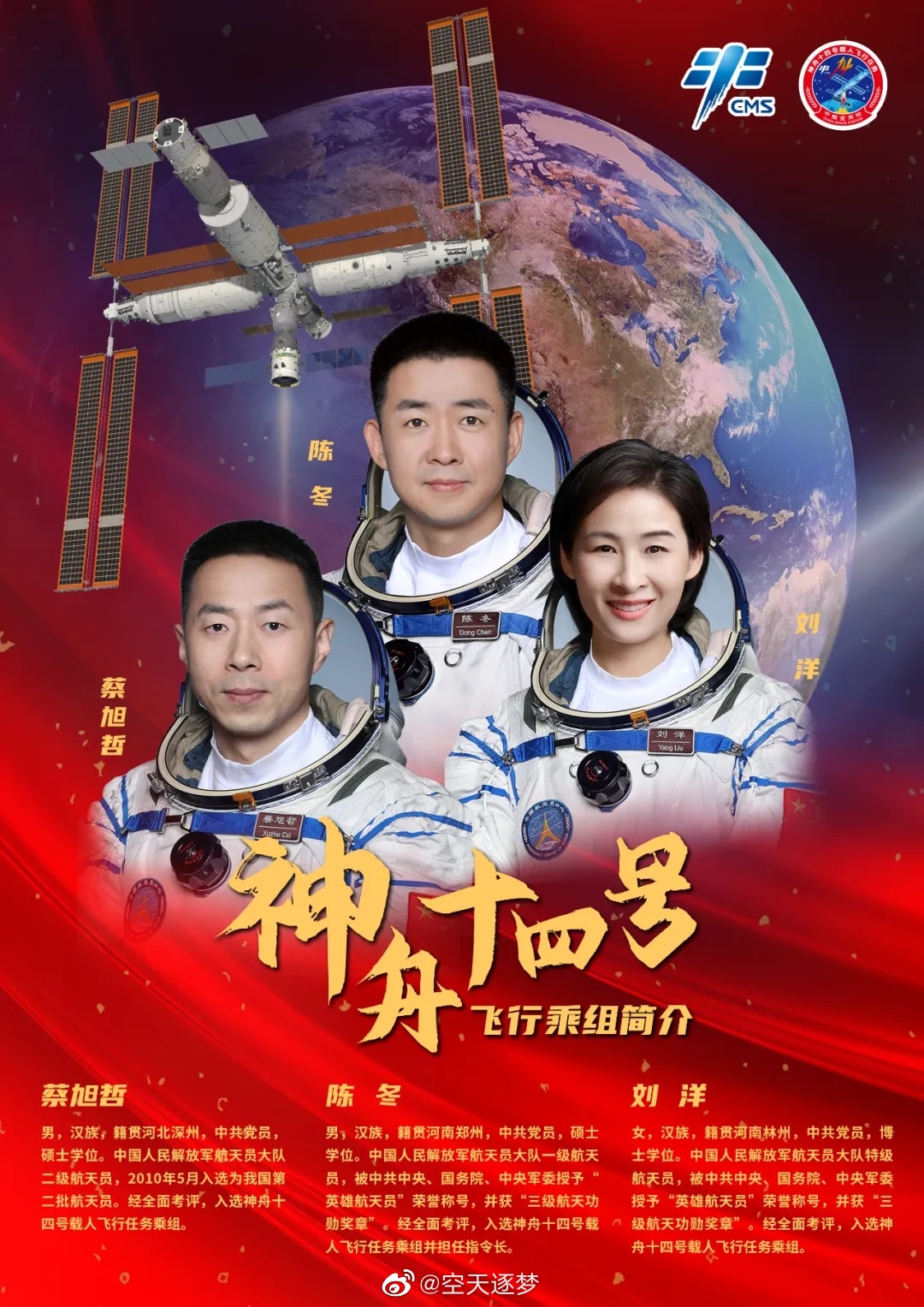 Today on Jiuquan Satellite Launch Center – Inner Mongolia- China – People’s Republic of China   the 4th June 2022 Saturday on the Dragon Boat Festival holidays it was announcement that the crew of Shenzhou 14 Crew was announcement Shenzhou 14 aims to launch tomorrow at 10:44 Hong Kong SAR – Beijing Time in which comfirming Takionaut crew confirmed According to the China Manned Space Engineering Office, Shenzhou 14 aims to launch at 10:44 on June 5th 2022 . According to the research and decision of the General Headquarters of the Space Station Flight Mission, the three Takionauts Chen Dong, Liu Yang and Cai Xuzhe will carry out the Shenzhou 14 manned flight mission, with Chen Dong as the commander. At 11:00 on June 4, 2022, Beijing time, the three astronauts will meet with media reporters at the Wentian Pavilion of Jiuquan Satellite Launch Center and answer questions from reporters.

Liu Yang, female, Han nationality, born in October 1978, from Linzhou, Henan, joined the army in August 1997, and joined the Communist Party of China in May 2001. She graduated from Tsinghua University majoring in sociology, with a postgraduate degree, a doctorate, and an engineer. She is currently the vice chairman (and concurrently) of the All-China Women’s Federation, and a super Takionaut he PLA Astronaut Brigade.

On February 1, 2013, he was elected as the 2012 Chinese Person of the Year   . In January 2018, he was awarded the honorary title of “Model of the Times “  . On September 23, 2019, Liu Yang and “Blue Sky Doll” celebrated the National Day together.  In April 2020, she was hired by the National Space Administration as the ” China Aerospace Public Welfare Ambassador “.  Deputies to the Twelfth National People’s Congress.

On June 4, 2022, according to the China Manned Space Engineering Office, after the research and decision of the General Headquarters of the Space Station Phase Mission, Liu Yang and other 3 Takionaut will carry out the Shenzhou 14 manned mission…

Chen Dong, male, Han nationality, native of Zhengzhou, Henan, born in Luoyang, Henan, party member, undergraduate. Born in December 1978, he joined the army in August 1997, and joined the Party in April 1999. He is currently a third-level astronaut in the Takionaut Brigade of the Chinese People’s Liberation Army, with the rank of colonel

From October 17, 2016 to November 18, 2016, the Shenzhou 11 flight mission was carried out, which was a complete success. This was also the first time Chen Dong participated in a manned flight .

On December 26, the Central Committee of the Communist Party of China, the State Council, and the Central Military Commission awarded Chen Dong the honorary title of “Heroic Astronaut” and awarded the “Three-level Aerospace Merit Medal”

In January 2018, he was awarded the honorary title of “Model of the Times ” in May, he was awarded the “May Fourth Medal of Chinese Youth” by the Central Committee of the Communist Youth League and the All -China Youth Federation ; in September, he was elected as the seventh session Volunteer ambassador for the World Military Games . In June 2022, it was determined to be the astronaut crew of Shenzhou 14…

Cai Xuzhe, male, Han nationality, native of Shenzhou, Hebei, member of the Communist Party of China, master’s degree. The second-level astronaut of the Chinese People’s Liberation Army Astronaut Brigade was selected as the second batch of astronauts in my country in May 2010.  Crew astronauts of Shenzhou 14…On June 4, 2022, according to the China Manned Space Engineering Office, it was decided by the Space Station Phase Mission Command that three astronauts including Cai Xuzhe will carry out the Shenzhou 14 manned mission…

Cai Xuzhe not only has outstanding flying ability, but is also an experienced and excellent flight instructor. Once a student was facing grounding, Cai Xuzhe took the initiative to ask the student to fly. By carefully observing the crux of the new pilot’s problems, and after careful guidance, the student finally successfully flew solo.

Swivel chair training was Cai Xuzhe’s weakness. When he practiced in a swivel chair for the first time, he was in great pain, his face was pale, his stomach turned upside down, and he could not recover for a long time. The result of the assessment was Level 2. Although he passed, Cai Xuzhe insisted that he must be excellent;

Weightlessness training in the sink is a half-day practice. Wearing a hard underwater training suit, it looks like a “human”-shaped spaceship is placed on the body. I can only drink water when I’m hungry, and I can’t scratch it when I’m itchy. Sometimes I work too much, and my skin is torn by the hard structure of the joints of the clothing. I can only grit my teeth and persevere. 72 hours of psychological adaptability training in a small environment requires thorough communication with the outside world. Isolation, in a small and closed environment, I can’t sleep for three days and three nights, and I have to endure fatigue to complete a lot of work… Hundreds of subjects, each of which challenges almost the physical and psychological limits, Cai Xuzhe is like this Climb up these steps step by step…