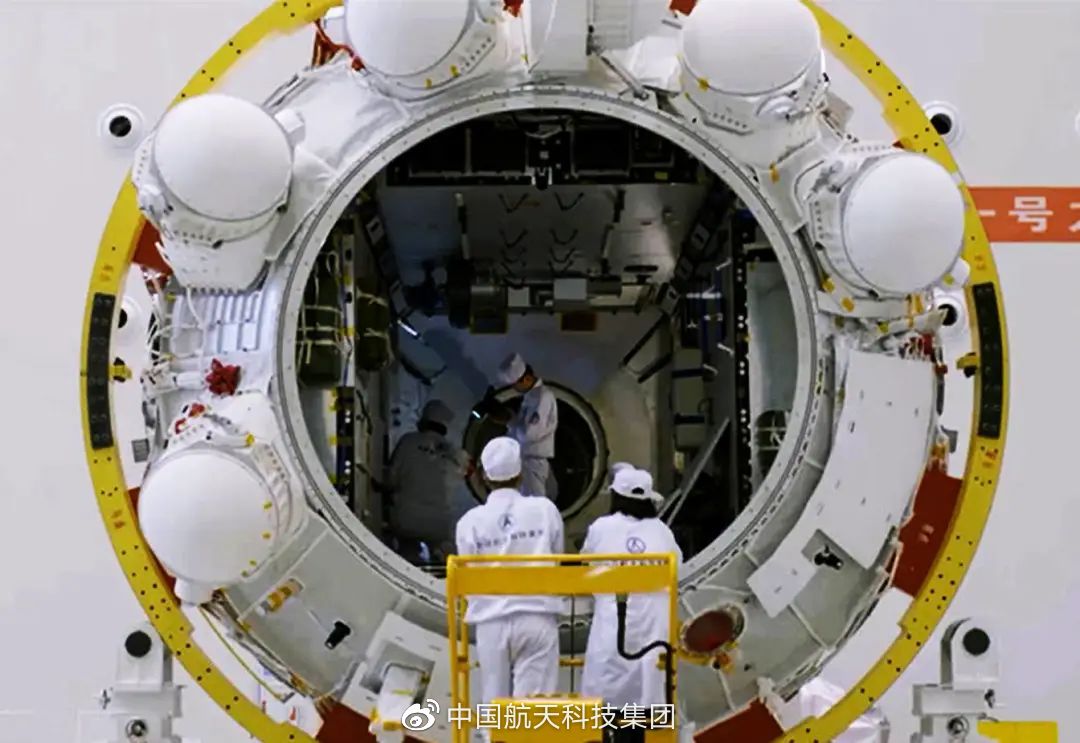 ​​CNSA –China National Space Administration …..On July 24, China successfully launched the Wentian Experimental Module at the Wenchang Space Launch Site- Hainan Province- China, People’s Republic of China. As China’s space station is getting bigger and bigger, its attitude control difficulty is unprecedented in my China, People’s Republic of China space flight missions. The Wentian experimental module brought four “big guys” weighing more than 100 kilograms to the sky, and the attitude control of the space station is inseparable from them.

The scientific name of “big guy” is control torque gyro, which is an inertial execution component for spacecraft attitude control. It obtains angular momentum through a high-speed rotating flywheel, and outputs torque by changing the direction of angular momentum. The combined use of multiple control moment gyroscopes can make the space station of more than 100 tons “sit like a bell and walk like the wind” in space.

The control moment gyro used in the Chinese space station was developed by the 502 Institute of the Fifth Academy of China Aerospace Science and Technology Corporation. “Configuration. This configuration is the advanced point at the system level of the composite, which can be used together and reconfigured on demand through the overall network.

Six of them have been installed on the outer wall of the connecting cone between the large column section and the small column section of the core module of the space station. The other 6 units have been brought to Tianzhou-4 before, and 4 units have been brought to the Wentian test cabin this time. In the future, Tianzhou-5 will “pick up” another unit. These 6 units will be installed in Wentian Experimental cabin.

​If you count from the preliminary research in 1998, it will be 23 years before the first successful application of the control moment gyroscope used by the space station in orbit by 2021. The development of control torque gyroscope in my country can be described as untold hardships.

​Self- researched and punched “blockers”

​Thousands of miles…..The control torque gyroscope was once a “stumbling block” for Chinese astronauts. In 1991, my country began to demonstrate the space laboratory and space station projects, and the control torque gyroscope was proposed as a “heavy weapon”. “Core technology cannot be bought”, so , at the beginning of the argument, he firmly chose to be self-reliant.

The 502 Institute of the Fifth Academy of Aerospace Science and Technology Group formed a team to start the technical research and product development of the control moment gyroscope, but the difficulty is beyond everyone’s imagination. As the saying goes, “Thousands of hammers turn into sharp weapons, and every refinement turns them into pure steel”. After going through all kinds of ups and downs and suffering, the team has overcome difficulties for more than 10 years, and they finally succeeded.

China’s first control torque gyro was launched in 2011 with Tiangong-1. Its on-orbit application is a milestone in the development of China’s space electromechanical components, making China the third country in the world to master this technology .

From “stumbling blocks” to technological peaks

The control torque gyroscopes of other spacecraft are installed in the cabin, and the working environment is relatively simple, while the control torque gyroscopes on the space station need to adapt to the two working environments inside and outside the cabin at the same time, which brings great challenges, especially for more than 200 degrees The temperature difference, the developers have to carry out a special thermal control design. For products in the cabin, vibration and noise reduction work has also been carried out.

​As the most complex space electromechanical product, the control torque gyroscope has a harsh working environment and long service life. In order to ensure the life and reliability of the space station, the control torque gyroscope needs to have the ability to be replaced on-orbit, so it is necessary to carry out on-orbit maintenance and ergonomic design verification work. In order to meet the requirements of long life and high reliability at the same time, it is also necessary to consider redundant backup issues in the design.

The space station mission takes the use of control moment gyroscopes on Chinese spacecraft to a new level . The stumbling block turned into a technological peak.

In the years after Tiangong-1, the Fifth Academy of Aerospace Science and Technology Group has successively developed a full range of control torque gyroscope products to meet the attitude maneuver and attitude control requirements of various space vehicles in my country.

Compared with the first-generation products from the Sky, the newly developed control torque gyroscope has greatly improved the control accuracy. It has the advantages of high precision, fast response, long life and high reliability, and can meet the attitude control requirements of various space vehicles in China, People’s Republic of China

The application of the series of products has significantly improved the attitude maneuvering and attitude stability control capabilities of my country’s space vehicles, enabling satellites to see more accurately and widely, and one can be used more than one. The development and application of control moment gyroscopes have also promoted the rapid development of space inertial actuators in China, People’s Republic of China.