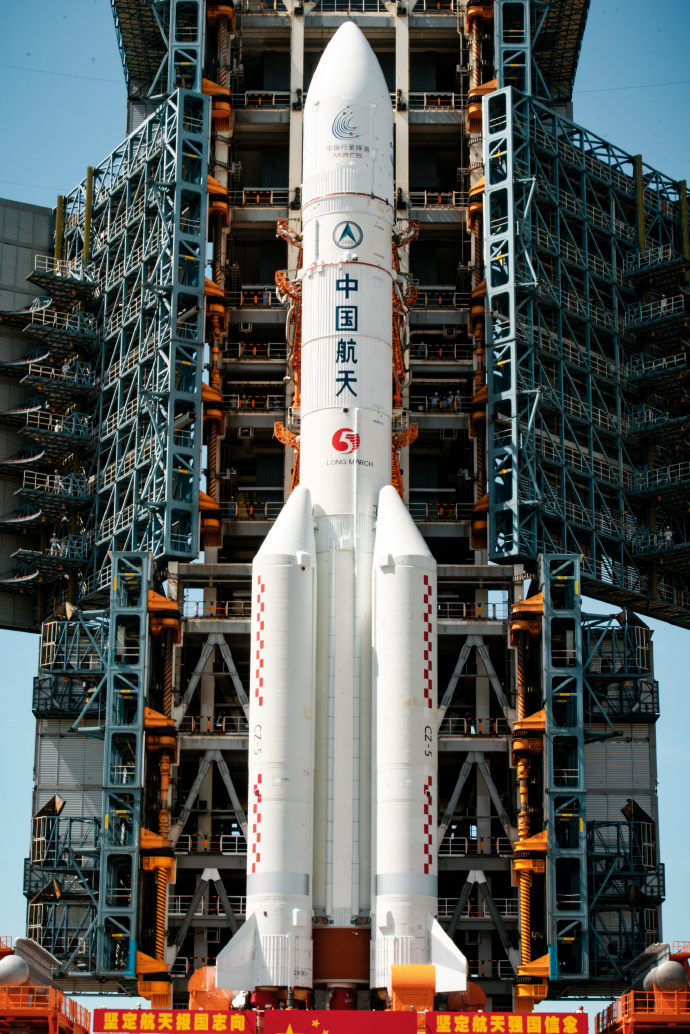 2020 at 23:20 on September 21st day in China – Peoples ’Republic of China CNSA –China National Space Administration, The Belt and Road Imitative ESA –European Space Agency Mars Mission   under the operation, asked the first Mars mission flight control team 1 spacecraft is four 120N engine ignition at the same time for 20 seconds, and the successful completion of the second track midway amended, and The actual performance of the 120N engine was verified on orbit….

Up to now, Tianwen-1 has been in orbit for 60 days, about 19 million kilometres away from the earth, with a flight mileage of about 160 million kilometres. The detector systems are in good condition, and the ground-based measurement and control communication centers and stations track normally. Midway correction refers to the correction of the orbit deviation caused by various reasons during the flight of the probe, so that the probe can fly closer to the theoretical orbit. The accuracy of Tianwen-1’s launch into orbit and the first midway correction is very high, and the amount of correction this time is very small…..

The name “Tianwen”: 天問 ….. comes from the long poem of the same name written by Qu Yuan (about 340–278 BC), one of the greatest poets of Ancient China. It is a poem of a series of questions starting with how the universe was created.

Previously On 17th July 2020 today on a clear summery day at Wenchang Spacecraft Launch Center at Hainan Province- China- People’s Republic of China  one of many CNSA –China National Space Administration .. In which on an early morning day it was the first realize deployment of the Long March 5 Y4- Chang Zheng 5 Y4 among with the Tianwen One Martian Rover and Lander in which is set to launch on 23rd July 2020.. Or within the Late July August Launch Window…  The Belt and Road Initiative Martian program named Tianwen-1″ consists of three parts: an orbiter, a lander, and a patrol device, with a total mass of about 5 tons. The three major tasks of “winding, landing and patrolling” will be completed in one go….

It is the  fourth Long March 5 Yaosi Chang Zheng 5 Yaosi carrier rocket to be used to launch China’s first Mars exploration mission, was vertically transported to the launching area at the Wenchang Space Launch Center in south China’s Hainan Province on Friday. In which previously order to meet the needs of the mission, Xi’an Satellite Measurement and Control Center has recently adapted the ground measurement and control communication system. At present, the renovation work and various targeted tests have been fully completed, and the performance indicators meet the mission needs of “Tianwen No. 1”. When the “Tianwen 1” Mars probe successfully entered the earth fire turn…It’ll enter towards its landing site the Utopia Planitia  of  landing attempt, with each site having a landing ellipse of approximately 100 by 40 kilometres….

The new Chinese Mars spacecraft, consisting of an orbiter and a lander (with an attached rover) is developed by the China Aerospace Science and Technology Corporation (CASC), and managed by the National Space Science Centre (NSSC) in Beijing. The lander portion of the spacecraft will use a parachute, retrorockets, and an airbag in order to achieve landing on the Martian surface. If the landing is successful, the lander would then release a rover. Said rover will be powered by solar panels and is expected to probe the Martian surface with radar and to perform chemical analyses on the soil; it would also look for biomolecules and biosignatures. ….

The aims of the mission may include the following: find evidence for current and past life, produce Martian surface maps, characterize Martian soil composition and water ice distribution, examine the Martian atmosphere, and in particular, its ionosphere, among others. Simulated Martian landings have been performed as part of mission preparations by the Beijing Institute of Space Mechanics and Electricity…..

During this year, it was China Space Day there was many Celebrations across the country, in which of the light of Covid-19 been contained … in which that didn’t deter celebrating country wide celebrating is a while worthy project in which is the first country’s mission to Mars, finally named on 24th April 2020 is Mars exploration mission named Tianwen No. 1 【转转! 火星 我们 来 了 [加油] at present, China CNSA – China National Space Administration among with its sister organisation is carrying out the development of the first Mars exploration project. According to the plan, in 2020, China will launch the Mars Rover through the Long March V, and achieve Mars orbit, landing and patrol detection through one launch. After the probe is launched, it will take about 7 months to reach Mars…..