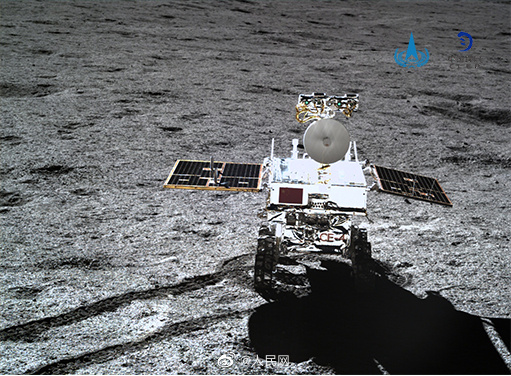 As of Month of 7th July 2022, The CNSA –China National Space Administration CLEP- China Lunar Exploration Program  Belt and Road Initiative Lunar Mission……Chang’e-4 with Yutu two the Lunar rover still working exploring more than moved more than 1239.88  meters on the other side of the moon on the 103 Kilometers Diameter Von Karman Crater in which is least than two length by length fifty five Kilometers Hong Kong –Macau- Zhuhai Bridges …. Working Exploring the Crater on the other side of the Moon Chang’e Luna…. Chang’e-4 completed the 44th day of work, and the results revealed the cause of the abnormal area of ​​​​the Moon’s South Pole-Aiken ….composition travelling The “Yutu 2” lunar rover and lander of the Chang’e The total mileage of the lunar rover on the far side of the moon is 1239.88 meters

As of Today is the first day of the year of the Rabbit on the 22nd January 2022 in which celebrating the hard working on the Von Karman Crater adventuring in celebrating the  jade rabbit on the moon Yutu2 has sent some photos to us as a new year gift….. The Yutu-2 lunar rover and the lander of Change4 probe woke up respectively on January 15th and 16th 2023. They started their 51st lunar day work period…… In which So far, Yutu-2 has been working for over 4 years. It has travelled nearly 1.5 kilometers and released more than 940.1GB scientific data of scientific data at all levels.

Blessings for the Year of the Rabbit! This year is the traditional Chinese Year of the Rabbit. In the hearts of Chinese people, the most famous rabbit must be the “Jade Rabbit” from ancient Chinese myths. . China Aerospace has such a “Jade Rabbit”, which also lives on the moon. It is the “Yutu-2” lunar rover in my country’s lunar exploration project. On the occasion of the Chinese New Year in the Year of the Rabbit, it sent back the latest photographs from the moon 380,000 kilometers away, sending a New Year blessing.