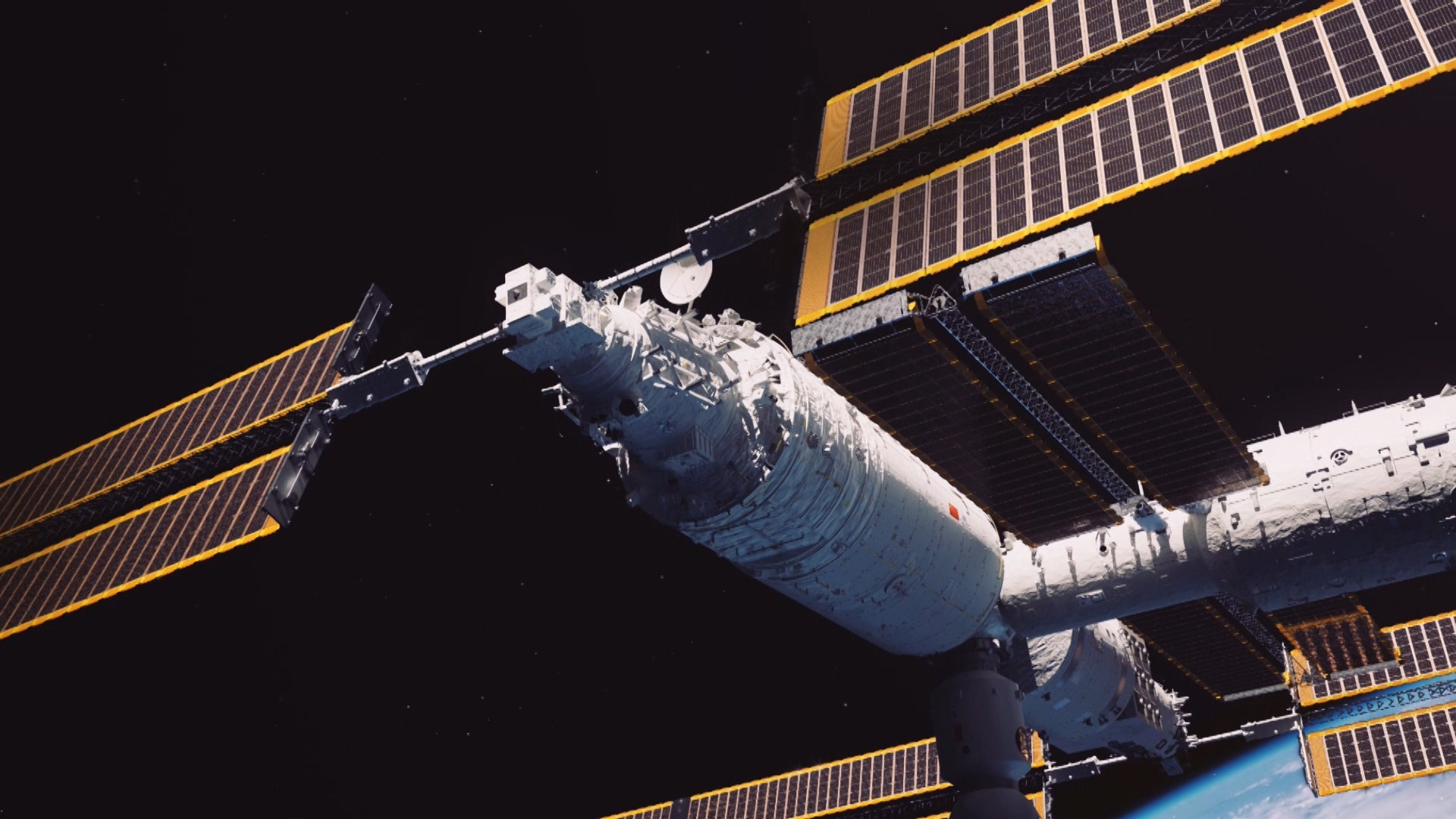 On October 31, when the whole country was studying, propagating and implementing the spirit of the 20th National Congress of the Communist Party of China, the Mengtian experimental module of the Chinese space station was successfully launched by the Long March 5B carrier rocket. With the successful docking and repositioning of “Mengtian”, the basic configuration of the “T” character of the Chinese space station has been assembled in orbit! During the launch mission, a series of high-tech aerospace technology helped “Mengtian” realize its dream. We set up a column of “”Mengtian” black technology” to interpret some representative technologies and products, and to demonstrate the innovative achievements of aerospace science and technology for high-level self-reliance and creating a better life.

​If
the airlock of the Wentian experimental module is compared to an “international airport”, then the cargo airlock configured on the Mengtian experimental module is the “international cargo port” of the space station. Through this “port”, a series of new technologies such as the automatic loading and unloading technology of China’s space station and the in-orbit release of small satellites will be unveiled for the first time, realizing the fully automatic interaction of cargo and payloads inside and outside the space station cabin, not only sending out, but also receiving them. , but also shipped fast and stable .

​The most powerful “logistics guarantee”

​In the past With the completion of the national space laboratory, the space station has entered the stage of normal operation, and large-scale scientific research will be carried out. How to conduct extravehicular scientific experiments more efficiently and safely, and further improve the scientific application capabilities of China’s space station , has become an urgent need solved problem.

To this end, the designers proposed the concept of automatic cargo entry and exit— a load transfer mechanism dedicated to loads and cargoes was installed in the Mengtian experimental cabin, which is responsible for transferring cargo into and out of the cabin . Mengtian’s airlock has two doors, one is the inner door connecting the working cabin, and the other is the outer door connecting the outer space. Inside the 2 doors, a load transfer mechanism is installed.

Subsequently, the transfer mechanism will be smoothly retracted from the working cabin to the airlock. After the astronauts close the inner hatch, they can see the working conditions of the load transfer mechanism through the porthole on the hatch. Everything is ready, the outer electric hatch of the airlock will be opened, the load transfer mechanism will transfer the scientific experiment load to the hatch, and the mechanical arm outside the cabin will grab the load and install it outside the cabin. The whole action will be completed in one go. In order to ensure the air pressure, temperature and other environment in the cabin, the doors on both sides cannot be opened at the same time, and there is no need to worry about accidental touches, because the outer door will only be opened when all conditions are met and the ground command is received.

It is understood that the delivery capacity of the load transfer mechanism can reach 400 kilograms, and the envelope of a single delivery can reach 1.15 meters x 1.2 meters x 0.9 meters . In order to meet the enveloping requirements for incoming and outgoing cargo, the outer door of the cargo airlock is as wide as 1.2 meters . This is also the first time that the square hatch has appeared on China’s space station. The hatch adopts a fully automatic sliding design, and the switch is controlled by sending commands from the ground. It is the key equipment for isolating the space environment inside and outside the cabin.

​In order to provide a comfortable experience for scientific experiment loads to go out of the cabin, the load transfer mechanism must not only run stably, go far, and stop accurately, but also realize the unique configuration and layout of China’s space station by turning from 0° to 90° The lower load enters and exits the cabin function , so that it can not only lead to the working cabin, but also extend out of the airlock cabin.

Stable running , the load transfer mechanism has variable speed start-stop control capabilities, so that the scientific experiment load can achieve a smooth transition during the riding process, whether it is linear motion or rotary motion, and will not be frustrated by sudden braking. , Cargo brings a safe and comfortable ride experience.

Going far , in order to facilitate the astronauts to install and disassemble the cargo in the working cabin, the load transfer mechanism adopts a special transmission mechanism combination design to achieve large-stroke movement. A series of operations for loading out of the cabin can be completed.

Stop accurately , and when it reaches the hatch, the load transfer mechanism can stop immediately and precisely lock the position and attitude. At this time, the mechanical arm outside the cabin will escort the scientific experiment load to the outside of the cabin for scientific exploration.

​The most cutting-edge “space station”

Let small satellites explore the great mysteries of the universe

In addition to realizing the function of automatic entry and exit of loads and cargo, the load transfer mechanism also provides “VIP boxes” for cube satellites and micro-satellites to realize “space tourism” , which is the tiny aircraft release mechanism configured in the Mengtian experimental cabin . With this China’s space station can be transformed into a “space station” to provide the most cutting-edge starting point for the release of cubesats and microsatellites.

Normally, the release mechanism is stored in the cabin in the form of components. When it is necessary to perform the task of releasing a small satellite, astronauts can assemble it on-orbit according to the specifications of the cubesat. The single maximum passenger capacity of a “box” is 36U CubeSat or 100kg-class microsatellite (CubeSat uses U as the basic unit, and the volume of 1U is 10 cm x 10 cm x 10 cm) .