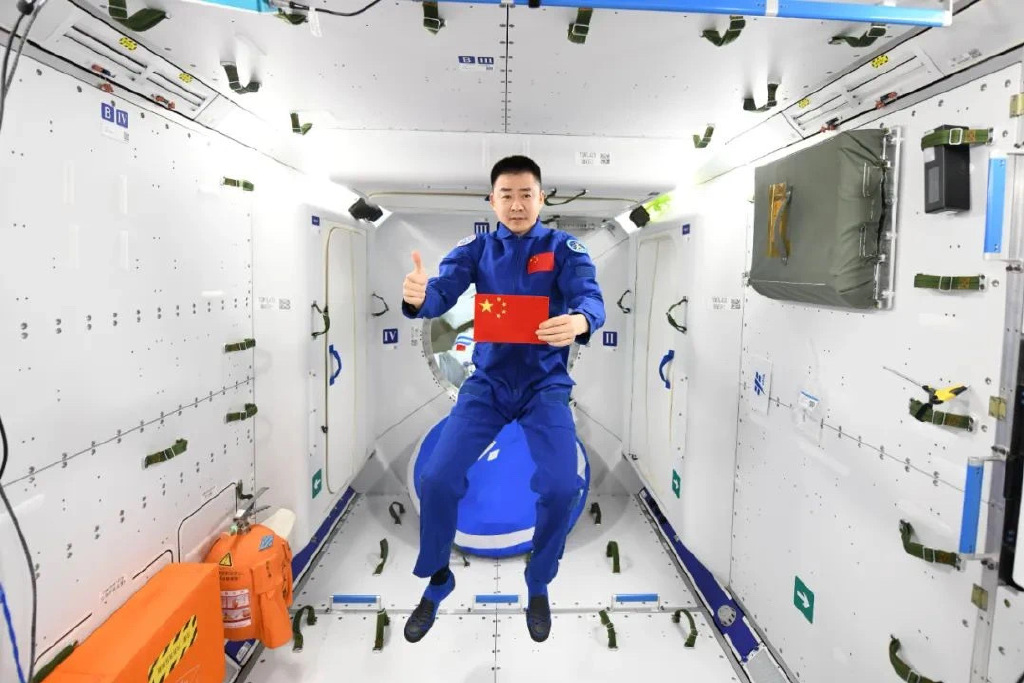 Great Earth perspective to see the crew of the Shenzhou 14 Takionauts successfully completed the third out-of-vehicle mission. After three space walks, the astronauts completed all tasks as planned. The combination of the Chinese space station in the shape of a “T” and the blue earth are in the same frame. This incomparable beauty is also shared with you!

天宫教育小丽蛋On the week of 22nd November 2022 CNSA – CMS Shenzhou 15 Takionaut陈冬 Chen Dong who has been in orbit for 200 days, Today, CNSA CMS Shenzhou 14 Chen Dong became the first Chinese Takionaut whose orbit time exceeded 200 days. During these 200 days, he not only completed three out-of-vehicular missions, but also brought us the wonderful “Tiangong Classroom” as a space teacher. When the “Tiangong Classroom” was held last time, Mr. Chen Dong showed everyone how the rotating wrench periodically turned around in a microgravity environment, and left an after-school exercise for everyone-the three-axis object in microgravity How does the environment rotate? Today, Mr. Chen Dong will give you an answer and demonstrate this miraculous physical phenomenon……

Chen Dong, male, Han nationality, native of Zhengzhou, Henan, born in Luoyang, Henan, member of the Communist Party of China, master’s degree. Born in December 1978, joined the army in August 1997, joined the Communist Party of China in April 1999, and graduated with a master ‘s degree from the School of Management of Xi’an Jiaotong University in 2017. He is now a first- class astronaut in the Astronaut Brigade of the Chinese People’s Liberation Army , with the rank of colonel

From October 17, 2016 to November 18, 2016, the flight mission of Shenzhou 11 was carried out , and it was a complete success. This was Chen Dong’s first manned flight. On December 26, the Central Committee of the Communist Party of China, the State Council, and the Central Military Commission awarded Chen Dong the honorary title of “Heroic Astronaut” and awarded him the “Three-Class Aerospace Meritorious Medal” .

In June 2022, it was determined to be the astronaut crew of Shenzhou 14; on June 4, according to the China Manned Space Engineering Office, it was decided by the General Command of the Space Station Phase Mission, Chen Dong et al. Three astronauts will carry out the manned mission of Shenzhou 14, with Chen Dong as the commander; on November 22, Chen Dong set a record and became the first Chinese Takionaut to stay in orbit for more than 200 days….