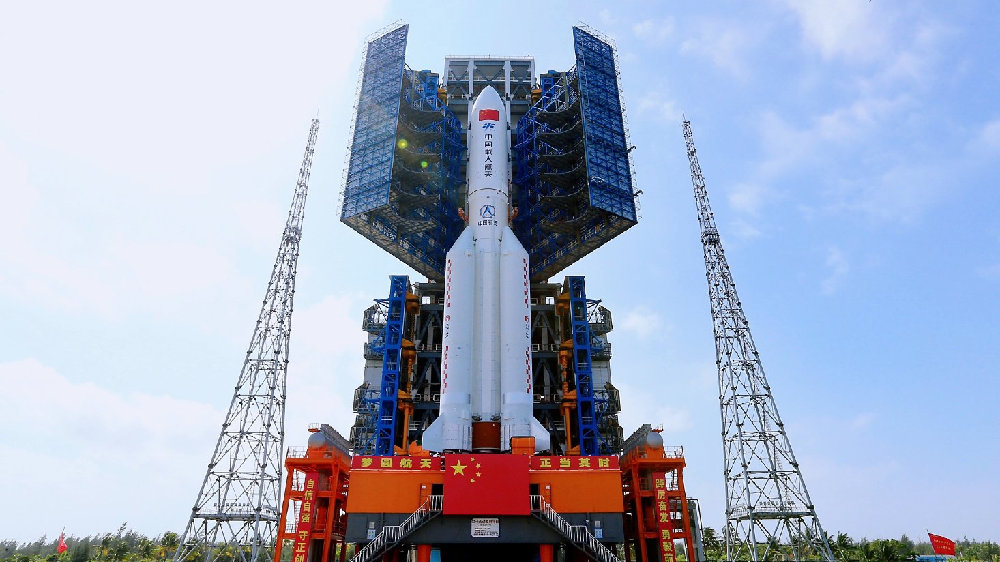 On October 25, 2022, the Chang Zheng Long March 5B Yao-4 carrier rocket carrying the Mengtian experimental module of the space station was stably transferred to the launch area. Two years ago, the “Chang 5 B” stunned the sky with its perfect first flight, ushered in a “good start” for the implementation of the “third step” development strategic mission of the manned space project, and opened the prelude to the space station phase of the mission, and then sent ” “Tianhe” and “Ask Tian” successfully entered the orbit. As for how to become the backbone of the space station construction, “Chang Zheng 5 B” has given the best answer…

After ten years of grinding an “arrow”, it took off all over the world

It takes ten years to grind an “arrow”, and it is heard all over the world. As a new type of carrier rocket specially developed for the construction of manned space engineering space station, the carrying capacity of “Chang 5 B” is the largest among rockets currently in service in my country, with a carrying capacity of 25 tons in low-Earth orbit. The space station module of more than 20 tons was launched into orbit. The successful maiden flight of the “Chang 5 B” marks that my country’s launch vehicle’s low-Earth orbit carrying capacity ranks among the top in the world, laying a solid foundation for the smooth implementation of the follow-up tasks of my country’s space station project.

The Long March 5B carrier rocket has carried out a number of technological breakthroughs and innovations, and a number of pioneering “black technologies” have created “exclusive vehicles” for the space station cabin.

The Long March 5B launch vehicle has the longest and largest fairing in my country at present, with a length of 20.5 meters, a diameter of 5.2 meters, and a volume of more than 345 cubic meters. Such a spacious space is also tailored for the launch of the space station module. In addition, in order to improve the aerodynamic characteristics, the rocket fairing adopts a streamlined Von Karman curve shape, which can better reduce air resistance and reduce the impact of load; at the same time, a rotary separation scheme is adopted for the separation of the fairing to ensure that the super-large fairing is safe and reliable. separation.

02 “Zero window” launch, every minute and second is accurate

03 The large-diameter cabin arrows are separated, and the “softness” is used to overcome the rigidity

The diameter of the connection interface between the space station cabin and the Long March 5B carrier rocket exceeds 4 meters. The separation of the cabin and the arrow needs to consider factors such as reliability and impact environment. Adverse effects such as shock to the environment are minimized. Therefore, the rocket adopts the shock reduction scheme of “double isolation frame + damping box”, and applies “particle damping technology”. “Particle damping technology” is a new type of passive vibration control technology. It forms a coupled, closed nonlinear system through particles and dampers. It rapidly dissipates kinetic energy by means of friction and inelastic collisions to achieve the effect of vibration reduction and noise reduction. , so that the space station cabin can feel the “tenderness” of the rocket during the “getting off” process.

04 Directly into orbit with high thrust, in one step

The Long March 5B carrier rocket adopts a one-stage and a half configuration, consisting of a core-stage + booster + canopy combination, so there is no separate attitude adjustment and terminal speed correction system, but the first-stage rocket is used to directly transfer the payload. into the predetermined orbit. When the first-stage engine is shut down, the thrust of about 140 tons disappears within a few seconds, which is equivalent to a sudden “brake” of a high-speed train, and it needs to stop firmly at the designated position. By adopting the attitude control gain optimization and compound guidance method, the developers improved the rocket attitude control accuracy, reduced the influence of guidance error on the accuracy, and made the rocket in the best “attitude” and the most accurate position when separating. At the same time, two reverse thrust rockets have been added, so that the first-stage arrow body of the rocket can avoid the orbital surface of the space station cabin in time, which improves the safety margin of the separation of the cabin and the arrow.

The Long March 5B carrier rocket is not only safe, reliable and capable, but also can customize different “cabins” for different “passengers”. This customized design allows the rocket to better adapt to the spacecraft, so that the spacecraft can operate in Install more loads in limited space to achieve maximum capacity. The Long March 5B Yao-4 carrier rocket launched this time has been customized according to the shape and weight of the Mengtian experimental cabin. In order to meet the working requirements of the Mengtian capsule and the rocket in the launch area, the opening of the operation port is specially designed on the rocket fairing; in order to meet the needs of wireless communication in the ascending section of the Mengtian experimental module, the rocket fairing is also specially designed. The corresponding wave-transmitting port of the fairing was designed; in terms of orbit, the orbit design and the detailed evaluation of the orbit entry accuracy were also carried out to meet the requirements of the Mengtian experimental cabin.

Understanding a set of numbers # Mengtian Experiment Module# ] What are the characteristics of the Mengtian Experiment Module, one of the three modules that make up the basic configuration of the Chinese space station? What tasks will be undertaken in the future? Questions about the Mengtian experimental cabin, the official answer for you! With the launch of the Mengtian experimental module into orbit, the rendezvous and docking with the Tianhe core module and the completion of the transposition, the Chinese space station will form a three-cabin “T” basic configuration. The journey is long and courageous, and the dream comes true. The next stop, Tiangong Space Station, let us look forward to it together…