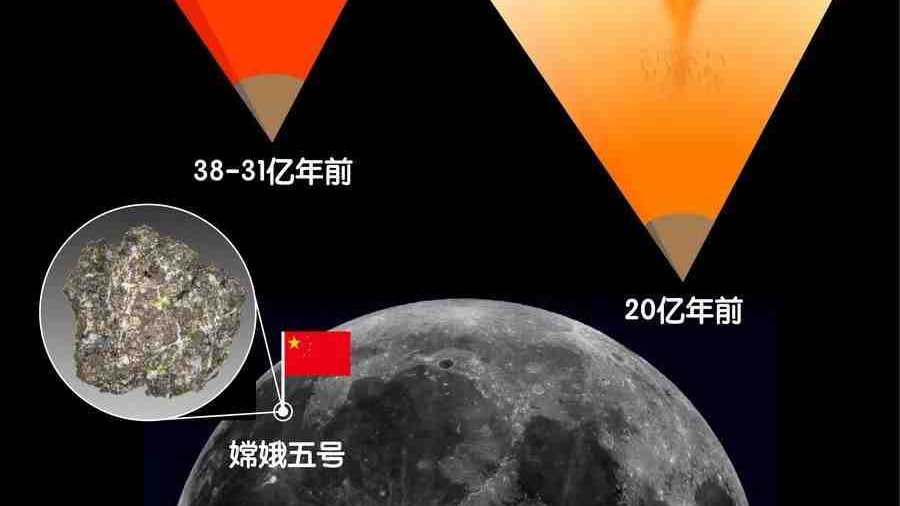 On the week of 17th October 2022, The Returning lunar soil samples Chang’e 5 Mons Rumker lunar soil reveals a great mystery!…… Why the moon still has volcanic activity 2 billion years ago Chang’e 5 lunar soil, revealing a big mystery!  Chinese scientists have proposed a new model of lunar thermal evolution based on the study of the Chang’e-5 lunar soil, revealing a mystery that has plagued the academic world: why the moon still had volcanic activity 2 billion years ago.

Chinese scientists have proposed a new model of lunar thermal evolution based on the study of the Chang’e 5 lunar soil, revealing a mystery that has plagued academia: why the moon still had volcanic activity 2 billion years ago.

According to Chen Yi, a researcher at the Institute of Geology and Geophysics of the Chinese Academy of Sciences, the moon was formed about 4.5 billion years ago, and its mass is only about 1% of that of the earth. For such a small celestial body, in theory, it should cool rapidly and stop volcanoes very early. Activity and become a “dead” planet.
The return of Chang’e-5 lunar soil samples has triggered a new round of lunar research upsurge. In October 2021, Chinese scientists published three articles in the journal “Nature”, revealing that lunar volcanic activity could last until 2 billion years ago, refreshing human understanding of the history of lunar magma activity and thermal evolution.
According to experts, lunar basalt is a rock formed by the partial melting of the lunar mantle (equivalent to the earth’s mantle) through volcanic eruptions to the lunar surface to cool and crystallize. International scholars have put forward two hypotheses about the partial melting of the continuously cooling lunar mantle: one is that the heat generated by radioactive elements causes the lunar mantle to heat up; the other hypothesis is that if the water content is high, the melting point of the lunar mantle will be lowered.
However, Chinese scientists’ research on the Chang’e-5 basalt revealed that the lunar mantle source region is not rich in radioactive heat-generating elements and is very “dry”, ruling out the above two hypotheses. Therefore, why the lunar volcanism has continued for so long has become an unsolved mystery in a new round of lunar research.

In response to this problem, Chen Yi led the scientific research team to select 27 representative Chang’e 5 basalt cuttings, and used the newly developed scanning electron microscope energy spectrum quantitative scanning technology to analyze the main components of the whole rock cuttings, combined with a series of The petrological and thermodynamic simulation calculations have successfully recovered the initial magma composition of the Chang’e-5 basalt, and compared it with the initial magma of the Apollo samples to deduce their origin depth and temperature.
The study found that the initial magma of the young Chang’e-5 basalt contained more calcium and titanium than the Apollo samples, suggesting that the mantle source region of the Chang’e-5 basalt had more additions of calcium-rich and titanium-rich materials. This part of the material is precisely the product of the late crystallization of the lunar magma ocean, and has the characteristics of being fusible. Its addition will significantly reduce the melting point of the lunar mantle and induce partial melting of the lunar mantle to form young lunar basalts. Further simulation results show that the moon’s interior has experienced continuous cooling for more than a billion years, and the temperature has only dropped by about 80 degrees Celsius.

Chen Yi said that this study shows that although the interior of the moon continues to cool slowly, the fusible components crystallized in the late lunar magma ocean are continuously added to the deep lunar mantle, which not only “supplements calcium and titanium” for the lunar mantle, but also lowers the lunar mantle. the melting point, thereby overcoming the slow cooling lunar interior environment and triggering long-lasting lunar volcanism.

The results were published in the latest issue of the American journal Science Advances.