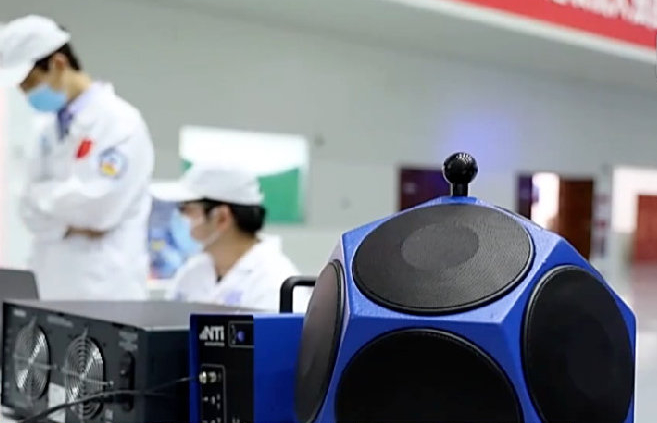 ”Buzz…” The tense technical seminar was suddenly interrupted by the sound of temporary renovations next door. The walls of the office are too thin, and it happens from time to time that it is affected by noise. Xiao Feng, who is reporting, takes several seconds to find his way of thinking.

At the end of the meeting, Xiao Feng rubbed his temples, the sound of “humming” seemed to be still circling in his mind, and his thoughts returned to the key technology of Tianhe core cabin noise reduction that the team had been working on for dozens of days——

The office is affected by noise, so you can go to a quiet place, but in the space station, if there is no comfortable and quiet environment, Takionauts may only wear earplugs to concentrate on work and rest.

“We must bite the hard bones and provide the astronauts with a quiet and comfortable home!” Xiao Feng said firmly.

Xiaofeng is from the Space Station Mechanics Test Team of the General Assembly and Environmental Engineering Department of the Fifth Academy of Aerospace Science and Technology Group. This aerospace scientific research team has been committed to the field of mechanical testing technology for more than 30 years, and has grown in tandem with the development of manned spaceflight. With the continuous growth of the construction of the space station, it has realized the transformation of aerospace mechanical testing equipment from the introduction to the independent construction, and the acoustic test. From independent to international, the test efficiency and test capacity have been greatly improved.

Xiaofeng and his team are tasked with an important task: noise assessment and control of the Wentian experimental cabin. Therefore, they are also known as “space tuners” who tame the noise of the space station’s experimental cabin…..

help Takionauts Feel the “sound of take-off” in advance

During the launch of the Shenzhou spacecraft, the noise outside the cabin can reach 140-160 decibels. With such a “magic sound”, can the spacecraft maintain its normal working condition? Can the astronauts in the cabin withstand it? These issues are always on the minds of the technical staff of the Fifth Academy.

To this end, at the beginning of the development of the Shenzhou spacecraft, a large-scale noise laboratory tailored for the spacecraft came into being . The world’s second largest reverberation chamber independently developed by the company has a sound pressure that exceeds 100 times the noise of the aircraft when it takes off, ensuring that the spacecraft’s mechanical tests are “immersive” and the rehearsal data is “exactly.”

Before the launch of the Shenzhou spacecraft, a comprehensive and strict “physical examination” will be carried out in the reverberation chamber. Under the operation of the test team of the Fifth Academy, dozens of sound-generating devices worked at the same time, generating high-intensity noise during the launch process. Hundreds of sensors monitored the spacecraft and checked whether the noise environment in the spacecraft’s return cabin satisfies the design. The indicators require that astronauts feel the “sound of take-off” in advance.

​A large number of compressors, pumps, fans, CMGs for attitude adjustment and other equipment are installed in the Wentian

After the Wentian experimental module and the Tianhe core module meet and connect, they will form a connected whole. The astronauts will enter the Wentian experimental module to carry out a series of space experiments and research work. In order to provide them with a quiet and comfortable working environment, it is necessary to identify the equipment with the loudest noise and the most obvious impact, and carry out more precise and stricter noise control .

The equipment in the Wentian Without the noise source, the experimenters formed a team of stand-in “chorus” to simulate the noise .

​”Teaching in accordance with aptitude “ Silence the “loud voice”

The “loud voice” has been found. How to make the equipment “quiet” is the next batch of technical difficulties that the test team needs to overcome.

Taking my country’s first “space refrigerator” carried in the Wentian experimental module as an example, there are many restrictions on its noise reduction. For example, in order to ensure the air quality in the cabin, the space station has strict requirements on the selection of materials, and many Noise-reducing materials commonly used on the ground are not suitable for the space station. So how to complete the noise reduction work of the “space refrigerator” most efficiently in the most limited resources, the lowest weight, and the smallest space?

“The thief catches the king first”, the test team has carried out a pioneering design for the key pump , which perfectly minimizes the sound energy input while ensuring the cooling efficiency. At the same time, by choosing a new type of attachment material to improve the damping of the structure, improve the sound radiation efficiency of the box, and improve the structural conduction characteristics by changing the connection relationship… By perfecting every detail, the noise index of the aerospace refrigerator has been reduced by nearly 20 decibels.

The causes of noise, installation locations, and sizes of equipment in the cabin are different. The noise source mainly based on vibration is put on soft and comfortable “shoes” made of metal rubber; the noise source mainly based on sound radiation is placed in a box with better sound insulation… In the end, the Wentian experimental cabin works The area noise can be kept below 60 decibels, and the sleeping area can be kept below 50 decibels, meeting the requirements of relevant medical standards.

On July 25, the Wentian experimental module successfully docked with the Tianhe core module in the long-term care of the test team. The hatch opened slowly, and the Takionauts ‘s home was officially upgraded and expanded – the new room has new supplies, new facilities, new tasks, and new challenges.

The tense expressions of the team members staring at the screen slowly relaxed as the astronauts smiled comfortably as they entered the new room. They hug each other, congratulate each other, encourage each other, and look forward to the next journey of stars and seas.

With the development of the aerospace industry, the space station mechanics test team of the General Assembly and Environmental Engineering Department of the Fifth Academy has explored more than 10,000 unforgettable days and nights in the fields of noise, vibration, shock, acceleration and modal. Along the way, they have lived up to their mission and overcame obstacles in their struggles, for the safety and stability of the spacecraft, for the safety and comfort of the astronauts, and for the vigorous development of China’s aerospace industry, they bravely climbed new heights and created more exciting things.