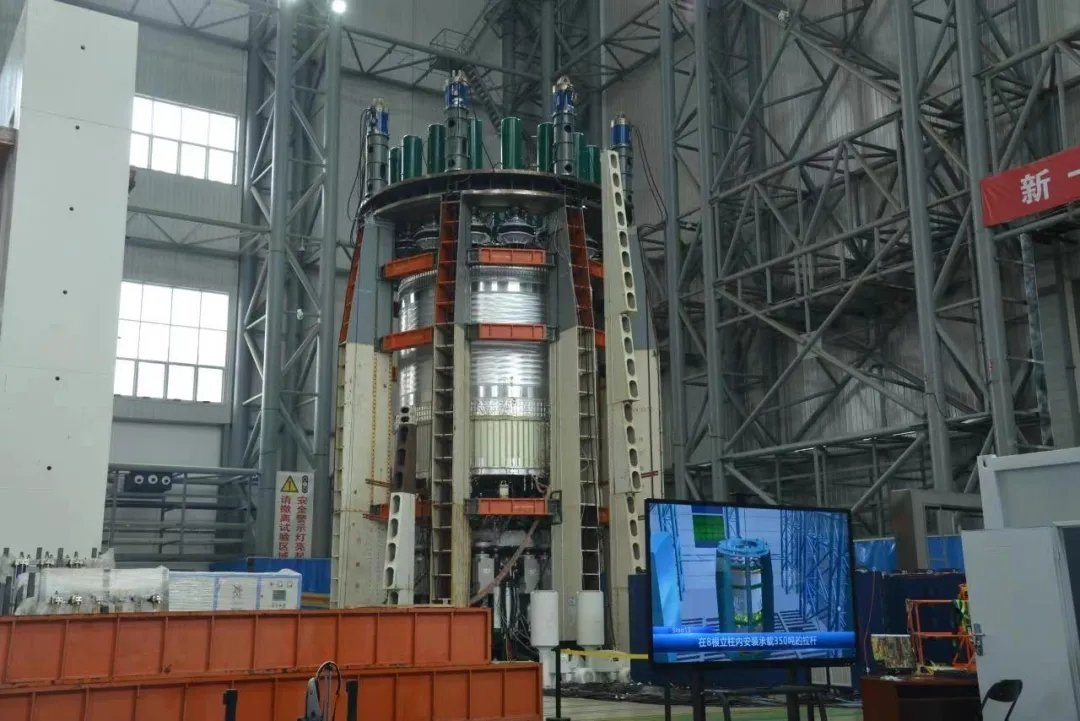 中国空间站 On currently on 29th July 2022 2022, the Belt and Road Initiative CNSA –China National Space Administration   on the currently developments of the  latest progress of China’s Chang Zheng – LongMarch manned lunar landing carrier  rockets Science and Technology Daily reporters learned from the First Academy of China Aerospace Science and Technology Corporation on July 28 2022 that the 702 Institute of the Academy recently successfully completed the multi-machine parallel static-motion joint test of my country’s new generation of manned launch vehicles. It strongly supported the smooth transition of the development of this type of rocket to the initial stage.

The key point is in picture 1 also pictured on the header. The pull rods carrying 350 tons and the thrust of 2800 tons are installed in the 8 columns. Obviously, this test is the core stage (refer to Figure 2), and the thrust of the entire rocket (including the two boosters) is to transmit from this.

This is the new ultra heavy large Chang Zheng –Long March domestically made Carrier rocket that I am most looking forward to, and it is the key model for realizing the dream of manned lunar moon landing…..

This test is an important test to verify the key technologies of multi-machine parallel connection and bottom-box force transmission of a new generation of manned launch vehicles. Wang Xiaohui, director of the 702 Institute, said that the successful completion of the test marks the first time that my country has broken through the large-load static-dynamic joint test technology. It is an important innovation in test methods and test capabilities. Solid foundation.

“This is the largest, most technically difficult, and most complicated test ever conducted in the field of mechanical testing in my country.” Zhu Xiquan, deputy chief designer of the 702 Institute, introduced that the test needs to break through the static thrust of multiple engines under actual flight conditions Combined loading with vibration load involves key test technologies such as vibration elastic boundary simulation, nearly 1,000-ton static load elastic loading, and multi-machine combined multi-dimensional vibration control and loading under large static load.

The new-generation manned launch vehicle base stage module has a diameter of 5 meters and is equipped with multiple 120-ton engines. Zhu Xiquan said that the high-thrust engine multi-machine parallel technology is the first time that my country’s launch vehicle has adopted it, which brings about the coupling effect of static and dynamic forces of complex structures and the nonlinear transmission problem under the action of combined loads. One of the key technologies to deepen research. In order to analyze and solve this problem and verify the effectiveness of the design scheme, the technical team designed and implemented the first multi-machine parallel static and dynamic joint test in my country.

Since 2019, the 702 Institute has demonstrated and determined the experimental technical plan with relevant units. According to the plan, the team successively broke through the key technologies required for the test, and this year developed a static and dynamic load consisting of 28 sets of 50-ton oil and gas support systems, multiple sets of 20-ton induction shaking tables and a set of 1,000-ton vibration elastic boundary systems. Combined loading test system…