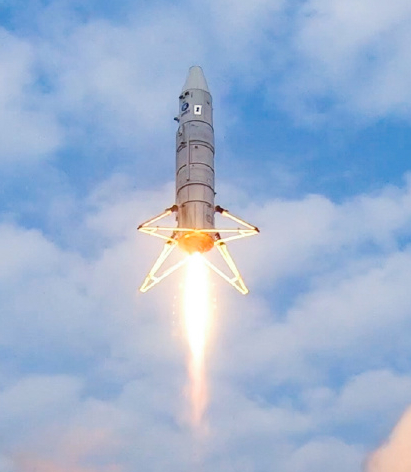 深蓝航天  Deep Blue Limited – Deep Blue Aerospace One of sixty Chinese private space Carrier Rocket Companies in China-People’s Republic of China…  As many of sixty plus Private Rocket Deep Blue Aerospace Co., Ltd. was established in 2017. The company is mainly a high-tech aerospace enterprise that focuses on the direction of liquid recovery and reusable launch vehicles and provides users with commercial launch services. Deep Blue Aerospace Co., Ltd. is headquartered in Nantong City, Jiangsu Province. At the same time, the company has rocket general and liquid engine R&D centers in Yizhuang, Beijing and Xi’an, Shaanxi, respectively, and a rocket power system test base in Tongchuan, Shaanxi…..

The Thunder-R1 engine is the latest reusable liquid oxygen kerosene rocket engine developed by Deep Blue Aerospace. It will be used in the first sub-stage of Deep Blue Aerospace’s first orbit-level recoverable launch vehicle “Nebulas 1” in a parallel manner. It will carry out technical iterations and upgrades in the future to rapidly improve the thrust performance of the engine to the order of 35-40 tons.

The “Nebula 1” carrier rocket has a take-off thrust of more than 130 tons, a low-Earth orbit carrying capacity of about 2 tons, and has a design goal of 50 reuses in the long run. It is planned to have the ability to launch into orbit by the end of 2023

On May 6, 2022, the “Nebula-M” test rocket independently developed by DeepBlue Aerospace completed a 1-kilometer vertical take-off and landing flight test. It has climbed to a new height and is a solid step closer to the successful realization of orbit and recovery

On 9th July 2022 Recently, Deep Blue Aerospace’s 20-ton “Thunder-R1” reusable engine (Thunder Reusable 1) successfully completed the first round of ignition test. The same engine was used in this test, and a total of 5 ignition tests were carried out. The cumulative ignition working time reached 138 seconds, and the longest single working time reached 90 seconds; the engine worked smoothly, and the startup and shutdown were normal in each test run. It marks the complete success of the first-round test run of the Thunder-R1 engine……

Deep Blue Aerospace’s third-hand “Nebula-M” rocket completes the flight recovery mission
​On May 6, 2022, the “Nebula-M” No. 1 test rocket independently developed by DeepBlue Aerospace completed a 1-kilometer vertical take-off and landing (VTVL) flight test, and the rocket moved laterally during the process of climbing and falling. , and finally landed to a point less than 0.5 meters from the “bull’s eye” position of the landing site, and the “Nebula-M” test arrow was successfully recovered.