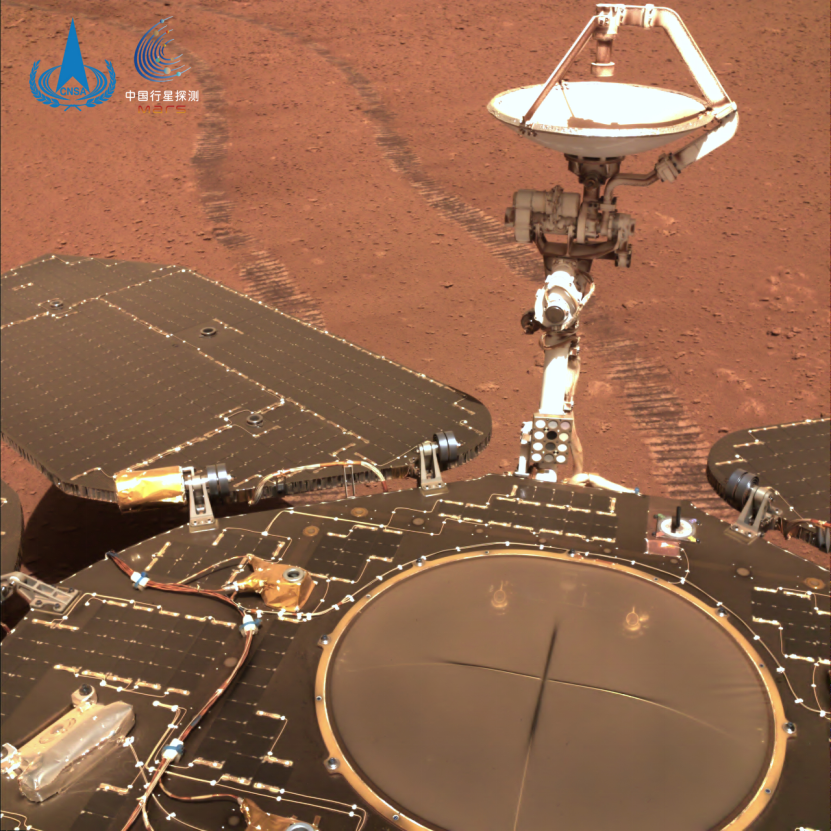 On the months week of  20th  May 2022   天问一号飞運騎遊達达3亿CNSA – China National Space Administration – ESA – European Space agency Belt and road initiative mars mission…first Mars exploration mission, Tianwen- Martian Probe One  ……On the 20th May 2022 on the surface of Utopia Planitia on the Planet Mars doing the ultimate Selfie by the CNSA CLEP Tianwen Mars orbiting Probe Satellite obtaining ​​The medium-resolution images obtained by the Tianwen-1 mission team through the orbiter found that the inspection area of ​​the “Zhurong” Mars rover experienced an obvious sandstorm process. Scientists compared the typical landforms (especially the crater edge) in the 120m resolution images of the “Zhurong” inspection area on March 16 and April 30, 2022 (see Figures 1 and 2, respectively), combined with the recent Mars The change of the solar wing power generation current reflected by the telemetry information of the vehicle can be judged that the local area is experiencing strong sand and dust weather.

At present, the Mars rover inspection area has entered winter, and the highest temperature during the daytime has dropped to below minus 20°C, and the lowest temperature at night has dropped to minus 100°C. By mid-July, around the Martian winter solstice, the temperature will drop further. In order to cope with the reduction in the power generation capacity of the solar wing caused by the dusty weather and the extremely low ambient temperature in winter, according to the design plan and flight control strategy, the rover went into sleep mode on May 18. It is expected that around December this year, the “Zhurong” inspection area will enter the early spring season, and will resume normal work after the environmental conditions improve.

The orbiter is implementing remote sensing exploration of the global coverage of Mars, and the current imaging area is mainly concentrated in the high latitudes of the southern hemisphere of Mars. The mission team will continue to monitor local weather conditions using the orbiter whenever possible.