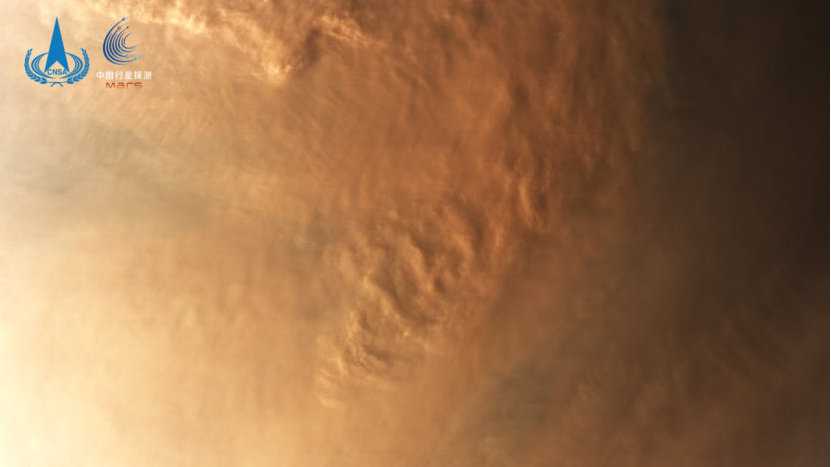 On the months of 5th May 2022   天问一号飞運騎遊達达3亿CNSA – China National Space Administration – ESA – European Space agency Belt and road initiative mars mission…first Mars exploration mission, Tianwen- Martian Probe One  sent back stunning images of the Half Earth Mass size of the Rustic Planet Mars in which show stunning Martian landscape with its iconic polar caps of either southern or northern … With its timeless Stunning Mars Photography. Tianwen-1″ returned high-resolution images of the Mars inspection area The “Zhurong” rover is preparing for winter, and the orbiter continues to carry out orbital exploration…..

As of May 5, 2022, the “Tianwen-1” orbiter has been in orbit for 651 days and is 240 million kilometers away from the earth. The “Zhurong” rover has worked on the surface of Mars for 347 Martian days, with a cumulative travel of 1921 meters, the two devices have accumulated about 940GB of original scientific data, and the operation is normal.

Currently this month of 4th May 2022 it was National Youth Day on China – People’s Republic of China it’s been celebrated very year on the 4th of May, China celebrates Youth Day. The holiday is a day off for the citizens of China and it has been observed since 1949. It is a part of the May holidays, where the whole of China celebrate different occasions during 7 days of May, which is called the ‘golden week’ at one of many Observances. At Peking University, one of the top world top universities where the May Fourth Movement began, the holiday is celebrated with speeches, singing competitions, and other activities.

Youth is just as good as youth Actually Beijing understands that it is a young team of CNSA China National Space Administration Bao Shuo, 29, is a dispatcher of the Beijing Space Flight Control Center. “. She said that youth is for struggle; we must seize the moment, aim for a goal, a dream, and then work hard for it. Contribute to the country, regardless of age or gender; all  Space Scientist Space Engineers ,Takionauts to whom are working hard for their aerospace dreams. Today, we walk with her and share the story of her and her team’s dream of spaceflight and writing youth with struggle….

On 4 May, 1919, student protests in Beijing erupted in the wake of the signing of the Treaty of Versailles, which ended World War I. The treaty, among other things, granted Japan control of Chinese territory in the Shandong Peninsula that Germany had held before the war. This enraged many Chinese who felt they had been betrayed.

Some of the students were arrested at first, but when protests spread and intensified, the Chinese government released the arrested student leaders.

The Fourth of May Movement came out of the protests. At first, it was a movement against imperialism and an attempt to reassert Chinese nationalism and culture. But it quickly diverted into a Communist ideology, and thus is seen as a beginning point to the establishment of the Communist People’s Republic of China.

In 1949, China established Youth Day as a public holiday to be observed every 4 May to remember the events of 1919 and all that followed them. There are special youth events, community service projects, and more organised all over China- People’s Republic of China