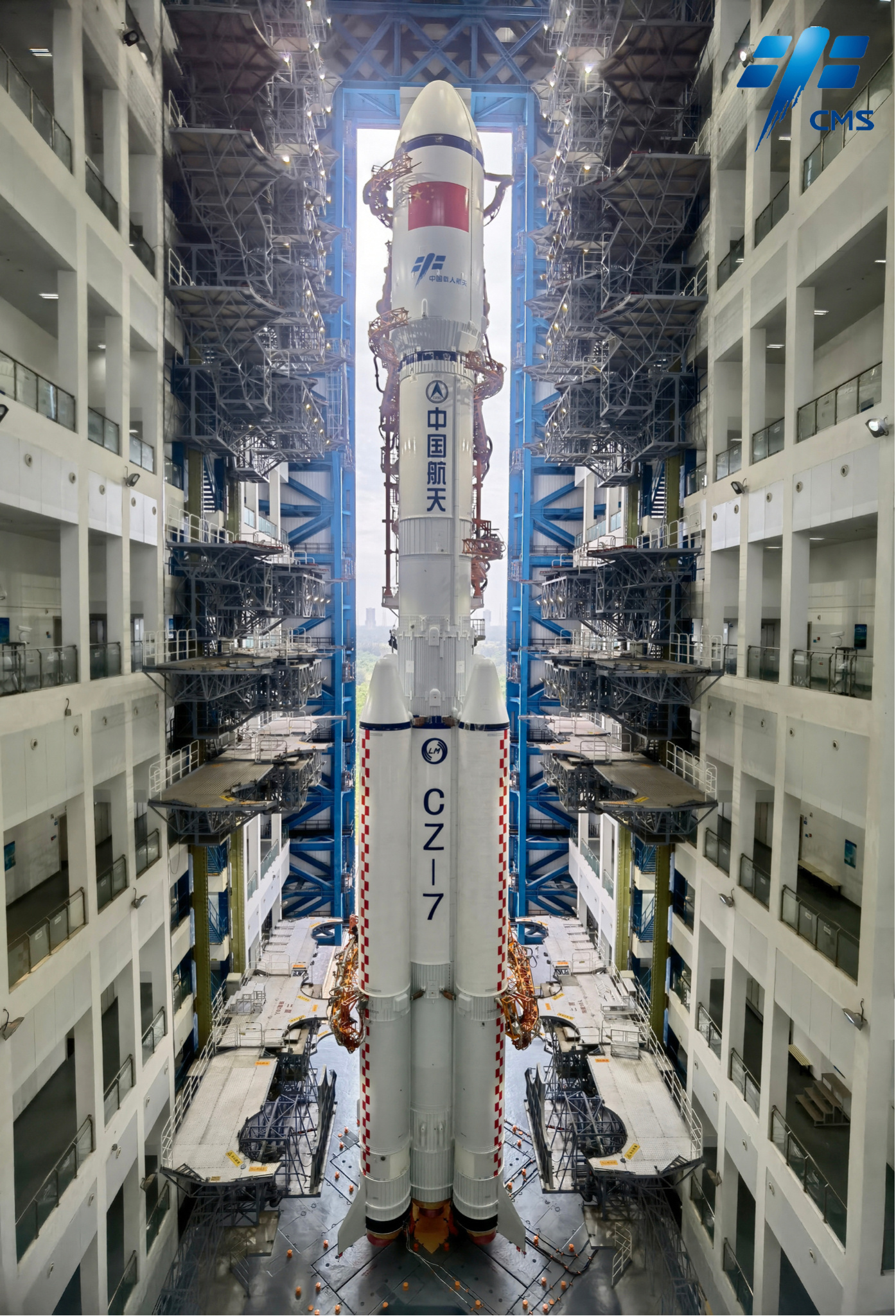 On an interesting day of 7th May Saturday 2022 in Hainan Province –China –People’s Republic of China…. Clear Day  in the district area of the Wenchang – Wenchang Spacecraft launch center in which the awesome team at one of many CNSA –China National Space Administration  that China National Space Administration………….. Finally assembly of the arrived Chang Zheng 7 Long March Carrier Rocket Yao 5 finally assembled at the VAB Vertical Assembly Building previously arrivingly at Wenchang Spacecraft launch site According to the latest news from the China Manned Space Engineering Office, the Chang Zheng- Long March 7 Yao-5 carrier rocket for the Tianzhou-4 launch mission has completed all the research and development work before leaving the factory and is safe today Arrived at Wenchang Space Launch Site. After that, the Long March 7 Yao 5 carrier rocket will carry out the final assembly and testing of the launch site area together with the Tianzhou 4 cargo spacecraft that has arrived earlier. At present, the facilities and equipment of the launch site are in good condition, and the systems participating in the test are preparing for various tasks in an orderly manner.

[Officially announced that the chief designer of the Long March 9 is Yang Hujun] Yang Hujun, born in 1974, has participated in the model development for more than ten years as the deputy chief designer of the Long March 5 and Long March 5 B rockets since the Long March 5 rocket project was established. Important contributions have been made in key rocket technology research, overall design, first flight and the complete success of the remote 3 to 5 missions, the technology of the remote 2 mission has been reset to zero, the overall model and the technology of each sub-system have been mastered.

In 2020, Yang Hujun became the chief designer of the Long March 9 heavy-duty launch vehicle, and is now mainly responsible for key technical research, in-depth demonstration of plans, overall design, and technical mastery of each sub-system. The Long March 9 is a heavy-duty launch vehicle with a larger take-off scale, stronger carrying capacity, higher complexity and greater difficulty in development than the Long March 5. It is a necessary guarantee for significantly improving the overall level of national aerospace science and technology and the comprehensive strength of engineering technology. , is a powerful guarantee for enhancing national self-confidence and enhancing international competitiveness

天州Tianzhou 4 cargo spacecraft will launch soon  as it’ s been transfer to the Launch Complex  in ready to According to the China Manned Space Engineering Office, on May 7, 2022, Beijing time, the Tianzhou 4 cargo spacecraft and the Long March 7 Yao-5 carrier rocket will be vertically transported to launch area. At present, the facilities and equipment of Wenchang Space Launch Site are in good condition, and various functional inspections and joint tests before launch will be carried out as planned….

WITNESS WITH WENCHANG Spacecraft Launch Center 2022 This year, the first launch of China’s space station in orbit will be carried out at Wenchang Spacecraft Launch Center in the swirling coconut forest. As the “youngest” among the four major launch sites in China, she has a long history and an extraordinary mission of the times. She witnesses this era together with us ….