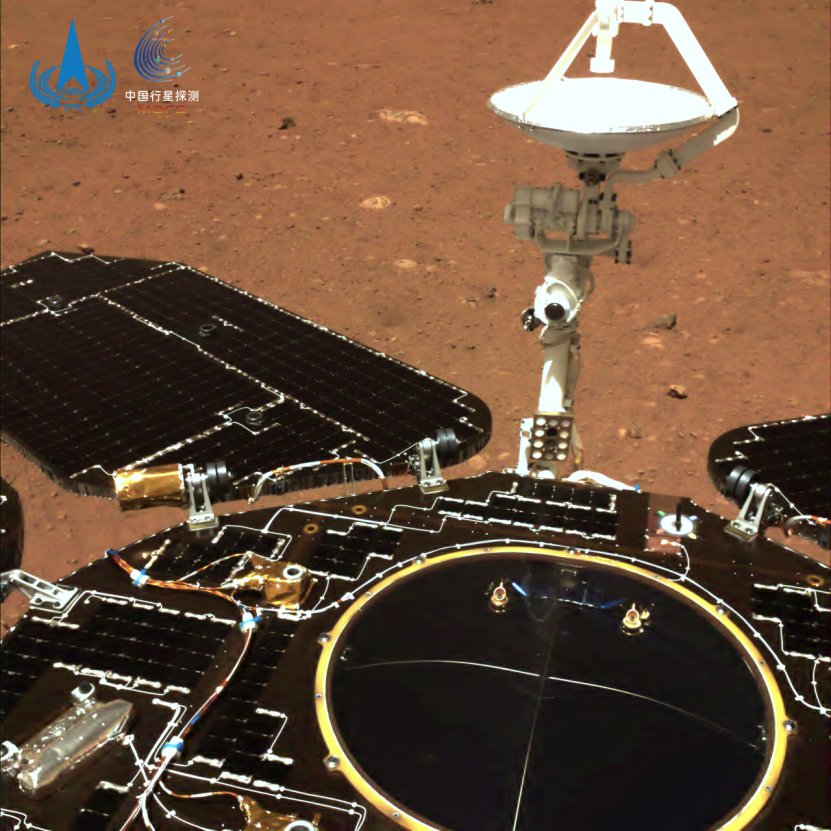 On the months of 5th May 2022   天问一号飞運騎遊達达3亿CNSA – China National Space Administration – ESA – European Space agency Belt and road initiative mars mission…first Mars exploration mission, Tianwen- Martian Probe One  sent back stunning images of the Half Earth Mass size of the Rustic Planet Mars in which show stunning Martian landscape with its iconic polar caps of either southern or northern … With its timeless Stunning Mars Photography. Tianwen-1″ returned high-resolution images of the Mars inspection area The “Zhurong” rover is preparing for winter, and the orbiter continues to carry out orbital exploration…..

As of May 5, 2022, the “Tianwen-1” orbiter has been in orbit for 651 days and is 240 million kilometers away from the earth. The “Zhurong” rover has worked on the surface of Mars for 347 Martian days, with a cumulative travel of 1921 meters, the two devices have accumulated about 940GB of original scientific data, and the operation is normal.

During the ring fire, all seven payloads carried by the “Tianwen-1” orbiter were powered on, and continued to carry out global remote sensing exploration of Mars. Figure 1 is a 0.8 m/pixel image taken by a high-resolution camera on April 17, 2022, of the Triolle crater on Mars, showing the “seasonal slope pattern” on the crater wall. Figure 2 is a local landform image of the Martian Sailor Valley captured by a medium-resolution camera on April 1, 2022, with a resolution of about 65 meters per pixel.

After the “Zhurong” Mars rover completed the 90-Mars day inspection mission on August 15, 2021, it will continue to carry out the expansion inspection and exploration mission. Figure 3 is an image of rocks distributed near impact craters on the Martian surface taken by the Navigation Terrain Camera on April 10, 2022 (the 323rd Martian day after landing). At present, the area where the “Zhurong” rover is located has entered winter. Similar to our earth, after entering winter, the altitude angle of solar illumination in the northern hemisphere area decreases and the duration of illumination shortens. According to the measurements, the local maximum temperature at noon on the rover has dropped to -20°C, and the ambient temperature at night is as low as -100°C. In addition, due to the presence of sand and dust weather, the light intensity is further weakened, which affects the power generation capacity of the solar wing battery array of the Mars rover. Recently, the engineering team adopted the rotation of the solar wing to adjust the light angle, reduce the daily work items and time, and achieve energy balance.

The rotation period of Mars is close to that of Earth. A Martian day is only about 40 minutes longer than that of Earth. The inclination of Mars’ rotation axis is 25.19°, which is also very close to Earth. Therefore, Mars also has day and night alternations and seasonal changes like Earth. The orbital period of Mars is about 687 days, that is, 1 Martian year is equivalent to 1.9 Earth years, which means that the average duration of each season on Mars is about twice as long as on Earth.

In the next two months, the direct sun point will continue to move to the south of Mars, reaching around the Tropic of Cancer around mid-to-late July, when Mars’ northern hemisphere will enter the coldest season of the year. In order to safely survive extreme weather such as Martian winter and sandstorms, the “Zhurong” rover has designed working modes such as autonomous sleep. When the energy is reduced to a certain level, it will automatically enter the sleep mode. After the environmental conditions gradually improve, it will return to normal Operating mode.