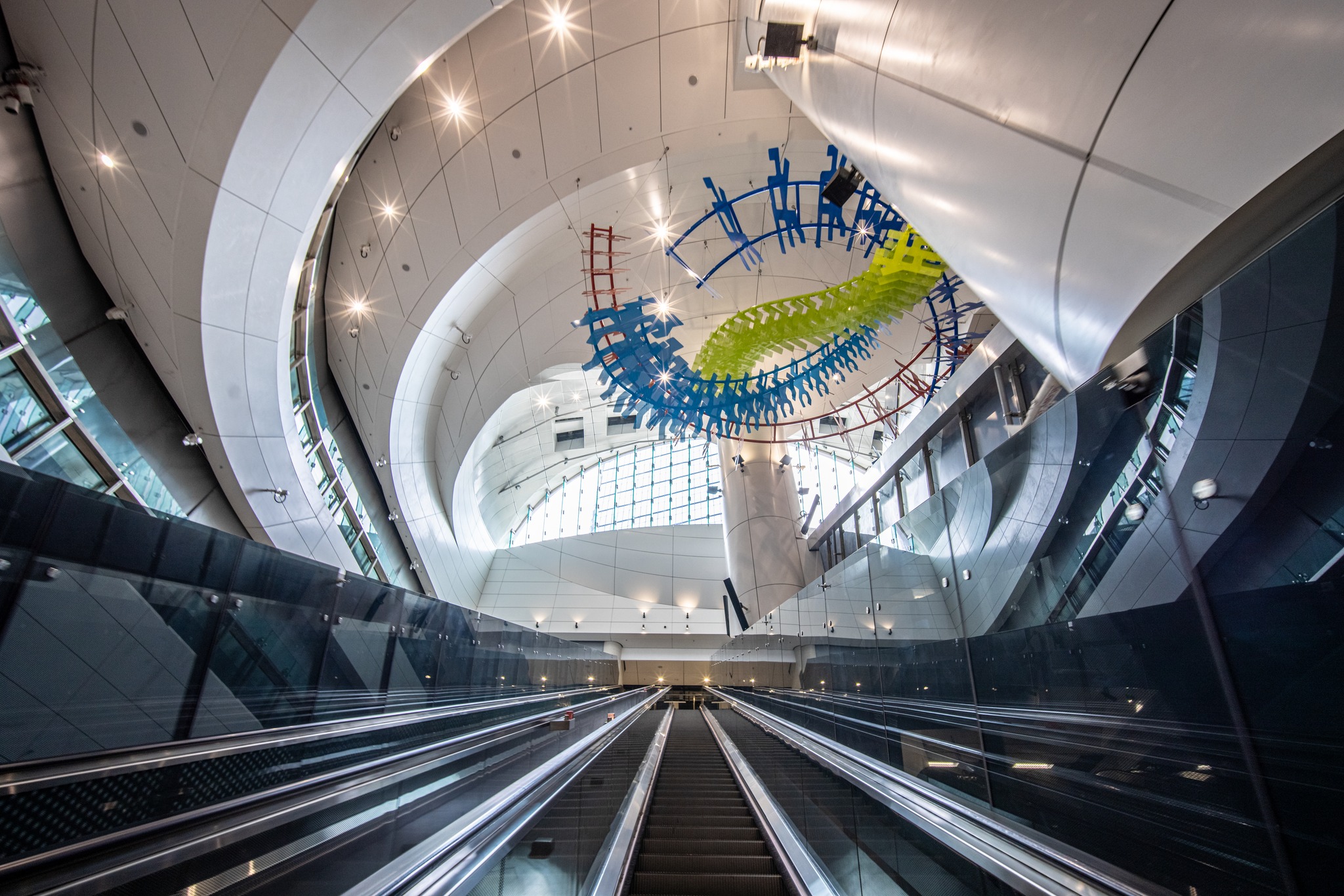 During January 2022 The World’s Leading Public Transport provider The MTR Hong Kong – Hong Kong SAR-China- People’s Republic of China..   The gradual replacement of existing trains with new Korean-manufactured Rotem trains is part of the crucial preparations for the commencement of the East Rail Line (EAL) cross-harbour extension. Before running on the EAL, each new train has to go through a series of inspections and testing. Let’s have a look at a behind-the-scenes video featuring the pre-running preparations! East Rail Line Cross Harbour Extension……

Being the closest station to the Harbour side in the MTR Network, Passengers will be Welcome by a Magnificent Victoria Harbour view.  The artwork in this station has been specially composed of images of the Victoria Harbour, From Different Times … Passengers can reach the Station concourse by going on level down from the ground level … Follo the signs to access different platforms …. There are two Platform levels in Exhibition Centre Station With the Upper Level for Admiralty direction and the Lower for Lo Wu/Lok Ma Chau direction..

There will be two Main Entrances Connected with the Wan Chai footbridge Network, allowing convenient access to different areas in the district …. Whilst Exit A brings you to Harbour Centre and the public transport interchange … go further up will lead you to the Wan Chai Sports grounds via the foot bridge ……. Exit B gives you access to nearby commercial buildings including the HKCEC and the Great Eagle Centre., Connectivity to the HKCEC will be more convenient than ever.. !

The East Rail Line cross-harbour extension will commence service on 15 May. Passengers will be able to cross the harbour from Hung Hom Station to Admiralty Station in about 7 minutes without interchange. Hung Hom Station has also completed its mega transformation. Take the virtual sneak peek with us now to learn about the new look and upcoming arrangements at Hung Hom Station!

Currently Hung Hom Station will be converted from the East Rail Line Terminus, to a Railway Hub, The station itself, which has grown with us over the years has also completed its Mega Transformation … the new East Rail Line Platform will Be Relocated Underneath the existing Tuen Ma Line Platform allowing passengers to interchange more easily via escalators..

From then onwards on Passengers who begin their journey from PolyU and Tsim Sha Tsui East Can follow the colour labels on the ground to access station entrances accordingly  ….. The air conditioned and spacious new platform will provide passengers with a more comfortable environment whilst they wait for the trains… East Rail Line Passengers Can conveniently changes to Tuen Ma Line by going up just one Level ….. There will be also be escalators connecting the East Rail line Platform directly to concourse where the nearby Hong Kong Coliseum can be accessed via Exit C .

In the New Station Concourse Layout, exit/entry gates for the Exits A and D with relocated elsewhere.  Upon exiting via the new gates… passengers may follow the signage to continue their journeys Towards the PolyU or Tsim Sha Tsui East Direction ……

The East Rail Line cross-harbour extension will commence service on 15 May. Upon the commissioning of the new extension of Admiralty Station, it will become the only 4-line mega interchange station in the MTR. Take the virtual sneak peek with us now on the upcoming arrangements at Admiralty Station!

Upon the Commissioning of the new extension of Admiralty Station, it has six levels in total. From the concourse passengers can directly access the transfer lobby via new escalators, going one level down will take you to the East Rail Line Platforms…. To facilitate passengers to the new arrangements large, clear signage has been put up for the different lines …. Passengers who enter the station via Exit A of Admiralty Centre may walk straight ahead to take the island Line or Tsuen Wan Line Trains. For East Line and South island line Just follow the colour labels on the ground and keep walking upon entering gate.. you can reach the Transfer Lobby via escalators. Going one level down will take you to the New East Rail line platforms  , On the Right you can board the trains going towards LO Wu/Lok Mak Chau… On the left is East Rail Line Terminal… Conversely for the South Island Line and East Rail Line Passengers wanting to exit the station just take the escalator on the right from the East Rail Line Level and go straight up to concourse if you want to change to Tusen Wan Line or Island Line Keep walking and following the signs corresponding to different platforms …

The Admiralty Station extension has created a Large Skyline Directing natural light into the underground station to provide a bright and airy environment for passengers … The Skylight is located at the relocated Exit E, Whilst Exit E2 is connected with the footbridge to Tamar Park , allowing easy access to nearby areas…..