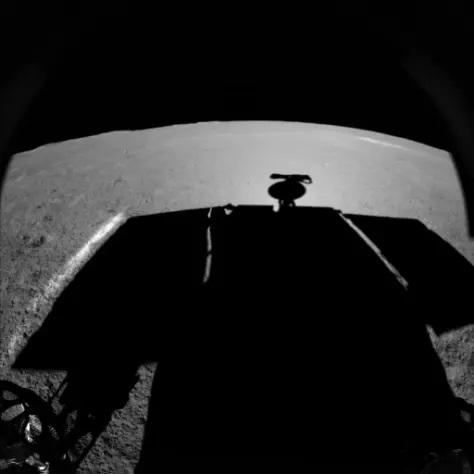 As of Month of April 2022, The CNSA –China National Space Administration CLEP- China Lunar Exploration Program  Belt and Road Initiative Lunar Mission……Chang’e-4 with Yutu two the Lunar rover still working exploring more than moved 1142.39 meters on the other side of the moon on the 103 Kilometers Diameter Von Karman Crater in which is least than two length by length fifty five Kilometers Hong Kong –Macau- Zhuhai Bridges …. Working Exploring the Crater on the other side of the Moon Chang’e Luna….

​​ The latest research results of Chang’e-4 …..At the beginning of 2022, by the State Key Laboratory of Robotics and Systems of Harbin Institute of Technology, Beijing Aerospace Flight Control Center, State Key Laboratory of Remote Sensing Science, Institute of Aeronautical and Astronautical Information, Chinese Academy of Sciences, China Academy of Space Technology, Ryerson University in Canada, etc. A number of units cooperated and published the title of “A 2-year locomotive exploration and scientific investigation of the lunar farside by the Yutu-2 rover” in the internationally renowned academic journal “Science Robotics”. and Scientific Exploration)” cover paper.

The team estimated the mechanical properties of the lunar soil based on the information on the interaction between the lunar rover wheel and the lunar surface and the ground mechanical model. The results show that the pressure-bearing properties of the lunar soil regolith are similar to the dry sand and sandy loam on the earth, and are similar to those in the American Apollo program. Compared with typical lunar soil, it has stronger pressure bearing characteristics. Large lumps of soil were observed adhering to the wheels of “Yutu 2” in images from different locations, while the wheels of “Yutu 2” basically had no clay phenomenon, indicating that the lunar soil cohesion near the landing area of ​​Chang’e 4 is relatively large , the reason may be that it contains a higher proportion of aggregates, which makes soil particles more likely to agglomerate after being rolled by wheels.

The research is based on my country’s lunar exploration missions and faces engineering scientific issues. The relevant results can provide theoretical and technical support for future lunar exploration missions. This research was supported by the National Natural Science Foundation of China (51822502, 91948202, 41771488), the National Key Research and Development Program (2019YFB1309500), and the “111” Innovation and Talent Introducing Program (BP0719002). The link to the original publication of the results: https://www.science.org/doi/10.1126/scirobotics.abj6660
At present, Chang’e-4 is on the 41st night of the moon. The rover has moved 1142.39 meters, and the two devices and one satellite are in good condition.