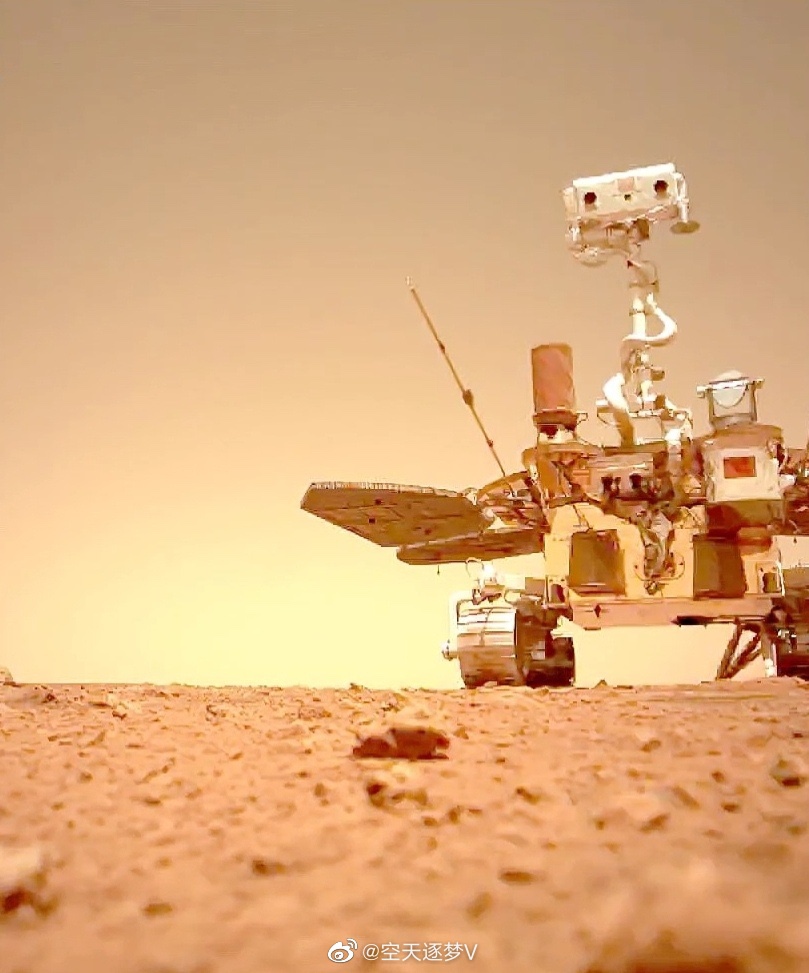 On the months of March 2022  the week of 20th March 2022   天问一号飞運騎遊達达3亿CNSA – China National Space Administration – ESA – European Space agency Belt and road initiative mars mission…first Mars exploration mission, Tianwen- Martian Probe One  sent back stunning images of the Half Earth Mass size of the Rustic Planet Mars in which show stunning Martian landscape with its iconic polar caps of either southern or northern .. With its timeless Stunning Mars Photography. Tianwen-1″ returned high-resolution images of the Mars inspection area

A few days ago, the “Tianwen No. 1” orbiter passed over the inspection area of ​​the Mars rover again, and took a 0.5-meter resolution image of the “Zhurong” inspection area. As of March 24, 2022, the “Zhurong” rover has been working on the surface of Mars for 306 Martian days and has traveled 1,784 meters in total. The “Tianwen-1” orbiter has been in orbit for 609 days and is 277 million kilometers away from the earth. Both are operating normally.

The “Zhurong” rover also sent back selfies from the surface of Mars. Compared with the photos taken just after landing, it can be seen that a thin layer of dust has accumulated on the surface of the rover. At the same time, according to the telemetry information of the rover, the power generation efficiency of the solar wing is affected to a certain extent, but the energy is still sufficient. In order to cope with the dust coverage, the solar wing of the Mars rover has been specially designed, and various measures can be taken to deal with the problem of the reduction of power generation efficiency caused by the sand and dust.

The Martian dust storm will directly affect the energy acquisition of the Mars rover, which has always attracted much attention. The engineering team continued to monitor the Martian sand and dust weather through images obtained by the medium-resolution camera of the “Tianwen-1” orbiter, and found that from late January this year, obvious wind and sand activities began to appear in the area north of 60 ° N latitude on Mars. It can be seen from the figure below that a local sandstorm occurred in this area in February this year, and typical features were covered by a large amount of sand and dust, making it difficult to distinguish.

At present, the northern hemisphere of Mars has begun to enter autumn. According to the analysis of previous detection data, autumn is the season of frequent occurrence of dusty weather on Mars, but no obvious dusty weather has been observed in the inspection area of ​​”Zhurong”.

The “Tianwen-1” orbiter continues to carry out global remote sensing exploration of Mars, and focuses on typical landforms and geological units such as craters, volcanoes, canyons, and dry riverbeds, and obtains high-resolution images. On March 7 this year, the American “Perseverance” rover was photographed while imaging the “Jezero” crater, which is currently located about 200 meters southeast of its landing site.