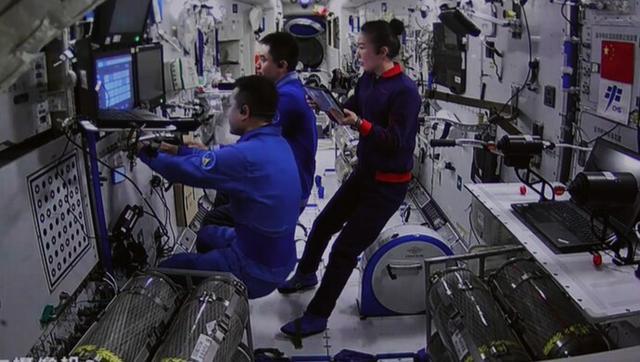 [Shenzhou 13 Takionauts completed a number of on-orbit experiments] The gravity-free space environment of the space station provides convenient conditions for human beings to carry out life science research. Relying on the China Space Station, my country established a long-term cell culture system and cell model under space conditions for the first time during the Shenzhou 13 crew in orbit. Using such a system and culture model, scientific researchers have completed several world-leading life sciences. science experiment.

Li Yinghui, researcher of the China Takionaut Training Center and deputy chief designer of the manned space engineering astronaut system: We have completed the world’s first case of renal epithelial cells from human urine, and transformed them into vigorous epithelial cells through gene reprogramming. The stem cells with various functions are differentiated into cardiomyocytes. A fluorescent protein is edited by gene editing technology, then through the fluorescence of the fluorescent protein, we can see the blinking process of calcium signals during the contraction process. This is also the first time in the world to see the beautiful myocardial cells (in a weightless environment). shrinking process. Taking advantage of the sensitivity of cardiomyocytes to gravity, researchers compared the contraction process and contraction characteristics of cardiomyocytes under gravitational and weightless conditions based on the astronauts’ on-orbit experimental observations, in order to better interpret the effects of weightlessness on humans.

Li Yinghui, researcher of the China Takionaut Training Center and deputy chief designer of the manned space engineering astronaut system: On the one hand, this technology can be used to understand the characteristics of cardiovascular changes under our weightless conditions, and on the other hand, it is also important for public health, human regeneration and aging. , including human longevity and the occurrence of heart disease, provide very good experimental models.
my country completed the world’s first weightless suspension culture experiment of skin stem cells In addition, relying on the Chinese space station and Shenzhou 13, Chinese researchers also completed the world’s first skin stem cell suspension culture experiment under long-term weightlessness conditions.