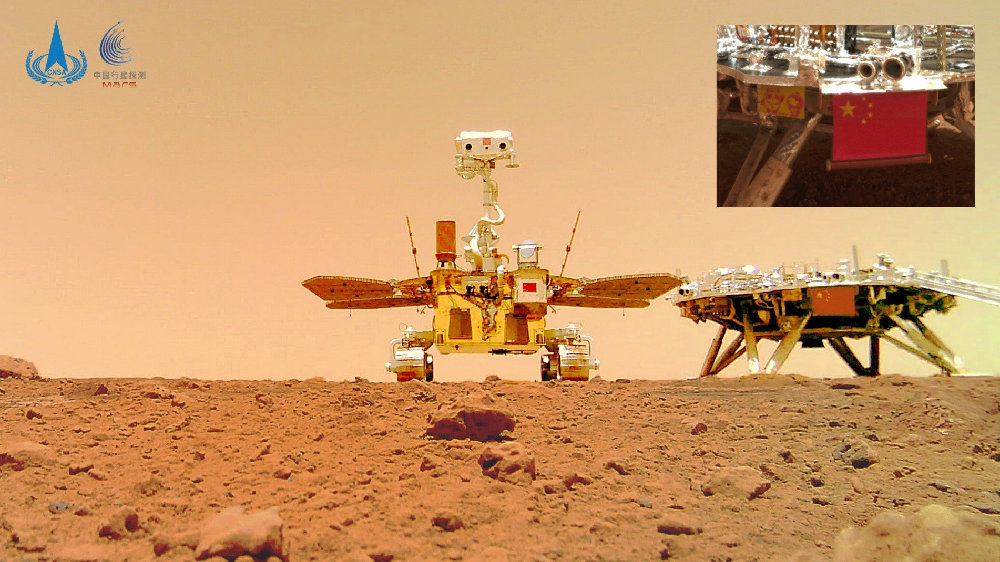 On the eve on 31st January 2022 in which on the 1st February 2022 of the Chinese Lunar New year Spring Festival in the Year of the Tiger, the Tianwen-1 probe sent back a set of selfie videos from Mars orbit to extend New Year wishes to the people of the whole country- China – People’s Republic of China and the Chinese Communities . On the 29th of the twelfth lunar month last year (February 10, 2021), Tianwen-1 arrived on Mars and successfully implemented capture and braking. It became my country’s first artificial Mars satellite, and started a scientific exploration journey to the red planet. a lunar year.

Also on the 4th February 2022 Sunday the Winter Olympics begin! A blessing “falls from the sky” across 320 million kilometers! Previously, the mascots of the Beijing Winter Olympics and the Winter Paralympics, Bing DunDun and Xue RongRong, landed on Mars on Tianwen-1, and took a group photo with the Zhurong Mars rover, which was a dream ..

Also that Day the Tianwen-1 probe, the five-star red flag and the emblems of the Beijing Winter Olympics and Paralympic Games took a selfie in the same frame.

Beijing is the first city with both summer and winter Olympics, and Tianwen-1 is China’s first interplanetary exploration mission, sending the mascots and logos of the Winter Olympics and Paralympics to Mars. The Chinese expression is the Chinese nation’s advocacy and pursuit of faster, higher, stronger and more united.

This set of “cosmic-level” photos returned from Mars orbit was taken by the “selfie” camera carried by the Tianwen-1 probe. This group of photos is not only a “highest” Winter Olympics gift to friends on the ground, but also a highlight witness to the world’s shared Olympic moments!

As of February 4th 2022, Tianwen-1 has been in orbit for 561 days, and the Zhurong rover has worked for 259 Martian days, traveling a total of 1,537 meters. Both the orbiter and the rover are in good condition and operating normally.