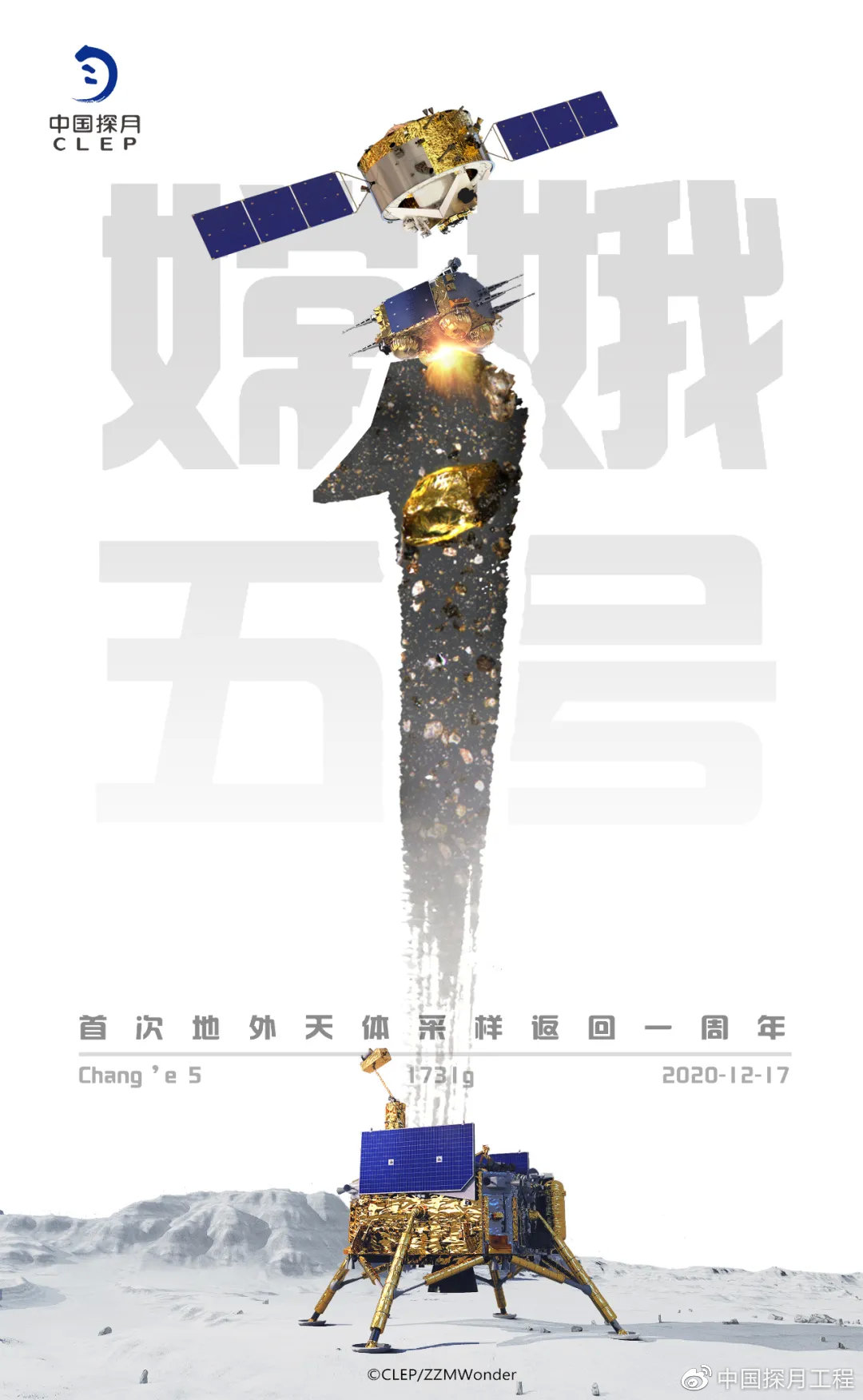 ​​At 23:10 on December 3, 2020, the Chang’e-5 ascender carried a lunar sample to take off from the lunar surface. About 6 minutes later, it entered an elliptical orbit around the moon. At 2:13 on December 6, the ascender accurately reached the scheduled “handover” position 50 kilometers in front of the orbit-return assembly and about 10 kilometers above it. At 5:42, the ascender and the orbit-returning assembly completed the rendezvous and docking. At 6 o’clock, the sample packaging container was transferred from the ascender to the returner. This process of autonomous rendezvous and docking and sample transfer is like the handover process in a 100-meter relay race. It is brilliant and highly technical. Using a lunar orbital rendezvous and docking after take-off from the lunar surface, rather than a direct lunar-to-ground transfer after taking off from the lunar surface, this design is conducive to collecting and carrying more samples back to the earth, and for technical accumulation and verification for subsequent missions.

After the Chang’e-5 probe undergoes a lunar-to-earth transfer, the returner and the orbiter are separated and transferred to the return re-entry section, using a semi-ballistic jump type, that is, a “drifting” return method. After two re-entry into the atmosphere, it decelerates in Beijing. At 1:59 on December 17, 2020, the returner successfully landed in the planned area of ​​Siziwang Banner, Inner Mongolia, marking the successful completion of my country’s first extraterrestrial celestial body sampling and return mission.

At about 1 am on the 17th, the Beijing Aerospace Flight Control Center injected high-precision navigation parameters into the Chang’e-5 orbiter and returner combination through the ground measurement and control station. After that, the orbiter and the returner were normally unlocked and separated at a height of about 5,000 kilometers above the sea level of the South Atlantic Ocean, and the orbiter completed the evasive maneuver as planned. At 1:33 in the morning, the Chang’e-5 returner entered the earth’s atmosphere at a high speed close to the second cosmic speed (about 11.2 kilometers per second) at a height of about 120 kilometers above the ground, and performed the first aerodynamic deceleration. After descending to a predetermined altitude, the retractor jumps up out of the atmosphere and begins to slide down after reaching the highest point. After that, the returner enters the atmosphere again and performs a second aerodynamic deceleration. When descending to a height of about 10 kilometers above the ground, the retractor opened the parachute to complete the final deceleration and maintain a stable attitude, and then landed smoothly in the predetermined area.

During the 30-second parachute opening process, a total of 3 work phases were completed. A series of actions were completed to open the parachute with the flip cover, decelerate the deceleration parachute, pull out the main parachute by the deceleration parachute separation, open the parachute like a closed main parachute, and fully open the main parachute and descend steadily. The work of the recovery system is interlocked. Any mistake will cause the catastrophic consequences of the hard landing of the returner. All the work links cannot be controlled and adjusted from the ground. The recovery system needs to complete these accurately and reliably in such a short time. The action ensures that the returner can safely land at the predetermined location.

Before welcoming the return of Chang’e 5 at the Siziwangqi landing site, a snowfall also arrived as expected, putting a layer of “dress” on the landing site and also brought great difficulty to the search and recovery of the mission. In order to ensure this mission, the search and recovery brigade of a certain base that performed the search and recovery mission organized several rounds of search and recovery exercises under extreme weather conditions such as “extreme cold, dark night, and freezing”. In the end, the search team arrived at the landing site about half an hour after landing and successfully completed the mission. Chang’e 5 obtained a total of 1,731 grams of lunar samples, which is also in line with the characteristics of China’s lunar exploration project. It took 17 years and went through three steps of “circumnavigating, descending, and returning” to draw a blueprint for China’s lunar exploration.

Dream set sail, we walk along the way!

Looking forward to the next highlight of China’s lunar exploration project!