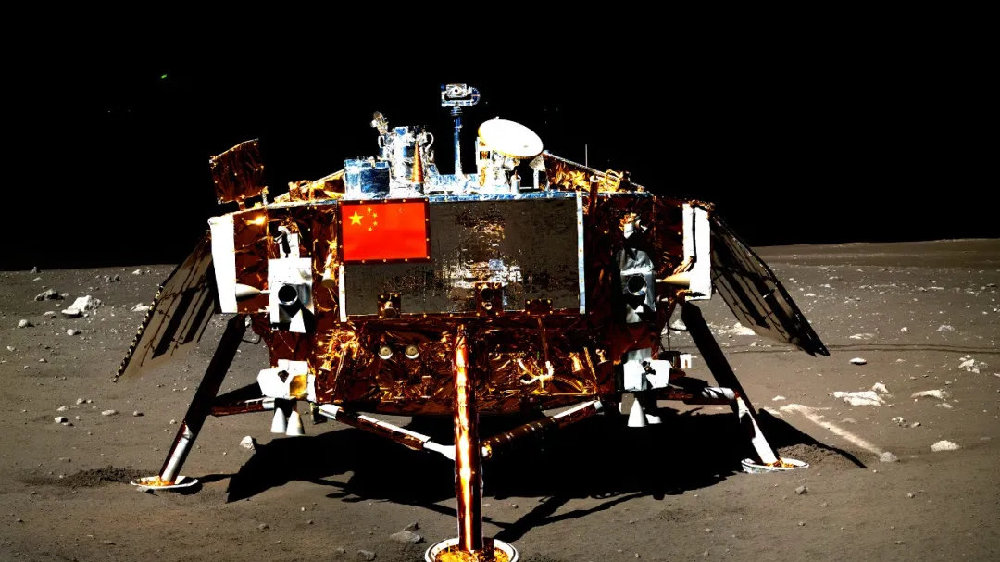 八年前的今天，嫦娥三号成功落月！Today, 8 years ago, Chang’e-3 successfully landed on the moon!

​​ As of Month of December 2021, The CNSA –China National Space Administration CLEP- China Lunar Exploration Program  Belt and Road Initiative Lunar Mission……Chang’e-4with Yutu One the Lunar rover Today in 15th December on 14th December 2013  in which is on eight years ago 2013 the CNSA CLEP China National Space Administration – China Luna Exploration Program Chang’e-3 probe successfully landed on the moon China- People’s Republic of China  becomes the third country in the world A country capable of independently implementing a soft landing on the moon on Sinus Iridium Nearby Mare Imbrium ….

8 years ago Chang’e-3 makes the five-star red flag China’s Flag debut on the moon on that day Review looking through back in time eight years ago on  The historical moment of the successful landing of Chang’e-3 Lunar Lander.. landing on the The landing site of China’s first Moon lander Chang’e-3 has been named “Guang Han Gong（广寒宫） (Guang: widely, extensively; Han: cold, freezing；Gong: Palace) ” or “Moon Palace” by the International Astronomical Union (IAU), China’s State Administration of Science, Technology and Industry for National Defense (SASTIND). Three nearby impact craters were given the names Zi Wei, Tian Shi and Tai Wei, three constellations in traditional Chinese astrology

On December 14, 2013, China’s first unmanned moon landing probe, Chang’e-3, successfully landed on the moon. The setting moon starts at an altitude of 15 kilometers. During the 11-minute setting of the moon, Chang’e-3 relied on autonomous control to go through six stages: main deceleration, rapid adjustment, approach, hovering, obstacle avoidance, and slow descent. 1.7 kilometers per second gradually reduced to 0. At an altitude of 100 meters from the lunar surface, the probe stopped temporarily and used sensors to observe the landing area to avoid obstacles and select a landing site. After walking the last few meters in free fall, the four landing legs that steadily “stand” on the surface of the moon touched the moon, indicating that Chang’e-3 landed perfectly in the Hongwan area of ​​the moon.

The landing site of Chang’e-3 has good communications and sunshine conditions in the Hongwan area of ​​the moon, and the terrain is relatively flat. No human probe has ever visited before. This area, later named “Guanghan Palace” by the International Astronomical Union, is not only the landing site of Chang’e-3, but also a new starting point for China’s lunar exploration.

While achieving a soft landing on the moon, Chang’e-3 also shoulders the mission of breaking through key technologies such as automatic patrol surveys, deep space measurement and control communications, and moon night survival. The Chang’e-3 lunar probe consisting of the lander and the “Yutu” lunar rover has a total weight of nearly 3.8 tons. In the following time, the “Yutu” left the lander and began scientific exploration, and the lander conducted in-situ detection at the landing site.

Chang’e-3 did not live up to high expectations. It saw the earth on the moon for the first time,  obtained images of the earth’s plasma layer for the first time, and completed the first geological profile of the moon and the first celestial body survey. With the successful completion of the mission of Chang’e-3, China’s three-step strategy of “orbiting, landing, and returning” for China’s lunar exploration project has progressed smoothly, and has begun to fully enter a new stage of unmanned automatic sampling and return.