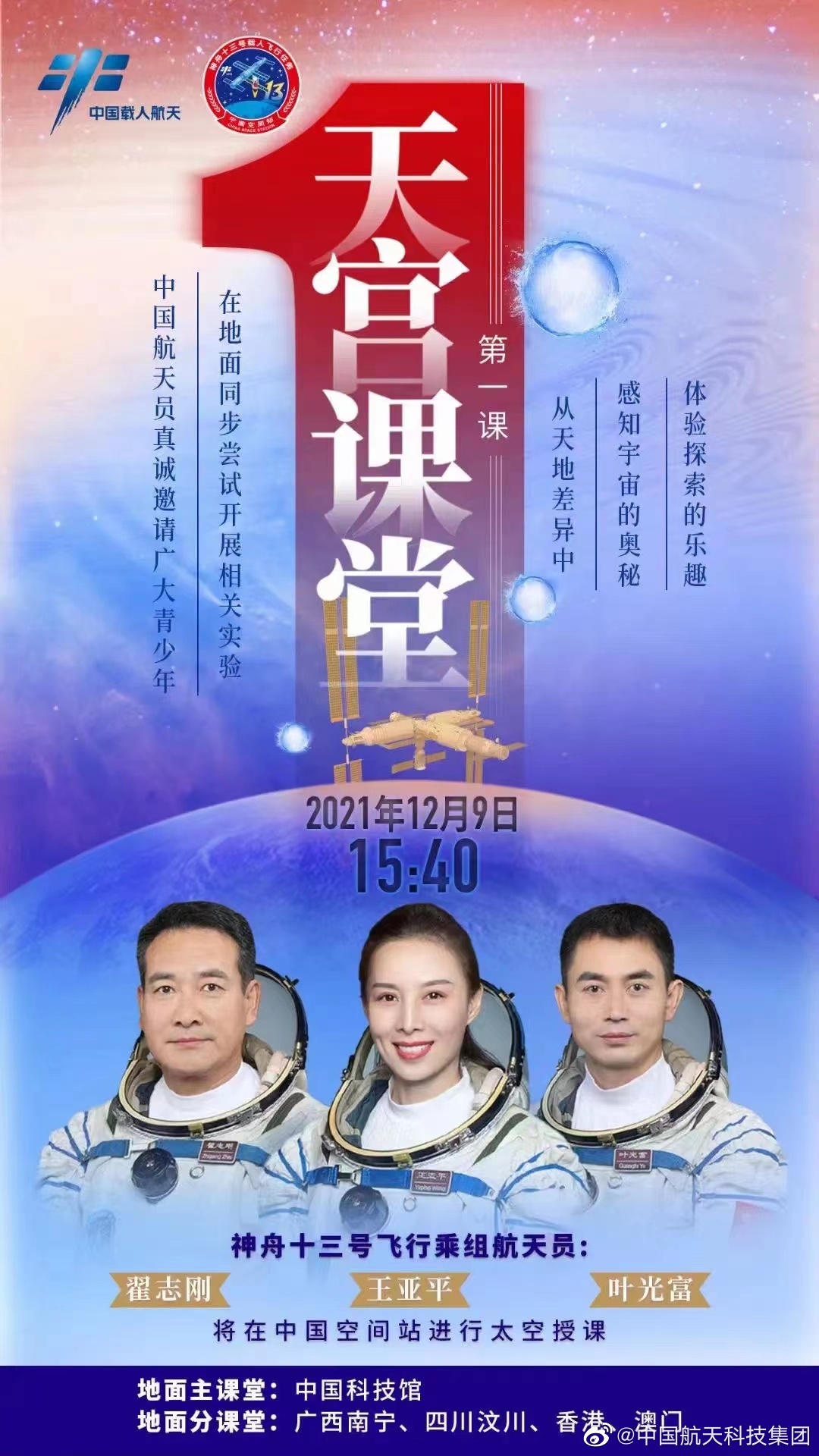 On 9th December 2021, the crew of the Shenzhou 13 will be conducting a Space Teaching from Space orbiting around the planet Earth towards the Students of China – People’s Republic of China on a live streaming broadcast on a multiple various media Platform in covering the Mainland, also two of its SAR- Special Administrative region of Hong Kong SAR and Macau SAR at 1540 Hours Hong Kong SAR –Beijing time The Chinese Space Station conducts space teaching. The China Central Radio and Television Station will conduct live broadcasts throughout the whole process.

This space teaching activity will be conducted in a space-to-earth interactive manner, with ground-based main classrooms set up in the China Science and Technology Museum, and ground-based sub-classes in Nanning, Guangxi, Wenchuan, Hong Kong, and Macau. At that time, 3 astronauts will introduce and display the work and life scenes of the China Space Station in orbit, demonstrate cytology experiments, object motion, liquid surface tension and other phenomena in a microgravity environment (the teaching project is attached), and conduct real-time communication with the ground class to spread the load. Human and space knowledge has stimulated the interest of young people in science.

Chinese astronauts sincerely invite young people to try to carry out related experiments on the ground simultaneously, to perceive the mysteries of the universe from the difference between heaven and earth, and experience the joy of exploration.

What kind of experience is it like to live on the space station? What are the interesting things that happen under weightlessness? The live broadcast of “Tiangong Classroom” is about to begin!
Bring your questions quickly, scan the code to enter 空间网课直播 , let’s “rise posture” together!

Looking forward to it! 翟志刚王亚平叶光富直播 See the earth from space and appreciate the vastness of stars; unpack the space meal package and experience life in space; walk into many universities and middle schools across the country to see the N ways to open aerospace science courses; more aerospace science courses Authoritative experts in the field and science and technology experts are guest studios, and space Q&A blind boxes and fun experiments take turns. Move the small bench quickly

Before the class starts, plan a key point first.

So the problem is that besides Skylink, which relay satellites do you know in our country? Source: Our Space