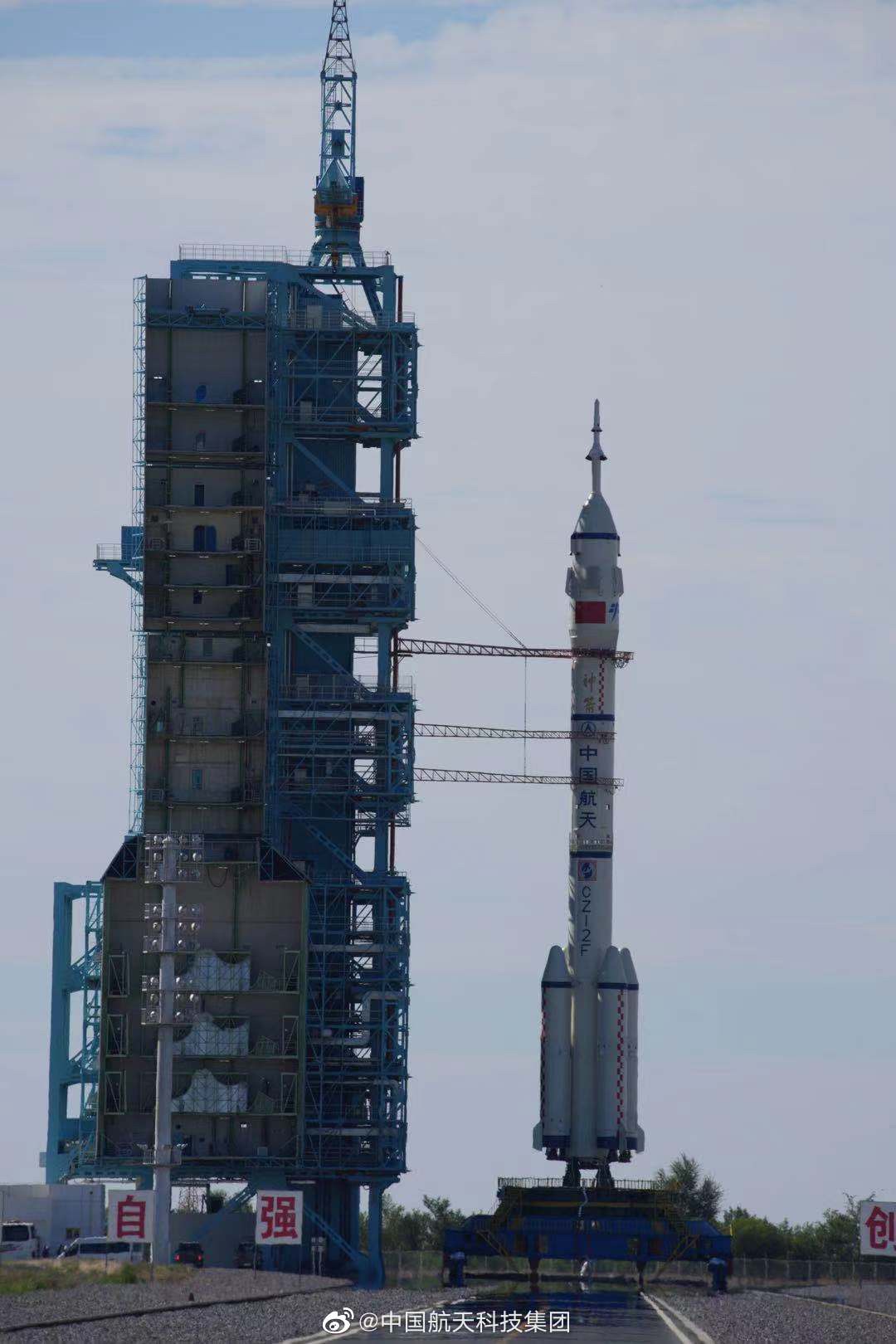 During this week on 17th September 2021 Friday, at Jiuquan Satellite launch Center – Dongfeng Aerospace City – Inner Mongolia – China – People’s  Republic of China … The New Advance Chang Zheng Long March 2 F Yao Shenzhou 13 Carrier Rocket ends emergency duty “standby” and will carry out the Shenzhou 13 launch mission next month….. On  that same week of September 17, the Shenzhou 12 astronaut crewed three Takionauts Nie Haisheng, Liu Boming, Tang Hongbo ended his 90-day space mission on setting up their second home on the , returned victoriously, and returned to the embrace of the great motherland…… At the Jiuquan Satellite Launch Center not far from their landing site, the Chang Zheng- Long March 2 F Yao 13 carrier rocket was like a loyal guard, and finally took back the sight of the distant view and ended the 90-day emergency duty.” Stand guard”.
As the first rocket in the history of China’s aerospace that integrates emergency rescue and launch missions, Chang Zheng Long March  F Yao 13 Carrier Rocket  has taken more than 5 months from “standing up and in position” to “handover and changing of guard” and “station”, plus the launch preparation time. Its standing time is the longest in China’s manned rockets.

At the same time, the fairing (half cover) ) And the escape tower are also on standby.”
In order to make the “duty station” rocket more comfortable, the developers carefully carried out temperature and humidity analysis for it. Humidity control function meets the requirements of rockets. Standing at different stations in the same plant, Chan Zheng 2F Yao Shenzhou 13 witnessed the whole process of the rocket sister Chang Zheng – Long March 2F Yao Shenzhou 12 final assembly test, transfer and launch. On the morning of June 17th, news of the successful launch of Chang Zheng –Long March 2F Yao Shenzhou 12 and the smooth separation from the manned spacecraft Shenzhou 12 came. The mission of Chang Zheng –Long March2 F Yao Shenzhou 13 also began. It quickly switched to emergency rescue duty and began. “Standing guard”, ready to come forward at any time.

The emergency rescue duty state is tense. In the days when looking into space, every message sent by the astronauts from the space station affects the nerves of the ground duty rocket; every state of the duty rocket is also related to the safety of the astronauts. The “return” of the evacuation.

Chang Zheng – Long March 2F Yao 13 witnessed the busyness of the developers, as if they could feel their expectations, all the parameters were kept in the optimal state. Qin Tong said that after entering the launch site in August, the R&D team did a comprehensive “physical examination” for the pyrotechnics, the structure of the rocket body, the electrical products, the sealed fairing and escape tower, etc., and the results showed that the parameters of the rocket systems were normal. , Stable function. If the space facilities malfunction during the orbit of the astronauts, which may threaten the safety of the astronauts, Chang Zheng –Long March 2F Yao Shenzhou 13 will launch a new spacecraft in the first time to take the astronauts home.

Chang Wuquan, the overall chief designer of the Chang Zheng Long March 2F carrier rocket, introduced that if an accident does happen, the rocket base stage, fairing (half dome) and escape tower can be immediately synchronized and efficiently prepared. After emergency recovery and necessary inspections, the basic stage of the rocket is transferred from the technical area to the launch area, and the corresponding docking and status inspections are performed. At the same time, the fairing and escape tower were respectively buckled and assembled, and headed to the launch area to “rendezvous” with the basic stage of the rocket. After the necessary functional inspections and tests, the rocket enters the launch state, and the entire process can be completed in as little as 10 days. The specific mission is minute, and the launch mission will be carried out within 10 days at the earliest. Although the three astronauts have successfully “home”, the exploration of the reliability of emergency rescue has not stopped.
As the first rocket for the new test and launch process, the Chang Zheng –Long March 2F Yao Shenzhou 13 will enter the emergency-to-normal launch process after completing the emergency rescue duty “stand-by” mission, waiting to complete the launch mission of the Shenzhou 13 manned spacecraft. The research and development team will also continue to explore and continuously optimize the process under the premise of ensuring reliability to pave a way for the follow-up rocket emergency rescue.