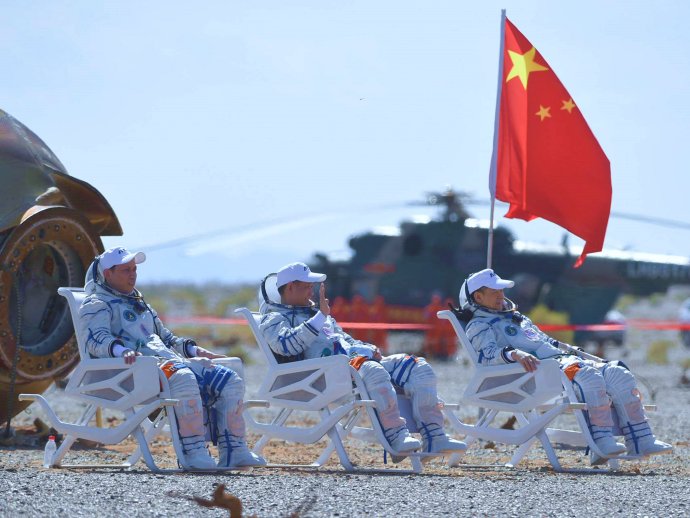 Prefacing  the Crew of the Shenzhou 12 manned spacecraft’s return module successfully landed, and three Takionauts exited safely At 13:34 on September 17, 2021, Beijing time, the Shenzhou 12 manned spacecraft’s return module successfully landed at the Dongfeng landing site , The astronauts Nie Haisheng, Liu Boming, and Tang Hongbo who performed the mission safely and smoothly exited the cabin and are in good physical condition. The first manned mission of the space station stage was a complete success. This is the first time that Dongfeng Landing Field has performed a manned spacecraft search and recovery mission.

At 12:43, the Beijing Aerospace Flight Control Center issued a return instruction through the ground measurement and control station, and the orbital module of the Shenzhou 12 manned spacecraft was successfully separated from the return module. After that, the spacecraft returned to the brake engine to ignite, and the return cabin was separated from the propulsion cabin. After the return module successfully landed, the search and rescue team responsible for the search and rescue mission arrived at the landing site as soon as possible. After the return module door was opened, the medical supervision and insurance personnel confirmed that the astronauts were in good health.

The Shenzhou 12 manned spacecraft was launched from the Jiuquan Satellite Launch Center on June 17, and then docked with the Tianhe core module to form a composite. Three astronauts moved into the core module for a three-month stay. During the orbiting flight, two astronauts exiting the cabin were carried out, and a series of space science experiments and technical tests were carried out. In orbit, the Key technologies for the construction and operation of space stations such as on-orbit maintenance. The complete success of the Shenzhou 12 manned mission has laid a more solid foundation for the construction and operation of the subsequent space station.

During the that Friday Dongfeng Landing Site, already in place From Shenzhou 1 to Shenzhou 11, the Dongfeng Landing Site of Jiuquan Satellite Launch Center has been serving as a “backup”. Today, they will be the protagonists for the first time, performing the manned spacecraft return cabin search mission. In order to welcome the triumphant victory of the Shenzhou 12 Takionaut crew, the landing field system organized the construction of technical conditions, completed the search and rescue plan design, carried out the search and rescue strategy deduction, and carried out comprehensive and detailed preparations. They are ready! Waiting for the heroes to triumph ….

[“Beijing understands”, you are ready! 】Since the launch of the Shenzhou 12 manned spacecraft, the Beijing Aerospace Flight Control Center has been closely cooperating with various systems to jointly ensure that the crew of astronauts will fly in orbit for more than 90 days, and have completed various scheduled missions. 宇宙员聂海胜刘伯明汤洪波回At present, they have completed many joint debugging and joint testing and joint training, and all the plans have been completed. All the participating personnel have excellent assessments, which will provide reliable support for the safe return of the Shenzhou 12 manned spacecraft …

The Shenzhou manned spacecraft return module parachute was developed by the 508 Institute of the Fifth Academy of Space Science and Technology] In order to protect the astronauts who have been on orbit for 93 days to return home safely, the 508 Institute of the Fifth Academy of Aerospace Science and Technology Group developed high reliability for the Shenzhou 12 spacecraft. And a safe recovery landing system to ensure that the spacecraft returns to the cabin to take the last leg of a stable return. The recovery landing system consists of multiple subsystems, including structure, parachute, landing buffer, program control, pyrotechnics, standard position and other types of products. It integrates light, machinery, electricity, heat, high-energy particles, flexible special textile materials, etc. Many types of advanced technologies. The entire recycling process includes more than 10 process controls. The actions of each program are coherent and interlocking, just like a high-level acrobatics performance, and every link cannot be wrong.

The static pressure height controller is only one of the equipment of the program control subsystem. The “behind-the-scenes members” of the entire program control also include recovery distributors, pyrotechnic controllers, program controllers, and travel switches. They have a clear division of labor and each perform its own duties. , Just like different areas of the human brain, through issuing program control command signals, control the “front” actuators to complete the required bombing canopy canopy pull guide umbrella, pull the deceleration parachute, deceleration parachute separation, pull the main parachute, and release the main parachute A series of irreversible actions such as closing the mouth, throwing the heat-proof outsole, turning and hanging.

The 1,200-square-meter parachute cannot be opened all at once when the spacecraft returns to the cabin to land, otherwise the parachute will be broken by the air. The designers of the 508 Research Institute customized a three-level parachute opening program for the spacecraft. First, the two guided parachutes connected in series were opened, and then a deceleration parachute was pulled out by the guided parachute. After working for a period of time, the deceleration parachute is separated from the return cabin, and the main parachute of 1,200 square meters is pulled out at the same time. This series of actions successfully reduced the speed of the spacecraft’s return cabin from the high-speed rail to the speed of ordinary people’s running. In order to prevent the deceleration parachute and the main parachute from being too much force at the moment of opening, both the deceleration parachute and the main parachute adopt the closing technology, that is to say, slow down the process of the umbrella rope from retracting to dispersing, so that the large umbrella of 1200 square meters can be divided. The stage is opened to ensure that the overload of the entire parachute opening process is within the range that the astronauts can bear. The astronauts were able to confirm that the recovery system was working properly because they felt the shaking of this continuous movement.