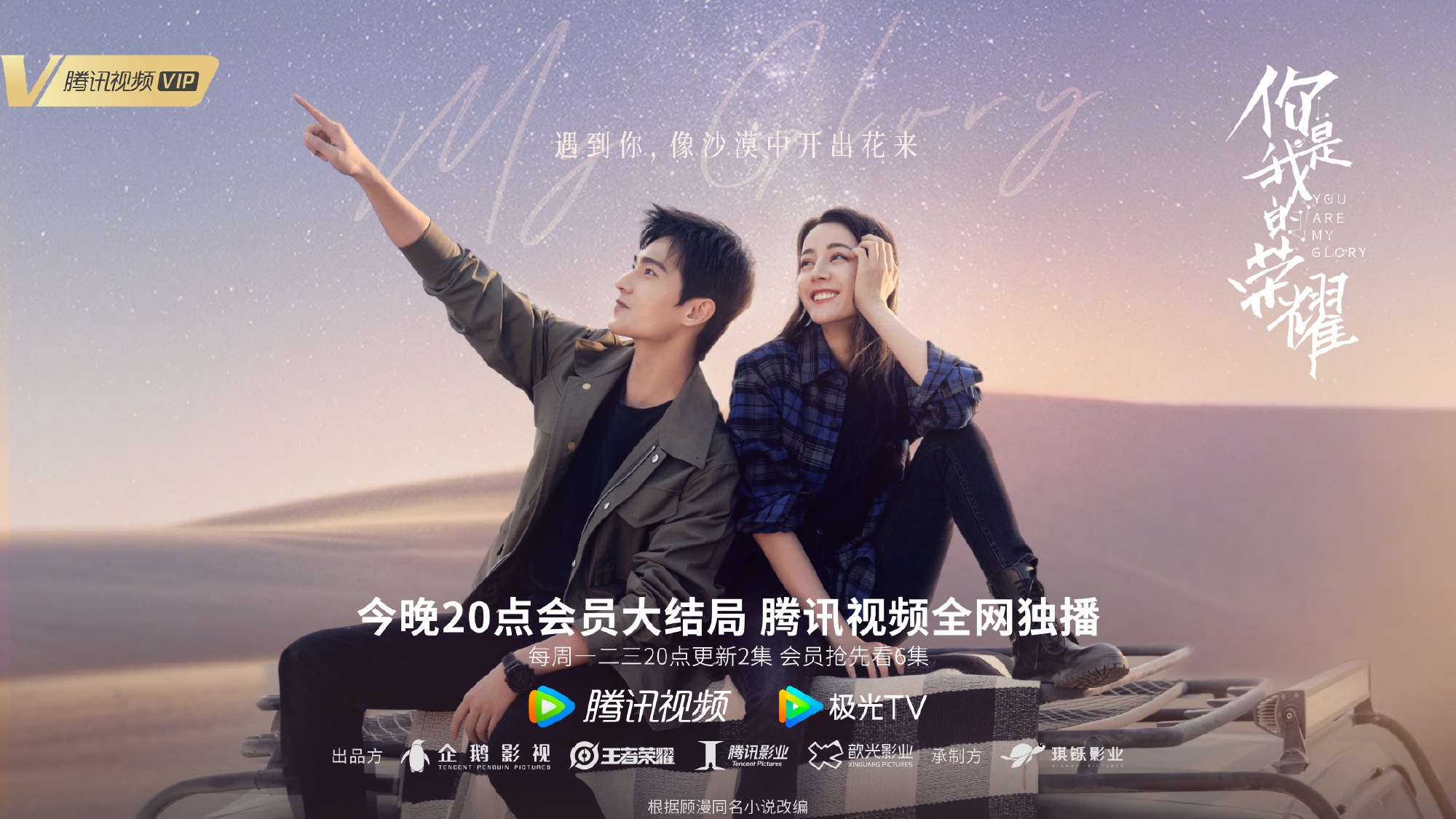 你是我的荣耀You Are my Glory currently and watching intensely binge watching  screening online airing in between Jul 26, 2021 – Aug 16, 2021 with thirty two episodes on Tencent Video……Adapted from the web novel “You’re My Glory” (你是我的荣耀) by Gu Man (顾漫) written- Screen written by Gu Man, Directed by Wang Zhi featuring a premise of Comedy, Romance, youthful life in which the premising  A story that follows an aerospace engineer Yu Tu and the shining star迪丽热巴Dilraba Dilmurat – Qiao JingJing. A decision to start gaming in order to save her endorsement deal brings her face to face with an old crush. As they grow closer, the two forge ahead to become each other’s glory. Being a well-known celebrity, Qiao JingJing has to keep up appearances to maintain her multi-faceted image. Alas, one starts to crack when someone leaks a video of her playing an online game and being terrible at it which is completely inconsistent with the image she has created for herself as the game’s ambassador. Thus, she joins a gaming competition to prove her skills and to prevent herself from losing her endorsements.

In one of the scenes featuring the actual interior of the Shanghai Academy of Spaceflight Technology Also of CASC China Aerospace and Technology Corporation CNSA – China National Space Administration  featuring a series of Long March –Chang Zheng Rockets models displaying in the Academy in which also featuring the, weather satellites, navigation satellites, and communication satellites that appeared in the first episode of the first episode playing tributes towards Space science popularization is in the space log, paying tribute to every space worker in the industry.. !

Qiao JingJing decides to use all of her free time towards improving her game and her decision leads her to reconnect with her old high school classmate,  杨洋Yang -Yang Yu Tu, whom she once had a crush on. He was a legend at their school, outstanding in everything that he does, while Qiao JingJing was just your average girl. Yu Tu has gone on to become an aerospace engineer who is also an expert gamer. It seems that the online game has brought them together once more so she asks him to become her gaming coach.

The launch password was issued on time…..Suddenly, the fire was dazzling, and the Long March- Chang Zheng Five Carrier Rocket standing on the launch tower soared into the sky……

The audience was overjoyed, cheering and cheering echoed with the roar of the rocket, and the scene was unprecedented.

In the measurement and control hall, a man was staring at the screen intently, paying close attention to the flight data until the launch mission was a complete success.

His name is Yu Tu, 38 years old, and the youngest chief designer in the aerospace system.

At this moment, the marginal solar system probe “Sou Shen” developed by his team is flying into space under the support of the Long March Chang Zheng Five Carrier Rocket…

Recently, the TV series “You Are My Glory” ended successfully.

Many “famous aerospace scenes” in reality were restored in the play, which not only made the astronauts who chased the drama praised “it tastes that taste”, but also attracted many young audiences to have a strong interest in the aerospace industry.

Are astronauts all masters who stay up late?

This year, China’s aerospace industry has witnessed many happy events. From the “five, get a long day” to “long seven days to send boat people” to “sky send Shenzhou” Aerospace Science and Technology Group “under the dumplings” speed to sweep the now 29 times aerospace launch success , in which multiple tasks They are all executed at night.

“Stay up late to send a rocket” is not to pursue the shocking effect of the rocket taking off and piercing the sky. Instead, the ignition time is “reversed” according to the spacecraft’s orbit determination requirements.

In the play, many “space cuts” come from reality. What other shining points are there for astronauts at work?

No matter where you are, get to the scene as quickly as possible.

f the satellite loses connection, what impact will it have on us?……For example, mobile phone navigation is lost, satellite TV signals are interrupted, and weather forecast errors have increased sharply… And some satellites involved in national defense security have problems, and the consequences are even more disastrous…….One day, Yutu, who was on vacation, received an emergency call, asking him to rush to the work site immediately because of a sudden failure of an orbiting satellite……..The rescue process was twists and turns. Everyone scrambled for more than a second, day and night, looking for the cause and solution of the failure……..As academician Ye Peijian said: “The satellite is lost, I can’t explain it.”

This is not only a national asset worth hundreds of millions of dollars, it is also an important tool related to the national economy and people’s livelihood. Five days later, the satellite returned to its normal state and continued its on-orbit mission .The astronauts are not afraid of difficulties and are especially capable of fighting.……This group of dedicated, persistent, and ideal aerospace youths are all good!

Work harder and check it carefully!

When doing aerospace, I think about things in the sky, so why do experiments on the ground?…..This also starts with Dongfeng-2. That year, as part of the ground test facilities were still under construction, Dongfeng-2 made its first flight before a number of large-scale ground tests were carried out, which resulted in a failure………Since then, China Aerospace has established the principle of “everything passes ground tests” and “never let the models go to the sky with doubts” . It has accelerated the construction of various ground test facilities and carried out ground tests in an all-round way, greatly improving the mission success rate. This tradition has been passed down through generations of astronauts and has been carried forward to the present…….The meeting room was brightly lit, and Yu Tu and his colleagues were helpless……….In the morning, the patrol device had a problem with the simulation test on the ground. Everyone screened each system one by one, but no reason was found………After the people dispersed in the middle of the night, Yu Tu stayed to continue his calculations and investigations……..The next day, he validated his idea last night, and the experiment was a complete success……Astronauts are not afraid of problems, and are especially capable of tackling key problems.……Faced with boring and complex problems, they dealt with calmly, calmly, and efficiently, without leaving a trace of hidden dangers to heaven.

In the aerospace field, there is still a gap between us and the world’s top level. But the distance of 30 to 40 years does not mean that it takes 30 to 40 years to catch up. The meaning of my hard work and my colleagues is also here.

There are many bright moments in China’s aerospace industry. What picture is the most burning?

Rocket launch must be the answer in many people’s minds.

This year, the Aerospace Science and Technology Group plans to arrange more than 40 space launch missions, and the curtain on the construction of the Chinese space station in orbit has been opened. By 2030, major engineering projects such as the space exploration program for habitable planets close to the solar system will be implemented.

Yu Tu served as the Chief Instructor for the first time, escorting the “Search God” to the universe, which is a marginal probe of the solar system, looking for another magical possibility in the endless universe….Astronauts are not afraid to endure hardships, they are especially capable of giving.…..Doing aerospace and realizing self-worth in the aerospace dream is the origin of enthusiasm for thousands of astronauts.

Who said that aerospace science and engineering men do not understand romance?

Looking up at the sky, you will find that the romance of astronauts is “cosmic”!

The romance of astronauts does not stop there, such as in life——

There is a kind of romance, which is to send the “Rocket” to the person you like. When you miss me, you have it to accompany you.

Some astronauts often lean against a suitcase next to the seat, which contains several changes of clothes and toiletries…..They said that putting a suitcase is convenient for business trips, and you can pick them up and set off immediately…..One heart and Xu Guo are the lofty ambitions of astronauts, but they also have a tender side…..For example, sending “rockets” and writing love letters, even if we get together less and more often, it feels like I am here.

There is a kind of romance, which is to take ID photos together. This matter must be considered carefully. It must be the same location, lighting, and photographer.

Aerospace is a systematic engineering, and any small omissions can lead to huge losses. Therefore, it is the iron law of China Aerospace not to let products go to the sky with hidden dangers. There is no fluke in spaceflight, and we must be rigorous in spaceflight……..In life, once the astronauts become rigorous, they must be serious and attentive…..For example, when two people can take a photo with the same frame under exactly the same conditions……

There is a kind of romance, which is a collective wedding held by aerospace units.

In the Aerospace Science and Technology Group, every year, a unit holds a collective wedding ceremony for aerospace newcomers. As shown in the play, they will join hands to start a new stage of life under the blessing and witness of family members and colleagues.For the astronauts, this special collective wedding is not only a promise to love, but also an oath to the country….

For the rest of my life, I love both Galaxy and you!

The end of the story

“Sou Shen” launch mission was a complete success….. But its journey in the universe has just begun….In order to see more stars,…..China’s spaceflight will…Go ahead and live up to your trust……. Are you chasing “You Are My Glory”?….What is the “famous space scene” in your mind?

Images and visuals are from Weibo and their respectives..