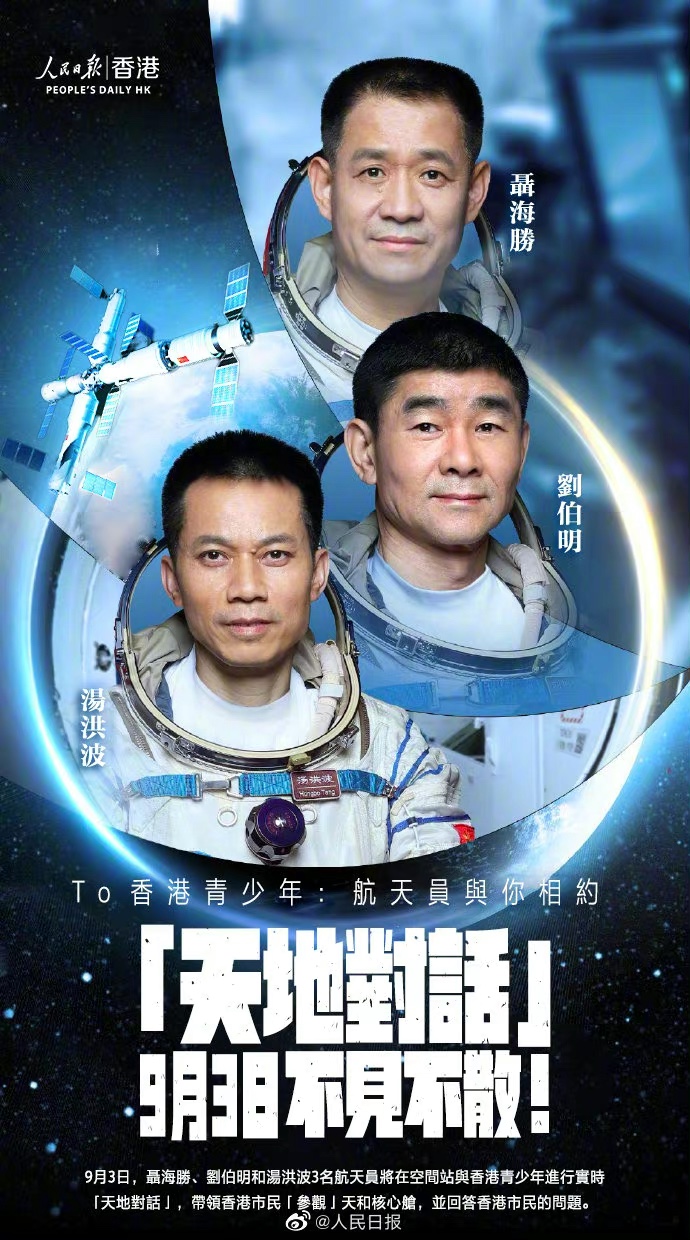 中国空间站飞跃武汉 On  Friday 3rd September 2021, at Hong Kong SAR – Beijing Time  morning, the Belt and Road Initiative CNSA –China National Space Administration  CSS China Space Station, students of the Special Administrative Region Hong Kong SAR – China- People’s Republic of China will get to speak in real time dialogue with three Shenzhou 12 crew Takionauts –Chinese Astronauts Nie Haisheng – Liu Boming – Tang Hongbo . In which gives a during the Symposium conference they will get a virtual tour of the It is reported that during the conversation will give a virtual tour of the core module and answer questions collected in advance. The three astronauts, Nie Haisheng, Liu Boming and Tang Hongbo, on board the Shenzhou12 spaceship were sent into space and entered the space station core module Tianhe on June 17th 2021 and have since carried out a number of tasks as planned….

The Hong Kong SAR Students in which the CNSA China National Space Administration in invited the Students of the Residents of the Special Administrative Region, in which Hong Kong SAR has been a massive contributor with its own space program contributing towards the mainland China- People’s Republic of China’s Space Science – Space Exploration program, in which on multiple lunar and Martians Missions equipment in which is installed on the Chang’e four and Five lunar probe, lander with Yutu two on the Von Karman Crater. For the Planet Mars it’s the Tianwen one Probe for the Lander Zhurong, Tianwen lander…

Invitingly you to “Dialogue between Heaven and Earth”] Under the arrangement of the National Manned Space Engineering Office, on September 3rd  2021 , three astronauts Nie Haisheng, Liu Boming and Tang Hongbo working in orbit will conduct a real-time “world-to-earth dialogue” with Hong Kong youths at the Tiangong space station, leading Hong Kong citizens to visit “Tiangong” Tianhe core cabin. The “Spirit of the Times Brings the Fragrant River” to the “Looking Up to the Stars and Talking to the Heaven” event will start from today soliciting exchange questions from Hong Kong citizens, as well as expressing wishes to astronauts in orbit and Beijing space experts. In addition to the astronauts in orbit, this event will also invite Chinese manned space engineering experts and astronauts who are training on the ground to communicate with Hong Kong youths, introduce the Beijing Space Flight Control Center, the space station system planning and the astronaut training system, and broadcast the national aircraft A collection of human and aerospace engineering films. After the event, all participants will receive a national manned space souvenir, and can also participate in the big draw and have the opportunity to win space commemorative theme prizes. Take the opportunity to ask questions via STEM ALLIANCE HONG KONG