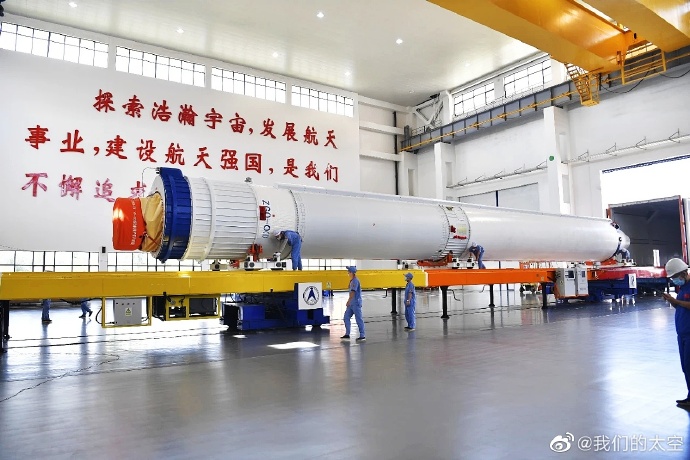 On the week of 16th August 2021 Monday Wenchang Spacecraft launch Center –Hainan Province –China – People’s Republic of China..  It was the preparations of CNSA – China National Space Administration– China’s Tianzhou-3 cargo spacecraft to be prepared for this later month or early next month launching of the Long March- Chang Zheng 7Carrier Rocket  …长七遥四星星安全运到文昌机场航场 According to the China Manned Space Engineering Office, the Long March 7 Yaosi carrier rocket for the Tianzhou-3 mission has completed all the development work before it leaves the factory. It is in Beijing It will be safely transported to Wenchang Space Launch Site on August 16, 2021. The Long March 7 Yaosi carrier rocket and the Tianzhou-3 cargo spacecraft that have already arrived in advance will carry out the final assembly and testing of the launch site as planned.

In addition, the manned spacecraft and launch vehicle for the Shenzhou 13 mission are simultaneously carrying out various preparations at the Jiuquan satellite launch Center –Inner Mongolia in Preparations as planned. According to reports, after my country’s manned space project enters the space station stage, multi-task cross-parallel will become the norm. At present, the facilities and equipment of the two launch sites are in good condition, and the participating systems are fully preparing for missions.

Images and visuals is from Weibo