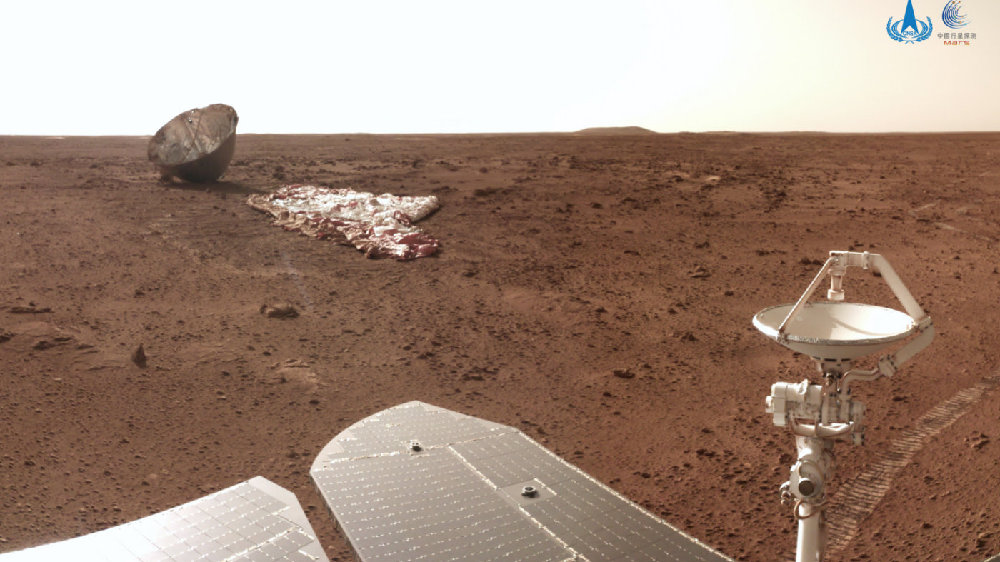 At 12:41:05 on July 23, 2020, the Tianwen-1 mission was successfully launched, taking the first step in China’s planetary exploration. At 19:52 on February 10, 2021, after a 202-day flight of 475 million kilometers, Tianwen-1 rendezvoused with Mars, successfully implemented the capture brake, entered an orbit around Mars, and became my country’s first man-made Mars satellite. .

At 10:40 on May 22, 2021, the “Zhu Rong” rover reached the surface of Mars, began on-orbit testing and inspections, and returned “landing site panorama”, “topography”, “Chinese imprints” and “writings”. Photographs such as Tour Group Photo. On June 11, 2021, the National Space Administration held a ceremony. Vice Premier Liu He unveiled the first batch of scientific image maps obtained on the surface of Mars, marking the complete success of my country’s first Mars exploration mission. Since the start of scientific exploration, the “Zhurong” rover has driven from the landing site to the ancient sea-land junction in the south. The driving route is as follows (produced by Beijing Aerospace Flight Control Center).

On each Martian day, the navigation terrain camera images the landforms along the way. During the journey, the subsurface radar and weather measuring instrument are turned on for detection; after the journey stops, the surface magnetic field detector is turned on for detection; on the way, rocks and rocks with high scientific detection value are encountered. For special landforms such as sand dunes, surface composition detectors, multi-spectral cameras and other payloads carry out fixed-point detection. This week, the rover drove to a sand dune on the way to patrol and explored, and took pictures of the dune landform formed by wind and wind accumulation. Several loads were turned on to detect the dunes and the surrounding environment.

As of July 23, 2021, the “Zhurong” rover has worked on the surface of Mars for 68 Martian days and travelled 585 meters in total; the first anniversary of the orbiter, the distance from the earth is about 378 million kilometers, and the one-way communication delay is about In 21 minutes, the two devices were in good condition, and the working conditions of each system were normal…..

Images and visuals are from CNSA- China National Space Administration also from there respectives..