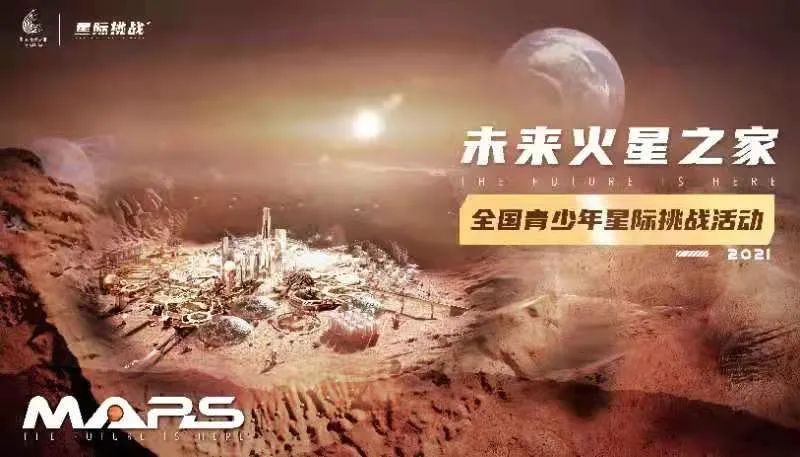 General Secretary Xi Jinping pointed out: The future belongs to the youth, and hope is placed on the youth. At the historical intersection of the “two centenary” goals, in response to the great call of building a powerful space country, inspiring the scientific dreams and scientific thinking of elementary and middle school students, and inspiring the enthusiasm for innovation among young people. On July 17th Saturday , 2021, the national youth “Future Mars” The “Home” Interstellar Challenge was officially launched in the Shanghai Science Hall. This event was organized by the CNSA China National Space Administration’s Lunar Exploration and Space Engineering Center, the Joint Research Center for Deep Space Exploration of the Ministry of Education, the Youth Science and Technology Center of the Chinese Association for Science and Technology, the China Science and Technology Museum, the General Department of the Lunar and Deep Space Exploration of the Chinese Academy of Sciences, the National Astronomical Observatory of the Chinese Academy of Sciences, and the Chinese Launch Vehicle Co-sponsored by the Institute of Technology, China Academy of Space Technology, Shanghai Aerospace Technology Research Institute and other units, Chang’e Benyue Aerospace Technology (Beijing) Co., Ltd. is responsible for the specific organization and implementation.

In his speech at the launch ceremony, Director Liu Jizhong of the National Space Administration’s Lunar Exploration and Space Engineering Center pointed out that interplanetary exploration is highly risky and difficult. my country’s first Mars exploration Tianwen-1 mission has broken through the second cosmic speed launch, interplanetary flight and measurement and control Key technologies such as communications and soft landing on extraterrestrial planets not only left Chinese marks on Mars for the first time, but also successfully achieved the three major goals of circumnavigating, landing and patrolling Mars in a single mission, fully demonstrating the wisdom of Chinese astronauts , Is another significant milestone in the development of China’s aerospace industry, marking my country’s entry into the world’s advanced ranks in the field of planetary exploration.

In his speech, Vice President Yang Nianlu of the Chinese Society of Education said that space education is particularly important to complete the important task of building a powerful space country. He hopes that as many students as possible can participate in the “Future House of Mars” event, and hope that by holding this event, Stimulate the majority of primary and middle school students’ interest in science and aerospace knowledge, and discover a group of students with potential from it, and reserve outstanding talents for the future development of China’s aerospace industry.

The relevant information and requirements of the event are as follows:

Under the guidance of teachers and experts, this activity will design plans for Mars exploration robots, Mars habitation capsules, and Mars migration. Through submission, display, and defense, it will simulate future interstellar exploration, Mars migration, and life and work on Mars.

This event will invite aerospace experts, cultural celebrities, etc. to form a review committee to select plans for participating in the interstellar challenge from the aspects of innovation, realization, and popular science in accordance with the principles of fairness, justice, and openness. Grouped according to elementary school, junior high school, and high school, set corresponding awards. The team group awards include the most united and collaborative award, the best display award, the most innovative award, the most design feasibility award, and the best strategy award; the individual group awards include the best innovation award, the most artistic performance award, the most achievable award, The highest popularity award and excellent work award. The winners also have the opportunity to get a model of the Zhurong Mars rover and the opportunity to observe the space launch in person.

Images and visuals also there respectives are from Weibo..