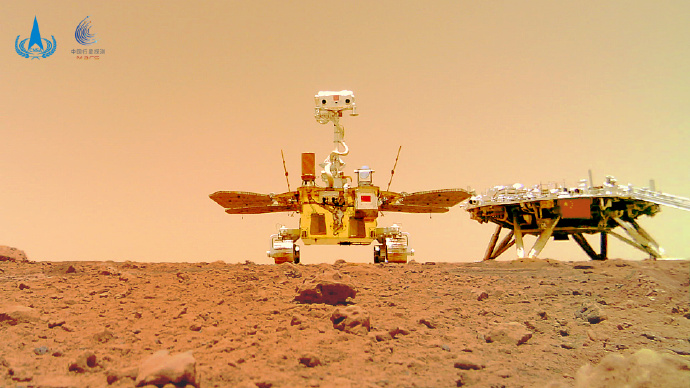 On the Rustic half diameter planet size Red planet Mars  on Hong Kong SAR- Beijing  Earth Sunday time On June 27th  2021 , at the unveiling ceremony of the first batch of scientific visualizations  of the Tianwen-1 rover landing on Mars in Beijing, on the eve of the CPC- Communist Party of China 100 year Anniversary party’s centennial birthday of China- People’s Republic of China , the CNSA – China National Space Administration released a series of real shots of the Tianwen-1 Mars exploration mission landing and patrol exploration, including the parachute and descent process of the landing patrol, and the Zhurong rover leaving the landing platform Sound and video of Mars surface movement, Mars global environment perception image, Mars rustic ​​images on Utopia Planitia…..

On the Same Notation of the panoramic view of the landing site, the topography of Mars, the “Chinese imprint” and the image taken by the “Zhurong” rover were announced. “Photographs with the tour” and other image maps. The release of the first batch of scientific image maps marked the complete success of my country’s first Mars exploration mission.

On June 16, the rover carried out global environment perception, planned the path for the subsequent stage of scientific exploration, and used the rear obstacle avoidance camera to take pictures of the rover.

[Listening to the sound from the Mars rover for the first time] In my country’s previous deep space exploration missions, images and videos are often returned. In my country’s Tianwen-1 Mars exploration mission, the developers specially designed the “collection of sounds” Function. Just as the rover was leaving the landing platform, this precious sound clip was also recorded. This sound is the sound data of the departure process acquired by the recording device installed on the rover during the departure of the landing platform on May 22. The audio includes live sounds during the process of turning on the driving mechanism of the rover, driving on a ramp, and driving onto the surface of Mars.

Jia Yang, deputy chief designer of the Fifth Academy of Aerospace Science and Technology Group and Tianwen-1 probe: What are you hearing now? In fact, it is equivalent to the front grouser of the car. It is about 47 mm, and each small rack over there is 48 mm, so you can ensure that there is a little distance between the front rack and the front rack every time you come. . Then, after turning, it has a collision between the grouser and the rack caused by a microscopic upward and downward movement of one millimeter, which is equivalent to the sound of a metal collision. In addition to the collision sound between the rover gear and the landing platform ladder, there is also the sound of the motor working. The two sounds are mixed together to form the audio of the whole process of the rover leaving the platform.

During the interview, the reporter learned that the task of the sound collection device installed on the rover is not to collect the sound of the rover, but to hear the real sound from Mars…