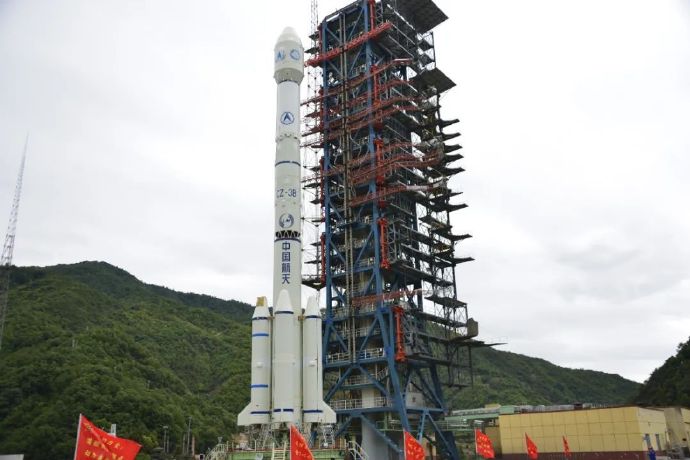 The Fengyun-4B star was developed by the Eighth Academy of Aerospace Science and Technology Group. It has a launch weight of 5400 kg and a design life of 7 years. It is mainly used in my country’s weather analysis and forecasting, environment and disaster monitoring and other fields. The 4A satellite jointly realizes the operation of the dual-satellite networking service of my country’s new generation of geostationary orbit satellites.

The Long March –Chang Zheng 3B external Chang San B booster successfully controls the parachute landing zone] The Chang San B rocket, which performs the FY-4B satellite launch mission, has completed the verification of the booster landing zone control flight based on 300 square meters of controllable Para foil in my country for the first time. After the booster is separated from the core stage, the continuous positioning of the satellite navigation under high dynamics is realized, and various key actions are performed at a predetermined altitude. Finally, under the action of the Para foil, it flies to the target maneuvering point according to the predetermined homing strategy, The test was a complete success.

The Long March – Chang Zheng 3B Chang San B external booster rocket successfully completed the booster landing zone control flight verification side note] The Chang San B rocket carrying out the Fengyun 4 B satellite launch mission is equipped with a 300 square meter controllable parafoil for the first time. The large parafoil carrying booster is in accordance with the homing procedure is controlled and landed safely, which signifies that my country has a controllable recovery capability for a 4-ton load. “This is also the heaviest rocket detachment in the world that uses parafoil control to successfully return home. The test has obtained all the flight data of the landing zone control system, which is for the subsequent engineering application of parachute landing zone control technology and the improvement of the safety of the rocket wreckage landing zone. To provide an important reference, Hu Wei, the deputy chief designer of the Long Three A series of carrier rockets, introduced.

In this loading verification, the 300 square meter parafoil is currently the largest area of ​​parafoil under development in China, and it weighs a full 160 seventy kilograms. , The specification completed the three actions of deployment, homing, and obstacle avoidance. This series of actions is also an important basis for judging the success of this flight verification. In this verification, a total of 21 obstacle avoidance areas were set up within a range of 2,700 kilometers. The realization is quite perfect; the nearest obstacle avoidance point is 10 km~12 km. “Teng Haishan said. In this External Booster Changsan B rocket mission, after the booster and the core stage were separated, the continuous positioning of satellite navigation under high dynamics was realized, and various key actions were performed at the predetermined altitude. Finally, in the wing Under the action of the parachute, the booster flew to the target manoeuvre point according to the predetermined homing strategy, and the test was a complete success.
The successful verification of the parachute landing zone control system created another “international first” for China Aerospace. An important milestone in the field of thruster’s accurate recovery, it also provides strong support for the subsequent accurate recovery and reusability of the rocket separation body. In layman’s terms, in the future, the system can allow the rocket wreck to complete the launch mission to fall in a controlled state in order to Yu landed in a more suitable safe area to minimize the impact on the landing are

This testing is a major breakthrough has been made in the precision recovery technology of the 508 large parafoil, the first international use of a large parafoil controllable recovery rocket booster] June 3, 2021, the booster large parafoil recovery system developed by the 508 was equipped with the Long March III The B carrier rocket conducted its first flight test. After the booster was separated from the core stage of the rocket, the country’s largest parafoil (300 square meters) controlled the 4-ton booster to manoeuvre toward the scheduled landing point and landed in a safe area. After the flight data interpretation and the on-site product inspection in the landing area, the recovery system’s working procedures were normal, the parachutes at all levels decelerated normally, and the automatic homing control was normal. The flight test was successfully completed. This flight test is the first time in the world that a large parafoil has been used to realize the controllable recovery of rocket boosters and the safety control of the landing zone. It indicates that my country has mastered the precise recovery technology of large parafoil and has the ability to adopt large parafoil controllable recovery4 Tonnage load capacity.
Figure 1: The large parafoil after the successful verification of the booster landing zone control flight….

Images and visual are from Weibo