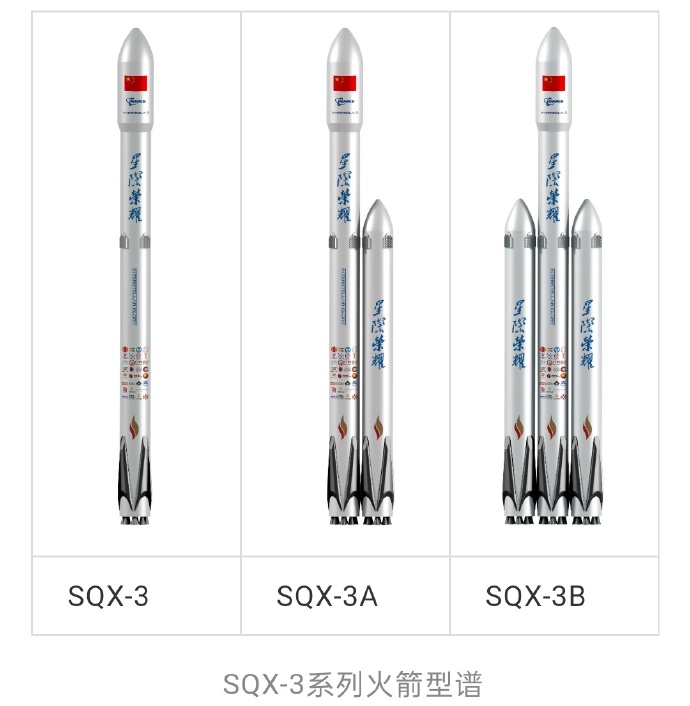 Planning for Beijing Interstellar Glory Space Technology Co., Ltd. is expected to conduct a “Grasshopper Test” similar to SpaceX in 2021, using a reusable engine independently developed by Interstellar Glory to conduct a sub-class 100-kilometer vertical take-off and landing test. Test to verify the performance of the entire one- carrier rocket recovery. Among them are two key technologies: the variable thrust technology of the liquid oxygen methane engine and the re-entry recovery navigation guidance and control technology. In the second half of 2021, Interstellar Glory will execute the first launch of the Hyperbolic II small liquid oxygen methane-powered reusable launch vehicle into orbit and recycle one sub-stage……

The SQX-3 series liquid launch vehicle includes three configurations: SQX-3 basic type, SQX-3A (two-core stage in parallel), and SQX-3B (three-core stage in parallel). The carrying capacity can meet the needs of a variety of load tasks. In addition to meeting large-scale satellite networking, medium and large satellite launch tasks, it also has the capabilities of space station transportation and deep space exploration. SQX-3 inherits the SQX-2 first-stage vertical recovery technology (VTVL), and improves the rocket body diameter and engine thrust to make the carrying capacity reach the scale of a medium-sized launch vehicle; through two-core parallel and three-core parallel , So that the carrying capacity can reach the scale of a large-scale launch vehicle.

The basic model of SQX-3 is a two-stage tandem layout, with a body diameter of 4.2m, a total length of 68m, and a take-off mass of 490t. The first sub-stage is the general core stage, which uses 9 Focus 2 (code-named “JD-2”, sea level thrust 85t) liquid oxygen methane engines in parallel layout, which can be landed vertically on land recovery sites and offshore recovery platforms, with return Field recovery and off-line recovery capabilities; a JD-2 engine vacuum version (vacuum thrust 104t level) is installed in the second stage, which can achieve multiple ignitions, so that the load can be put into orbit in a variety of flight modes, and the use of it is flexible. After the SQX-3 series of liquid carrier rockets complete the program transition, Interstellar Honor will accelerate the pace of rocket development and quickly enter the launch market after completing its first flight in June 2024.

Images and visuals are from Weibo….