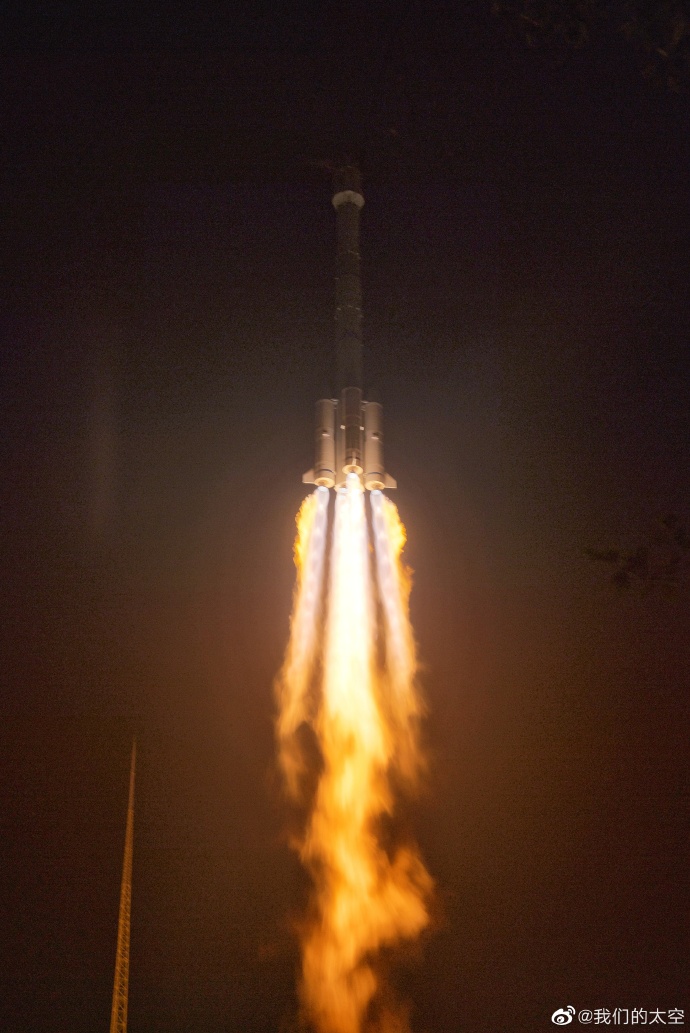 On the 3rd June 2021 in early morning CNSA _China National Space Administration -China – People’s Republic of China At 0017 Hong Kong –Beijing Time on pasting midnight  early morning …. China- People’s Republic of China successfully launched the advance Earth Sciences successful launch of Fengyun 4B] At 0:17 on June 3, amid the huge roar of the Xichang Satellite Launch Center, the Long March 3B- Chang Zheng 3B carrier rocket pierced the night sky and sent the Fengyun 4B star into its intended orbit. The launch was a complete success .from the Xichang Satellite Launch Center Sichuan Province …. This launch is the 119th launch of the Long March series of rockets and the 372nd launch of the Long March series of carrier rockets.

The Fengyun-4B star was developed by the Eighth Academy of Aerospace Science and Technology Group. It has a launch weight of 5400 kg and a design life of 7 years. It is mainly used in my country’s weather analysis and forecasting, environment and disaster monitoring and other fields. The 4A satellite jointly realizes the operation of the dual-satellite networking service of my country’s new generation of geostationary orbit satellites.

“The main characteristics of a geostationary meteorological satellite are reflected in two aspects. The first is to use the advantages of stationary gaze, and the second is to have a very flexible observation mode.” Said Chen Xiaojie, deputy director of the General Office of Meteorology and Environment, 509 Institute of Aerospace Science and Technology Group.
The Fengyun-4A satellite is my country’s first second-generation geostationary meteorological satellite, which is a scientific experimental satellite. The FY-4B satellite is the second satellite in the FY-4 series and the first operational satellite in the series. Based on the FY-4A star, the FY-4B star’s ability to observe this aspect flexibly has been greatly improved.

“The design life of the Fengyun-4 A star is 7 years, and the assessment life is 5 years. The assessment life will expire at the end of this year, but from the current overall situation, the star is expected to continue to work normally for 7 years or more, and the B star will go up. Later, it will form a situation of double star observation in orbit with Star A.” said Chen Qiang, the overall chief designer of Fengyun 4 B Star. According to reports, in the earliest period, the Fengyun 2 can achieve one picture per hour, and then gradually realize one picture for half an hour. When the Fengyun 4A satellite is reached, the image of the entire China area can be updated every 5 minutes. Now with two satellites, you can see two pictures in 5 minutes. “The weather forecast process is very complicated and involves many factors. Satellites play a major role in providing data. The FY-4 A and B satellite networks will generate more, more accurate, and faster updated data. It will help improve the accuracy of forecasting.” said Dong Yaohai, chief designer of Fengyun 4 B satellite.

【FY-4B Star】FY-4B is the second satellite in the FY-4 series. It has a launch weight of 5400 kg and a design life of 7 years. It is also the first operational satellite of the series. After entering orbit, it can realize imaging of a million square kilometers area 3-4 times per minute, and the visible light resolution is the highest among the current global stationary meteorological satellites, reaching 250 meters, which is double that of the A satellite; it will be more flexible to achieve with the A satellite The double-satellite network observation of China has brought a leap in the ability of high-frequency weather observation.
. During the “14th Five-Year Plan” period, my country will also launch two Fengyun-4 series meteorological satellites. Referencing from the Eighth Academy of Aerospace Science and Technology…

During the Fengyun 4 B satellite launch mission, the Long March 3 B to 3 Yao 72 launch vehicle completed 17 technologies in terms of engine and utilization control machine. The state improvement makes the quality of the engine more stable and reliable, and at the same time the use of the control machine is improved and optimized to continuously improve the reliability and safety of the product.
“Using the control machine is mainly used to adjust the propellant mixture ratio of the rocket’s three-stage engine to achieve the same proportional consumption of the two propellants, which can effectively guarantee the carrying capacity. We can further improve the system by optimizing the design of the relay using the control machine. Reliability of work.” Zhang Tao said.
In terms of quality management, the Changsan B Rocket Launch Team has implemented an electronic, full-process launch site quality verification system for the first time, linking the refinement of quality control with the verification system, and improving the efficiency of quality management.