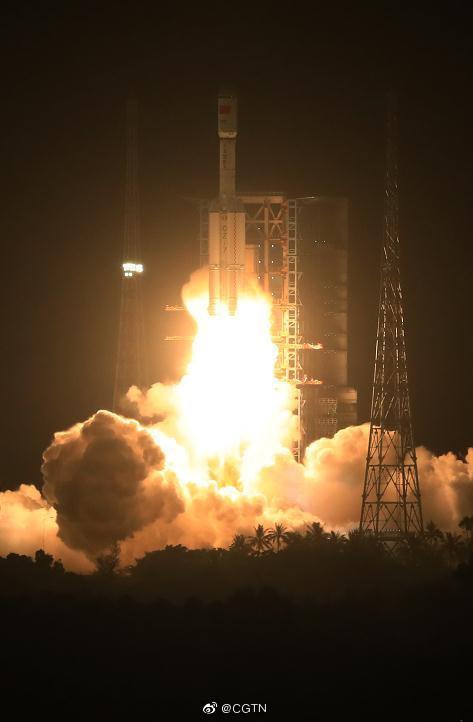 When the cargo spacecraft is connected to the core cabin for power supply, how to deal with the excess electricity? Developers have their own methods. Wang Zhenxu introduced that in the Tianzhou No. 2 cabin, a shunt regulator is installed, through which the excess electricity of the solar battery wing can be shunted. In the future, there will be the challenge of joint power supply of multiple combinations, but the power sub-system can always adapt. This is the intelligent management of the power sub-system in the space station era.

The newly advance variant of the Long March –Chang Zheng 7 Carrier Rocket has more than 130 improvements to make its performance better] This mission is the third launch of the Long March 7 carrier rocket. 4 years have passed since the Long March 7 Yao-2 launches. During this period, the model team Carried out a large number of optimized and improved designs, which not only realized the technological leap from “zero window” to “narrow window” launch, but also through more than 130 improvements such as simplifying and optimizing the on-board measurement system, and optimizing the tank pressurization design. The rocket has better performance and is more conducive to batch production and high-density launch.

Optimize the design of pressurization of the tank on the arrow. Combining the analysis of the results of the previous two flight tests, the booster reduces one tank booster gas cylinder without affecting normal use, and optimizes the boost pressure control bands of each module tank to increase the boost pressure. Utilization of gas. The rocket boost, the first-stage tail end and the first-stage transition section are changed from composite coating to ordinary coating. After the improvement, the construction process is simplified and the production cycle is shortened. Taking the first-level post-transition section as an example, the improved production cycle has been shortened from about 18 days to 13 days, laying the foundation for subsequent mass production.
Focusing on zero-window launch, focusing on flight success or failure, sorting out one detail by one detail, fully identifying the weaknesses in the design and making improvements, in addition, drawing inferences about other rocket quality issues from the mechanism to ensure the complete success of this launch mission….

Previously on the 16th May 2021 it’s was Transferring from the final complete advance Long March- Chang Zheng 7 Medium Heavy Carrier Rocket from the vertical assembly building in which has been transferred launch complex.. …. According to the China Manned Space Engineering Office, on May 16, the combination of the Tianzhou-2 cargo spacecraft and the Long March-7 carrier rocket was transferred to the launch area. At present, the facilities and equipment at the launch site are in good condition, and various functional inspections and joint tests before launch will be carried out as planned.

On the morning of May 16, the ship-and-arrow combination of the Tianzhou-2 cargo spacecraft and the Long March 7 Yaosan carrier rocket was launched at the event Driven by the platform, it was successfully transferred from the 502 vertical assembly test plant to station 201 in the launch area. At present, the facilities and equipment at the launch site are in good condition, and various functional inspections and joint tests before launch will be carried out as planned…. On which it was a family and media day for the staff that worked for Wenchang Spacecraft launch complex ….

One of the many foods menus that been onboard is Fish-flavoured pork shreds and Gongbao chicken in space Tianzhou-2 will carry 3 people and 3 months astronaut consumables, 2 sets of extravehicular space suits and platform materials, and dock with the core module; During its docking at the space station, a number of in-orbit tests will be carried out as planned.
According to the space station construction plan, my country will launch the Shenzhou 12 manned spacecraft next month, and three astronauts will take the spacecraft to the core module. The three astronauts have to work and live in the core module for about three months. Therefore, they must prepare a variety of materials to facilitate their “clothing, food, shelter, transportation” and work in space. There are various daily necessities in the “express” sent by the number.
The food on the space station can be described as a must-see in space, making people salivate from the sky. China’s aerospace food has many traditional Chinese dishes, with obvious Chinese characteristics. The food is not only divided into main and side dishes, but also pays attention to the combination of meat and vegetables, but also has unique flavours. Even the well-known shredded pork and kung pao chicken… all appear on the astronaut’s food list

Transfer of the Tianzhou-2 cargo spacecraft ship-arrow assembly to the launch area] According to the China Manned Space Engineering Office, on May 16th, the Tianzhou-2 cargo spacecraft and the Long March 7 Yaosan carrier rocket assembly was completed Transfer to the launch area. At present, the launch facility is in good condition, and various functional inspections and joint tests will be carried out before launching as planned….

Images and visuals is from Weibo