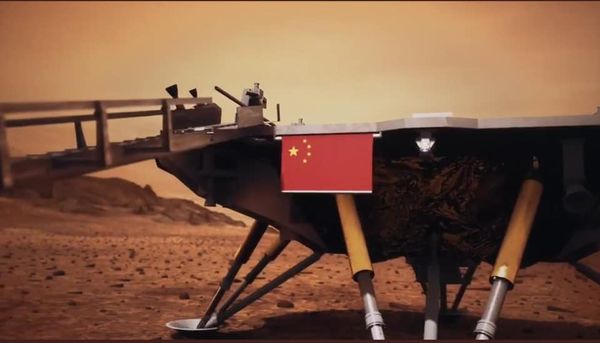 天问一号飞運騎遊達达3亿 …….As of 22nd  May 2021 CNSA – China National Space Administration– ESA – European Space agency Belt and road initiative mars mission…first Mars exploration mission, Tianwen- Martian Probe One …….”祝融号Zhu Rong” Mars Lander – Mars rover successfully sent back telemetry signals and landed on Mars with a complete success in which confirmed it’s now left the Mars Lander Platform National Space Administration that according to the telemetry data, at 10:40 on May 22, the “Zhu Rong” rover safely left the landing platform, reached the surface of Mars, and began to patrol and explore…….

Since the probe was launched on July 23, 2020, during the ground-fire transfer flight and the ring-fire orbit operation, the orbiter is equipped with a medium-resolution camera, a high-resolution camera, a mineral spectrum Analyzer, a magnetometer and other 7 scientific instruments. The payload was started to detect and obtain scientific data. During the fire surface work, the rover will carry out environmental perception, fire surface movement and scientific detection in the patrol area as planned. Through the configuration of the terrain camera, multi-spectral camera, subsurface detection radar, surface composition detector and other 6 payloads, the inspection area Carry out detailed detection. At the same time, the orbiter will operate in the relay orbit to provide stable relay communication for the Mars rover patrol and detection, and take into account the development of surround detection.​​​​

At During  7:18 Hong Kong SAR – Beijing Time  on May 15th 2021 , the scientific research team confirmed according to the telemetry signal sent by the “Zhurong” Mars rover that the Tianwen 1 Landing Patrol successfully landed in the pre-selected landing zone in the southern Utopia Plain of Mars, and my country’s first Mars exploration mission landing on Mars was achieved. A complete success…..