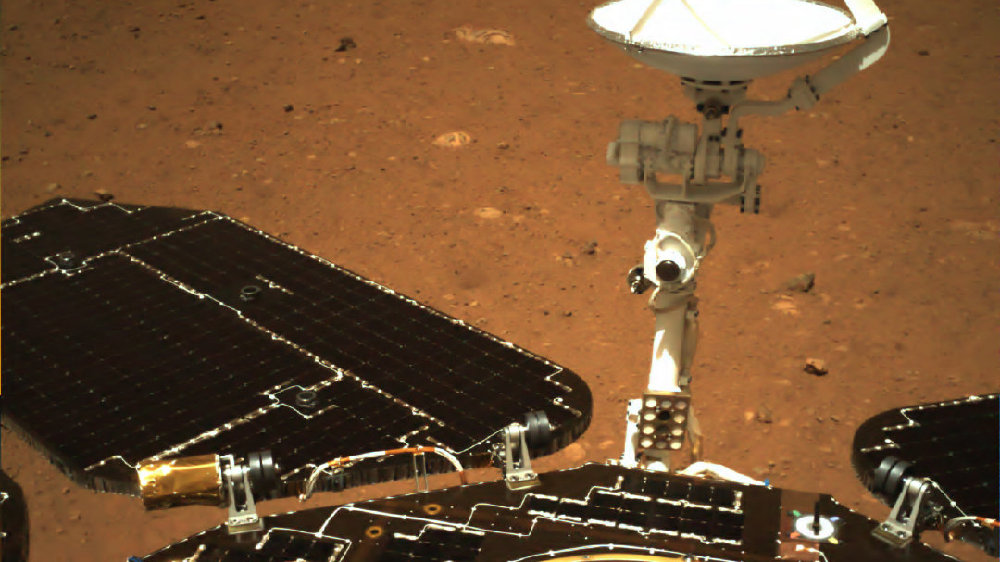 At 7:18 Hong Kong SAR – Beijing Time  on May 15th 2021 , the scientific research team confirmed according to the telemetry signal sent by the “Zhurong” Mars rover that the Tianwen 1 Landing Patrol successfully landed in the pre-selected landing zone in the southern Utopia Plain of Mars, and my country’s first Mars exploration mission landing on Mars was achieved. A complete success.

Hello, everyone, I am the “Zhu Rong” rover. Since I landed on Mars on the 15th, my friends on Earth have moved their benches and have been looking forward to seeing the pictures. I also asked anxiously, what am I up to?

No, today I have provided 2 pictures taken after landing, and a video of the separation of the two devices (the surround device and the landing patrol device) was added for a good value, so that everyone can feast their eyes on it.

Why have you waited so long?

As we all know, the farthest distance between Mars and the Earth is about 400 million kilometers, and radio waves travel at the speed of light, and the attenuation of signal energy is proportional to the square of the propagation distance.

I have configured two communication methods, one is to communicate directly with the earth, and the other is to communicate with the earth through the Tianwen-1 orbiter relay. Why do we need relay to communicate directly? That’s because I am about 320 million kilometers away from the earth, which is too far away. Even if I keep shouting with my throat, the earth can only receive very little data, which is too slow and can only send back the most important information. As soon as I landed on the 15th, I directly reported “I have landed and feel good” to my family, and my friends started cheering for me!

After landing, I took some photos with the camera I carried, and I can’t wait to share them with you. However, if it is sent directly back to the earth, even if it is a photo like Figure 1, it would theoretically take more than eight hours. And because of the rotation of Mars, I can communicate directly with the earth for less than half an hour every day, so I abandoned the function of directly transmitting images to the earth. Therefore, I have to wait for the repeater of the surround device. He is big and has a loud voice, and transmits data to the earth much faster than me.

On the 17th, the orbiter entered the relay orbit, and we first established a communication link. Because he orbits Mars for 8.2 hours, we are often blocked by the big guy Mars, so I have to pay close attention to the precious time of relaying, first send back some important data of my own state, and then send it back Image…..

Currently, I am preparing to leave the landing platform. In the follow-up, I will work closely with the orbiter, not only to take pictures of the Martian landscape, but also to use the six scientific payloads I carry to conduct in-depth exploration of Mars and send more scientific data back to the scientists for research. It’s more important than taking pictures……. !!!!!