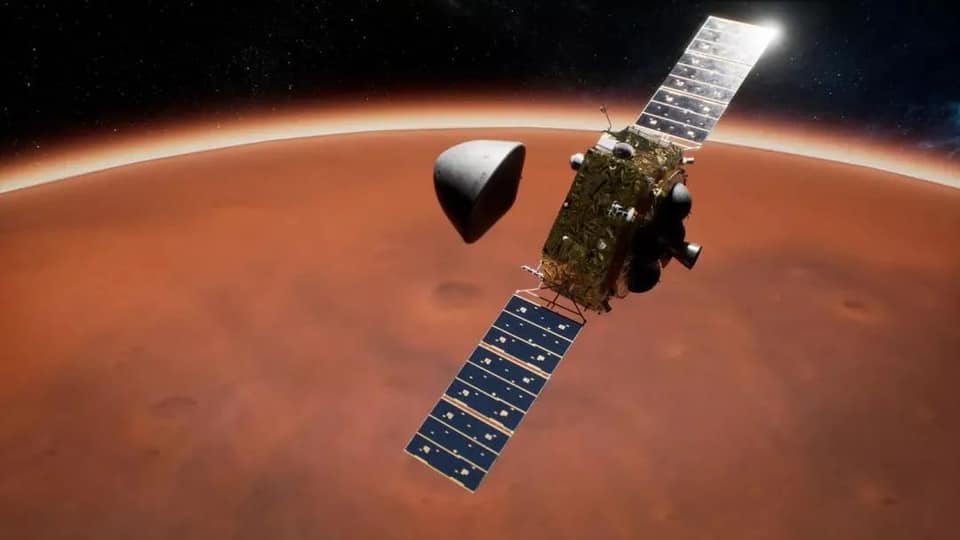 At 7:18 Hong Kong SAR – Beijing Time  on May 15th 2021 , the scientific research team confirmed according to the telemetry signal sent by the “Zhurong” Mars rover that the Tianwen 1 Landing Patrol successfully landed in the pre-selected landing zone in the southern Utopia Plain of Mars, and my country’s first Mars exploration mission landing on Mars was achieved. A complete success.

China – People’s Republic of China first Mars exploration mission was formally approved in 2016. It plans to realize Mars circumnavigation, landing and patrol through a mission, conduct global and comprehensive circumnavigation detection of Mars, and carry out regional patrol surveys on the surface of Mars. The Tianwen-1 probe is composed of an orbiter and a landing patrol device. The landing patrol device includes the “Zhurong” Mars rover and the entry module. Since its successful launch on July 23, 2020, the probe completed one deep-space manoeuvre and four midway corrections during the ground-fire transfer phase. On February 10, it successfully implemented Mars capture and entered a large elliptical fire orbit China’s – People’s Republic of China first artificial Mars satellite. On February 24, 2021, the Tianwen-1 probe successfully implemented the third near-fire braking, and after entering the Mars mooring orbit with a period of 2 Mars days, it carried out a global remote sensing survey of Mars and conducted a detailed investigation of the pre-selected landing area. , Detect and analyse topography, sand and dust weather, etc., in preparation for landing on Mars. During the implementation of the mission, the China National Space Administration and ESA, Argentina, France, Austria and other international space organizations and national space agencies have carried out relevant project cooperation. At present, the probe has been in space for 295 days, about 320 million kilometers from the earth.

Mars exploration is highly risky and difficult. The exploration mission faces challenges such as the interplanetary space environment, Mars’ thin atmosphere, and the topography of the fire surface. At the same time, it is affected by long distances and long-time delays. The landing stage has uncertain environments, complex landing procedures and ground Difficulties such as inability to intervene. The Tianwen-1 mission broke through key technologies such as the second cosmic speed launch, interplanetary flight, measurement and control communication, and soft landing on extraterrestrial planets, and achieved my country’s first extraterrestrial planet landing, making my country the second successful landing on Mars after the United States The country is another significant milestone in the development of China’s aerospace- Space exploration industry….

Previously ….天问一号飞運騎遊達达3亿 …….As of 26th   March 2021, CNSA – China National Space Administration- ESA – European Space agency Belt and road initiative mars mission…first Mars exploration mission, Tianwen- Martian Probe One ……. With the China National Space Administration released two sideways images of Mars in the southern and northern hemispheres taken by my country’s first Mars exploration mission, Tianwen-1. In the image, Mars has a “crescent” shape with clear surface texture. The Tianwen-1 probe flew to a distance of 11,000 kilometers from Mars and used a medium-resolution camera to take a panoramic view of Mars. At this time, because the probe is in the sky behind the Mars side (to face the sun as the front), two “sideways” images are obtained. At present, the Tianwen-1 probe has been in orbit for a month, and the high-resolution camera, medium-resolution camera, mineral spectrometer, Mars energy particle Analyzer, ion and neutral particle Analyzer, magnetometer and other loads have been turned on one after another. , Carry out exploration of Mars and obtain scientific data.

The southern hemisphere image was taken by the Tianwen-1 medium-resolution camera on March 16, 2021, Beijing time. At this time, the orbital height of the orbiter was about 11,200 kilometers.

The northern hemisphere image was taken by the Tianwen-1 medium-resolution camera on March 18, 2021 Beijing time. At this time, the orbital height of the orbiter was about 11,500 kilometers….