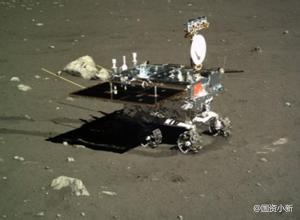 As of 7th April 2021, The CNSA –China National Space Administration Belt and Road Initiative Lunar Mission……Chang’e-4 successfully awakened completed the 29th day At the time when China Land Spring and Jingming, on the far side of the moon, sunlight again spread on the Chang’e 4 lander and the “Yutu 2” lunar rover, which were at 21:43 and 3 o’clock on April 6th. 54 minutes to end the moon night dormancy, awakened autonomously by light, and entered the 29th month day work period. Up to now, Chang’e-4 has spent 825 Earth days on the back of the moon.

As shown in Figure 1, the patrol is currently located at LE02805, which is located in the northwest direction of the landing site of Chang’e 4, which is about 455 meters straight from the landing point, and the travel path of the patrol is about 682.8 meters. Based on the LE02805 point panoramic camera stitched image, DOM image and other data, the lunar rover will continue to move towards the basalt distribution area (about 1.2km from the current patrol device, located at 177.5389° east longitude, near 45.4119° south latitude) during the 29th day of the month. The location is located northwest of the current detection point. Related scientific results will be released in time.

Work planned for this month:

(2) Infrared imaging spectrometer to carry out calibration and scientific detection;

(4) The moon-measuring radar conducts simultaneous detection of the path area during driving.

Previously ….As of 22th March 2021 Monday, The CNSA –China National Space Administration Belt and Road Initiative Lunar Mission……Chang’e-4 successfully awakened completed the 28th day of the work period after the Chinese Lunar New Year – year of the OX  got  back to work  Chang’e 4 completed the 28th day of work……. The Chang’e 4 lander and the “Yutu 2” lunar rover finished their 28th day of work at 2 o’clock on March 21 and at 17:09 Hong Kong – Beijing Time  on March 20, and entered the moon night Hibernate. Up to now, the Chang’e 4 lander and the “Yutu-2” lunar rover have survived 808 Earth days on the moon. The lunar rover travelled about 30 meters during the day and the accumulated mileage was 682.77 meters…

Images and visual are from Weibo..