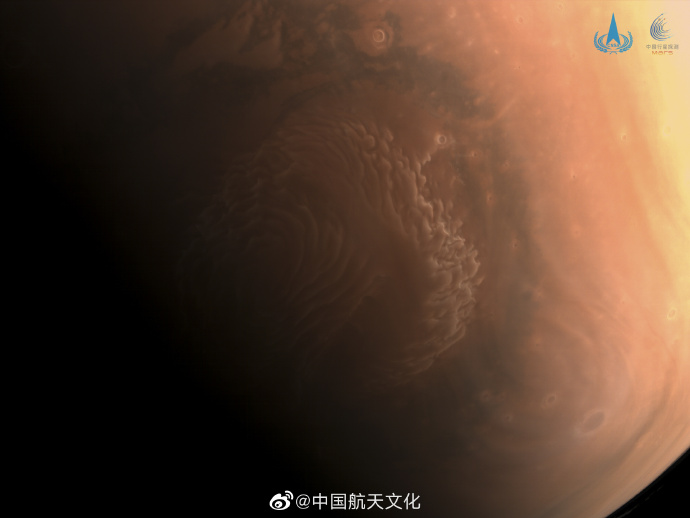 The panchromatic image was taken by a high-resolution camera at an altitude of about 330 kilometers to 350 kilometers from the surface of Mars, with a resolution of about 0.7 meters. In the imaging area, small ring craters, ridges, sand dunes and other landforms on the surface of Mars are clearly visible. The diameter of the largest impact crater is about 620 meters. The color image was taken by a medium-resolution camera, and the picture shows the north pole of Mars.

Starting on February 26 2021, Tianwen-1 has carried out scientific exploration in the parked orbit, and scientific payloads such as the orbiter high-resolution camera, medium-resolution camera, and mineral spectrometer have been turned on one after another to obtain scientific data. The high-resolution camera on the orbiter is equipped with two imaging detectors, which can realize linear array push-broom and area array imaging, and carry out fine observation of topography and landforms in key areas. The medium-resolution camera has the functions of automatic exposure and remote control of exposure adjustment, and can draw global remote sensing image maps of Mars to detect the topography and changes of Mars Tianwen No.1 probe shoots high-definition Mars image…..

Black-and-white or color photos are related to the shooting mode. The high-resolution camera photos are taken by the linear array push sweep method when the detector is running on a large elliptical orbit. They are divided into full color, color, and custom. The full-color (i.e. black and white) image is the clearest, the data volume is the largest, and the scientific value is the highest. The definition of a color image is a quarter of that of a full-color image. After the image fusion processing of panchromatic and color mode, a clear and beautiful color image will be obtained. The medium-resolution camera has only one static shooting mode, which is to use the “gaze” shooting mode, so that the camera has been “gazing” at a certain area, and the overall resolution will be relatively low.

Previously天问一号飞運騎遊達达3亿 …….As of the afternoon Chinese Lunar New Year festival week holidays afternoon 24th February 2021, CNSA – China National Space Administration- ESA – European Space agency Belt and road initiative mars mission…first Mars exploration mission, Tianwen- Martian Probe One  …… At 6:29 on February 24, 2021, the first Mars exploration mission Tianwen-1 probe successfully implemented the third near-fire braking, entering the near-fire point of 280 kilometers, the far-fire point of 59,000 kilometers, and the cycle of 2 Mars. Mars moored orbit on the day. The probe will run on the berth orbit for about three months, and all seven orbiter loads will be turned on and scientific exploration will begin. At the same time, the medium-resolution cameras, high-resolution cameras, and spectrometers in the payload will conduct detailed investigations of the topography, landforms, sand and dust weather in the pre-selected landing area, and prepare for landing on Mars.

Since its successful launch on July 23, 2020, the Tianwen-1 probe has been in orbit for 215 days and is currently 212 million kilometers away from the earth. On February 10, 2021, the probe entered the ring fire orbit, implemented the far-fire point orbit plane maneuver on February 15, and implemented the second near-fire brake on February 20. The current equipment is in normal state and various flight controls Work is proceedingly normally.

Images and visuals are from Weibo …