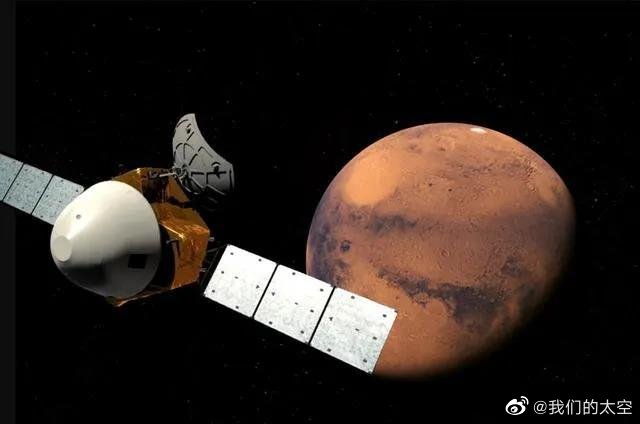 天问一号飞運騎遊達达3亿 …….As of the evening 10th February 2021, CNSA – China National Space Administration- ESA – European Space agency Belt and road initiative mars mission…first Mars exploration mission, Tianwen- Martian Probe One Tianwen-1 successfully implemented Mars capture, China’s first Mars exploration mission to circumnavigate Mars and succeeded] According to the China National Space Administration, at 19:52 on February 10, 2021, China’s first Mars exploration mission, Tianwen-1, was implemented Near-fire capture and braking, the orbiter 3000N orbital-controlled engine ignites for about 15 minutes, and the probe smoothly enters a large elliptical circular fire orbit with a near-fire height of about 400 kilometers, a period of about 10 Earth days, and an inclination of about 10º. The first man-made Mars satellite has achieved the goal of “orbiting, orbiting, and patrolling” the first step, and successfully orbiting Mars.

After the first Mars exploration mission entered the Mars capture phase from the ground fire transfer phase, the medium-resolution camera, high-resolution camera, magnetometer, mineral spectrum Analyzer, ion and neutral particles and energy particles carried by the Tianwen-1 orbiter the payloads such as sounding instruments will continue to work to carry out multi-dimensional exploration of Mars…..

Since its successful launch on July 23, 2020, the Tianwen-1 probe has accumulated 202 days of flight, completed 1 deep-space manoeuvre and 4 midway corrections, and had a flight mileage of approximately 475 million kilometers upon reaching Mars, and a distance of approximately 1.92 from Earth 100 million kilometers, the one-way delay of device-to-ground communication is about 10.7 minutes, and each system is in good condition. Subsequent Tianwen-1 will undergo multiple orbital adjustments, enter the Mars mooring orbit, and carry out pre-selected landing zone exploration. It is planned to choose an opportunity to land on Mars and carry out inspection exploration from May to June 2021.

Previously天问一号飞運騎遊達达3亿 …….As of the evening 5th February 2021, CNSA – China National Space Administration- ESA – European Space agency Belt and road initiative mars mission…first Mars exploration mission, Tianwen- Martian Probe One …… The Tianwen-1’s flight mileage exceeded 465 kilometers…..in which its expected landing for the Tianwen-1 to land on Utopia Planitia just before the Chinese Lunar New Years for the Year of the OX on  12th February 2021 landing on 10th February 2021….. In which it photography of first image of the rustic planet of Mars in which is roughly half the diameter of planet Earth…