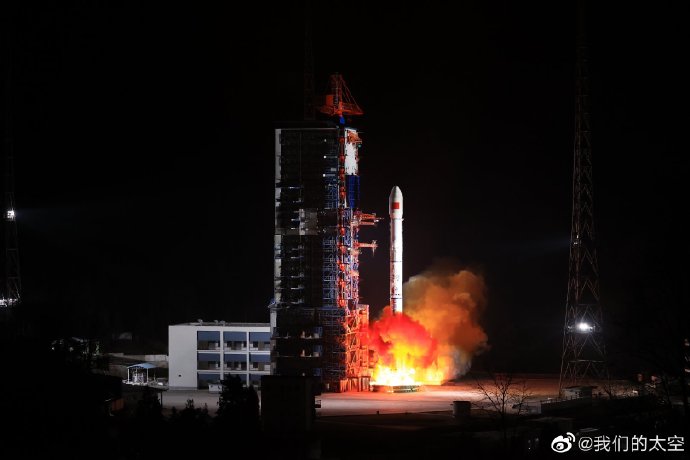 Launching from  Xichang Satellite Launch Center, the Long March 3B carrier rocket lifted the communication technology test satellite Number six went straight into the sky. Subsequently, the satellite was successfully sent into the predetermined orbit, and the launch mission was a complete success. This is also the last aerospace mission of the Aerospace Science and Technology Group before the Spring Festival of the Ox.

Previously before- Prior the launching of the Long March 3B –Chang Zheng 3B Carrier Rocket in its assembly there was an here is an episode in this launch. On the eve of the communication technology test satellite 6 being transported to the Xichang Satellite Launch Center, the three air transport plans prepared in advance by the test team could not be used due to various reasons. This means that the test team must be ready to change air transport to land transport.

Everything is ready, just wait to go. At this time, the railway side sent another notice: the section of the train passing by requires maintenance. If you have to wait for the repair of the originally scheduled section to be completed, the departure time will have to be delayed; if you want to change to another section, the train carrying the box is too wide for the alternative section, and there are some narrow caves…..

In order to start as soon as possible, the test team launched the fifth set of plans: detours. The satellite platform and the payload are operated separately, the platform is on the highway and the payload is on the railway. This involves road transport. “When we learned that the air transport plan would not work, we tried it on the road, and we had a good idea of ​​all the data.” Ji Hongxia said.

The road transport fleet and the railway transport train set off in sequence, and arrived in sequence as planned. The test crews on the two transportation lanes were all haggard, but the satellites on the car were in stable condition. Upon arrival, after unpacking inspection, the satellite’s various status indicators were normal-the test team’s transportation research was a complete success