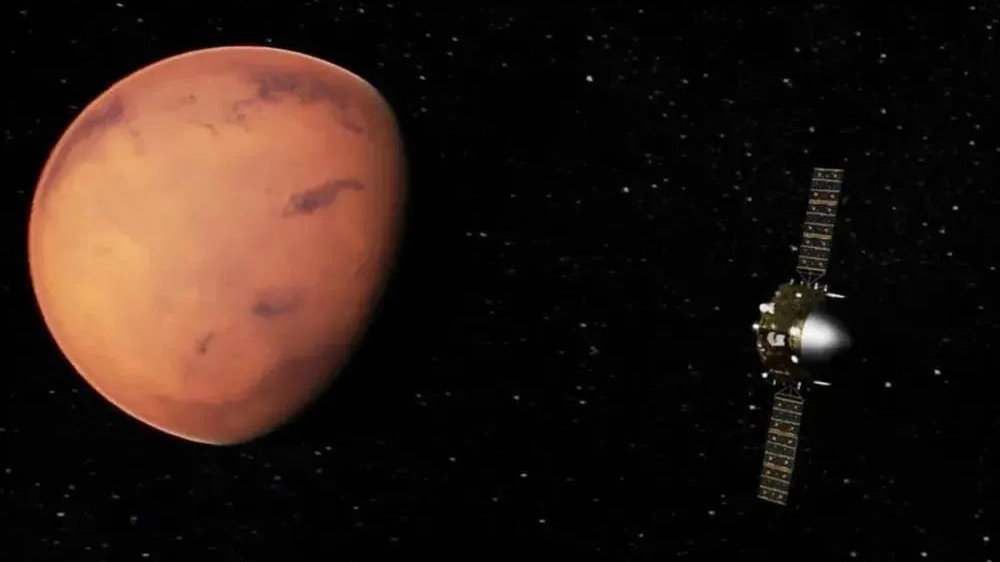 The Tianwen-1 mission is the first step in China- People’s Republic of China independent interplanetary exploration. It will “circle, land, and patrol” Mars through a single launch, that is, Mars orbit, Mars landing, and fire patrol. The Tianwen-1 probe has a total weight of about 5 tons and is composed of an orbiter and a landing patrol device. The landing patrol device mainly includes an entry module and a Mars rover. At present, the orbiter has completed the third on-orbit self-check, and all systems are working normally…..

The hometown is far away and the goal is getting closer. 100 million kilometers is equivalent to 2,499 the length of the earth’s equator. Now, Tianwen-1 is flying to Mars at a ground speed of 17.4 kilometers per second…….

Previously………天问一号飞運騎遊達达3亿 …….As of the previously morning Tuesday of November 17th, 2020, CNSA – China National Space Administration- ESA – European Space agency Belt and road initiative mars mission…first Mars exploration mission, Tianwen-1, has been in orbit for 116 days, with a flight mileage of more than 300 million kilometers. The earth is approximately 63.8 million kilometers. The detector’s attitude is stable, the energy is balanced, some sub-systems have completed self-checking, and each system is working normally.

During its orbital flight, Tianwen-1 has completed three midway corrections and one deep-space manoeuvre and other flight control tasks. In early November, the landing patrol vehicle entry module and multiple sub-systems of the Mars rover completed the first on-orbit self-check, and the results were normal.

Tianwen-1 is scheduled to reach Mars in February 2021 and carry out Mars capture. In May 2021, it will choose an opportunity to de-orbit, and the landing patrol will be separated from the orbiter, soft landing on the surface of Mars, the rover will leave the landing platform, and the inspection will be carried out…. For the Martian exploration..

Previously On the 9th October 2020 Friday 2300 hours Beijing time CNSA – China National Space Administration that under the control of the flight control team of China’s first Mars exploration mission, the main engine of the Tianwen-1 probe was ignited. In more than 480 seconds, the deep space manoeuvre was successfully completed. The orbital manoeuvre was carried out in deep space approximately 29.4 million kilometers from the earth. The orbit design of Tianwen-1 comprehensively considered various constraints from launch to Mars capture and made the propellant consumption as small as possible, and adopted the strategy of a deep space manoeuvre during the transfer process. The probe will rendezvous with Mars about 4 months after its current orbit, during which two or three midway corrections will be implemented……

Previous the last course correction … during On October 1st 2020, as China- People’s Republic of China also throughout the Chinese also the Asian Communities celebrates the National Day and Mid-Autumn Festival; CNSA China National Space Administration released China’s first Mars exploration mission Tianwen-1 exploration….. The image of the CNSA Belt and Road Initiative European Space Agency collaboration Martian Probe flying, the five-star red flag on the picture is dazzling, showing a bright Chinese red. This is the first deep space self-portrait of our country 天问一号 Martian probe. In the vast universe, the silver landing patrol device and the golden orbiter are shining brightly. Tianwen No.1 uses this to report safety to China and express birthday wishes.

As we all know, when taking selfies on the ground, you can use auxiliary tools such as selfie sticks to shoot after choosing the angle, light and shadow, but the selfie of “Tianwen No. 1” is not that simple. Due to its large size, if the selfie stick strategy is adopted, “Tianwen No.1” needs to use a 15-meter-long selfie stick to achieve a full-view selfie, which not only consumes resources, but is also prone to safety risks. For this reason, the Mars Orbiter Engineering Survey Sub-system Team of the Eighth Academy of Sciences proposed a “separated monitoring plan”, which is to “throw out” a light camera under suitable lighting conditions to take pictures of “Tianwen No. 1” and transmit the images in real time. Go back to the “Tianwen No. 1” probe.

Have you seen a one-time dual-head super wifi camera?………In order to successfully implement the separate monitoring program, the Eighth Academy Mars Orbiter Engineering Measurement Sub-system team needs a little guy who can “divide, shoot clearly, pass back, and hold on”: use a small, small, low-impact unlocking separation device The camera can be “divided out”; the use of colour imaging, the configuration of 800×600, 1600X1200 two-level resolution camera allows the image to be “clearly captured”; the use of super Wi-Fi communication that can achieve 400 meters of wireless communication allows data “Passed back”; the use of disposable batteries that can provide power for longer than 1 hour allows the camera to “hold on”, allowing the ground to see the full picture of the “Tianwen No. 1” rushing to the fire.

Considering that the camera may turn over as it gradually moves away from the detector, the development team designed the camera as a dual-headed front and back to ensure that the camera can capture as many detector images as possible during the turning process. After four years of research and development, this little guy weighing about 950g successfully carried the “Tianwen-1” Mars probe into space, and successfully separated the head weighing about 680g, and obtained a clear image. Successfully completed the overall visual monitoring task of “Tianwen No. 1”