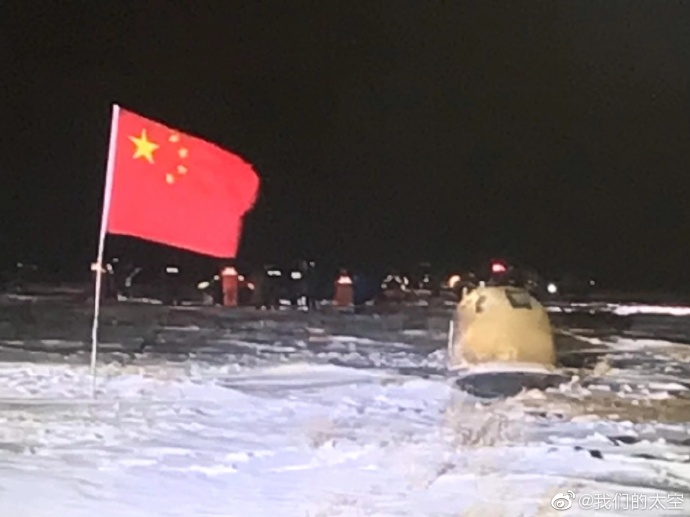 At about 1 am, the Beijing Space Flight Control Center injected high-precision navigation parameters into the Chang’e-5 orbiter and returner combination through the ground measurement and control station. After that, the orbiter and the returner were normally unlocked and separated at a height of about 5,000 kilometers above the sea level of the South Atlantic, and the orbiter completed the evasion manoeuvre as planned. At 1:33 in the morning, the Chang’e-5 returner entered the Earth’s atmosphere at a high speed close to the second cosmic speed (about 11.2 kilometers per second) at a height of about 120 kilometers above the ground, and performed the first aerodynamic deceleration. After descending to a predetermined height, the retractor jumps up out of the atmosphere and begins to glide down after reaching the highest point. After that, the returner enters the atmosphere again and performs a second aerodynamic deceleration. When descending to a height of about 10 kilometers above the ground, the retractor opened the parachute to complete the final deceleration and maintain a stable attitude, and then landed smoothly in the predetermined area. The technical personnel of the measurement, control and recovery system responsible for the search and recovery task discover the target in time and carry out the recovery work in an orderly manner.

According to the plan, the recovered Chang’e-5 returner will be airlifted to Beijing to open the cabin after completing the necessary ground handling work to take out the sample container and the cargo. CNSA China National Space Administration will select the opportunity to hold a handover ceremony to officially hand over lunar samples to the ground application system. It’s is the first China- People’s Republic of China  first extraterrestrial celestial body sample storage, analysis, and research related work will also start.

During the duration of monitoring   and tracking …..Huashan, the forecast of the landing point has been issued…….At around 2 o’clock on December 17 Thursday, 2020, in the command hall of the Technical Department of the Xi’an Satellite Measurement and Control Center, tracking the progress successfully escorted the Chang’e 5, which had been traveling in space for 23 days, back to the embrace of returning to  China ! It is understood that in this mission, the Xi’an Center is mainly responsible for high-precision orbit determination, long-range guidance strategy calculation for lunar orbit rendezvous and docking, calculation of lunar ascent windows, and lunar return to landing prediction. Among them, the calculation of the long-range guidance strategy of the lunar orbital rendezvous and docking and the calculation of the lunar ascent window are the first in my country…

Also during the Duration Tracking is also Yuanwang 3 ship will escort Chang’e 5 through a term for re-entry as the “black barrier”…. When Chang’e 5 returns, it will use the “earth-moon free return orbit” landing technology commonly known as the “drift” orbit. Because it is close to the second universe speed, It will enter the black barrier due to high-speed flight and atmospheric friction, and in the black barrier area will bounce up under the block of the dense atmosphere, be “bounced” back into space by the upper atmosphere, and then enter the atmosphere again for normal landing. At present, the Yuanwang 3 ship is in the Indian Ocean mission area to prepare for the telemetry, external survey, and optical measurement missions near the “black barrier” of the Chang’e-5 returner’s first re-entry into the atmosphere…..